For terrorists like Brenton Tarrant, acting in the name of “racial survival,” human life has no value unless it is the life of their own ethnic group.

Very few people probably still remember William Luther Pierce. Even in the United States, he is largely forgotten, except perhaps on the fringes of the American extreme right — and among their detractors. Yet he continues to be one of the most influential points of reference for the ultra-racist right, largely because of his 1978 novel, The Turner Diaries. The book is available for download on numerous sites, including — nomen est omen — “Wrath of the Awakened Saxon.” And for good reason. The novel describes the (ultimately successful) attempt of a secret organization to provoke a race war that leads to the takeover of the US by white nationalists, followed by an all-out war of extermination of all non-whites on a global scale.

It is unclear whether Brenton Tarrant, who killed 50 Muslim worshippers at two mosques in Christchurch, New Zealand, has ever come across the book. Nothing in his “manifesto” indicates that he has. Yet his monstrous actions on March 15 sprung from the same obsessive, paranoid, dystopian spirit that infused The Turner Diaries — and which, sad to say, has increasingly come to infect the spiritual situation of our times in Europe, parts of North America and, apparently, the Antipodes.

It is hardly coincidental that Tarrant entitled his manifesto “The Great Replacement,” the English translation of a French book by the extreme-right writer Renaud Camus, which has proved highly influential among the Western European radical right. The idea is hardly new. Already in the late 19th century, French intellectuals charged that the French nation was being suffused by “the foreign element” (Jews and, increasingly, migrant workers), which appeared “to force itself upon the indigenous element.”

In response, they advanced an ethno-nationalist creed (nationalisme ethnique), which made “belongingness” to the nation dependent on an individual’s “rootedness” in soil, lineage and shared history. With the rise of Jean-Marie Le Pen’s Front National in France, “rootedness” (enracinement) and, particularly, its opposite “uprootedness” (déracinement) became central to the national populist discourse of the political radical right. And with it, the discursive creation of an antagonistic frontier opposing ordinary people who are conscious of, and close to, their roots and a “rootless” cosmopolitan elite.

All of these tropes, in one way or another, can be found in Tarrant’s manifesto. From this perspective, the Christchurch massacre follows a certain logic as the violent eruption — coldly calculated and executed — of an ideational doctrine pushed to its ultimate limit. In his manifesto, Tarrant promotes himself as an ethno-nationalist, the massacre as the action of a “partisan” fighting against “an occupying force” of “invaders.”

Again, this is nothing new. The characterization of migrants as invaders intent on subverting and ultimately subjecting the host country to foreign rule has been a central trope in contemporary radical right-wing populist discourse for decades. What has given it new urgency are two developments of more recent past: the growing and increasingly visible presence of Muslim minorities in liberal democracies, and a growing awareness that the days of global white supremacy are inexorably coming to an end. Throw in stagnant if not declining birth rates throughout the West (reflected in the “white panic” in the US in the face of demographic shifts) — informed by, among other things, growing pessimism with respect to the future — and you come to appreciate the sense of malaise and moral panic that is, to a large extent, behind the widespread political disaffection that has infected Western liberal democracies.

Even a superficial perusal of the results of pertinent surveys reveals the depth of the malaise. In January, for instance, some 50% of respondents agreed that they feared that “our culture in Germany is getting lost,” that “the influence of Islam in Germany” was getting too strong” and that Germany was too rapidly changing.

Germany is hardly exceptional. Throughout Western Europe, a significant portion of the population feels threatened by the growing presence and visibility of Islam in their daily lives. In Switzerland, for instance, between 2004 and 2017, the number of respondents who said they felt threatened by the country’s Muslim community (400,000) increased from 16% to 38%.

Under the circumstances, the appeal of the radical populist right’s anti-Islamic message is hardly surprising. Promoted by nativist entrepreneurs such as the Dutch politician Geert Wilders and Austria’s Heinz-Christian Strache via catchy slogans like Abendland in Christenhand (the West must remain in the hands of Christians) and provocative posters, anti-Islamic rhetoric has spread throughout Western and central Europe and beyond.

Not a Delusional Madman

It is hardly a coincidence that it was a white, Anglo-Irish Australian to commit the worst mass murder in New Zealand history. After all, the return of Australian Senator Pauline Hanson onto the national political stage was, to a large extent, owed to her jumping onto the anti-Islamic nativist bandwagon. It was only logical that Hanson — draped in a burqa before the Australian Senate — would call for a “Muslim ban,” emulating her European allies who have called for numerous bans, ranging from the construction of mosques and the public display of burqas and niqabs to the Quran itself.

For the extreme right, the fact that none of these measures — with the notable exception of the burqa ban — has become national law is not owed to the fact that there are no majorities for them, but to the ill will of cosmopolitan elites conspiring to bring in as many immigrants as possible, for the simple reason that they despise the “native” population and have nothing but contempt for what “ordinary people” want (such as a dramatic limitation of immigration). It is telling that in his manifesto, Tarrant points to the defeat of Marine Le Pen in the second round of the French presidential election of 2017 as one of the events that convinced him that nothing could be expected from politics.

It would be a grave mistake to dismiss the Christchurch carnage as the act of a delusional madman. The history of Nazism has shown that even highly-educated academics — professors and medical doctors — are quite prepared to commit the most horrific crimes, all in the name of an apocalyptic ideology. It has been pointed out that Tarrant did not even spare children. Against the background of the Nazi experience, this should hardly come as a surprise. After all, the Nazi butchers, many of them “ordinary Germans,” had no qualms to exterminate even Jewish babies, if only to prevent them from growing up to take revenge on their tormentors.

For terrorists like Tarrant, acting in the name of “racial survival,” human life has no value unless it is the life of their own ethnic group. Pushed to the brink for whatever reason, they will lash out, whether in the name of revenge or in the hope that their actions will trigger a violent response from the other side, leading to an all-out war between “natives” and “invaders.” One can only hope that the Christchurch massacre won’t serve as an inspiration for emulation. Given the rather gloomy atmosphere in much of the West, I am skeptical. 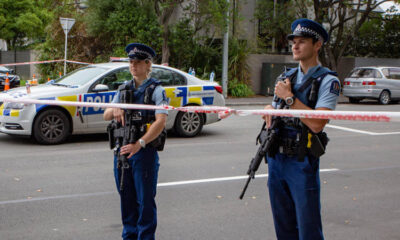 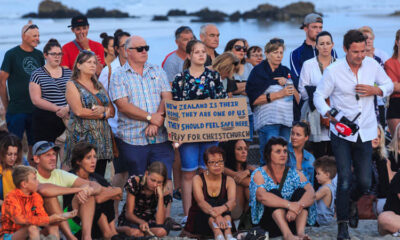