With claims of genocide in Myanmar, the international community has failed to usher the country through its democratic transition.

Al Jazeera English recently broadcast a documentary, which was supported by a Yale Law School report, that accused the Myanmar government of an orchestrated campaign to trigger communal violence, and it claimed there was “strong evidence” of genocide against the Rohingya, a Muslim minority situated in the country’s Rakhine State.

Much of what the report discusses is nothing new to those who have been following the issue over the last few decades. To some extent, the findings justify the fears of many who had warned that Myanmar’s journey of “transitional democracy” was at best weak or at worst a superficial attempt at misleading the international community.

What the report and documentary do highlight is the embarrassing situation world powers find themselves in having not heeded these warnings.

Led primarily by British Prime Minister David Cameron and US President Barack Obama, the international community has fallen over itself to “reengage” with Myanmar and to normalize relationships, while fulfilling childhood fantasies of meeting Nobel Laureate Aung San Suu Kyi. In this haste, countries such as Britain and the United States have turned a blind eye to the violence meted out to the Rohingya and have had muted responses to the Andaman sea refugee crisis earlier this year.

Much has been made about the transition to a democratic process after the first set of elections in 2010, which brought to power the military’s civilian proxy, and the first free and fair elections for 25 years taking place on November 8, 2015. It was assumed that that this would be the watershed moment for democracy in Myanmar. Yet the ban on voting for minority groups like the Rohingya casts a shadow on what is already a deeply contested and controversial process.

In its quest to encourage Myanmar to come in from the cold, the international community somehow failed to remember simple things. The country needed to conquer the longstanding fear of outsiders—an effect of decades of isolation, with an internalization of the regime’s propaganda. The fact that the population, which has so far been insulated, would have to learn to interact with far more non-Burmese, non-Buddhist and indeed Muslim communities should have been handled during this transition, offsetting the rhetoric coming out of the Buddhist clergy.

The report also exposes a weakness in the process the international community proposes as a country transitions into becoming more open. As with what happened in the Central African Republic, the emphasis is usually on holding elections as this seems to be the litmus test of democracy and a return to some normality.

However, as with many other countries in the region, democracy is not just about holding elections. It is about understanding the concepts of shared societies, which means developing socially cohesive societies that respect diversity. This process about understanding universal democratic principles and human rights should have been the focus, as opposed to allowing the consolidation of power based on religious-ethno-nationalist markings.

In From the Cold

There are some serious questions we must ask ourselves: Have our own perceptions of the pro-democracy movement been colored—in terms of representing their battles against the junta as some sort of pure quest of good vs evil—when all they represented was just an opposition to the regime but not necessarily anything better? Did we mistake their opposition to the junta to be an acceptance of universal human rights and a commitment to tolerance?

These questions point to a deeper malaise within Burmese society that needs to be tackled, perhaps even from a deep theological basis.

This offers little respite to the people on the ground at the receiving end of violence. The fear is that the crisis will continue, thereby leading to another wave of refugees—or worse to support radicalization and militancy in the region.

The international community faces an interesting paradox: How do world powers deal with a new government in Myanmar knowing fully well that a portion of the voters were excluded? Should the ruling party return to power, how could they be dealt with knowing that they orchestrated a genocide campaign? Should Suu Kyi’s party come to power, how does she morally and ethically stand up to the scrutiny that she will be under to act on the report’s findings?

Either way, these are all unanswered questions that point to an uncertain future for Myanmar, its democratic journey and its treatment of minorities, especially the Rohingya.

Much of it lies in economic and security interests that Myanmar offers, particularly for world powers. Countries like Britain—as has been recently illustrated with the visit of the Egyptian president—are much more immune to these concerns, especially if there is an economic interest involved.

Whichever government comes to power following the November 8 elections in Myanmar, it will be one that is diluted by the fact that a portion of the voters were disenfranchised and that the lead-up to the vote was marred by an orchestrated campaign of genocide. The international community should do well to remember this when it engages and further encourages Myanmar to come in from the cold. 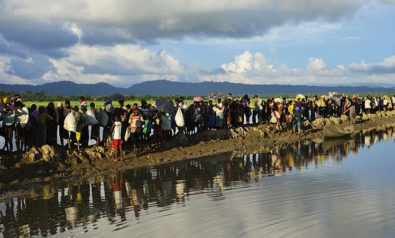