With elections expected in summer 2016, questions are being raised over Somalia’s electoral record.

Somalia’s political recovery will be tested in the lead-up to the 2016 national elections. It is widely agreed that the possibility of “one-man, one-vote” is both unrealistic and impractical. The war-torn, fragmented East African nation of 10 million people is not new to pseudo-democratic election processes. Since 2000, Somalia has used a strange and unfair power-sharing scheme among the country’s so-called “majority and minority clans”—an alien system known as the 4.5 formula.

At the Arta Peace Conference, held in Djibouti in 2000, Somali political leaders agreed to the 4.5 formula to distribute national parliamentarian seats. By then, over a dozen Somali “peace conferences” were held, and faction leaders sought a political solution to clan power struggles in post-war Somalia.

Three subsequent national elections—one held in Kenya in 2004, again in Djibouti in 2009 and a third in Mogadishu in 2012—used the 4.5 formula as the basis for selection of national members of parliament (MPs). Reporting on Somalia’s 2012 elections, The Guardian wrote: “The magic number is 4.5, a formula that acknowledges the primacy of Somali clan loyalties, ensuring that the spoils of power can theoretically be divided between the four main groups — the Hawiye, Darod, Dir, and Rahaweyn — and the ‘others’, an amalgamation of smaller clans.”

The formula essentially divides the Somali people into five distinct groups and distributes national MPs based on an irrational and simplistic arithmetic to supposedly balance political power. The MPs, traditionally selected by clan elders through a system of patronage, are empowered to elect the president of Somalia and perform other parliamentary obligations.

President Hassan Sheikh Mohamud has, both tacitly and through proxy, supported a return to the 4.5 formula. However, other political entities, including Puntland state in the country’s north, have proposed a region- or district-based election model—a community-driven initiative that was similarly used to establish state parliaments in Puntland, Jubaland, Galmudug and Southwest. State parliament seats are distributed to districts within each state and, while belonging to a “clan,” all MPs in the state parliaments represent a district seat.

This hybrid tradition-democratic system used at the level of regional states has not been replicated in national politics. For the past 15 years, and despite its own shortcomings and its origin as a transient political compromise, the 4.5 formula has helped transition Somalia from a period of lawlessness toward governance and representative national institutions. However, critics blame it for institutionalizing the clan system, further polarizing local and national politics, and reigniting local conflicts. 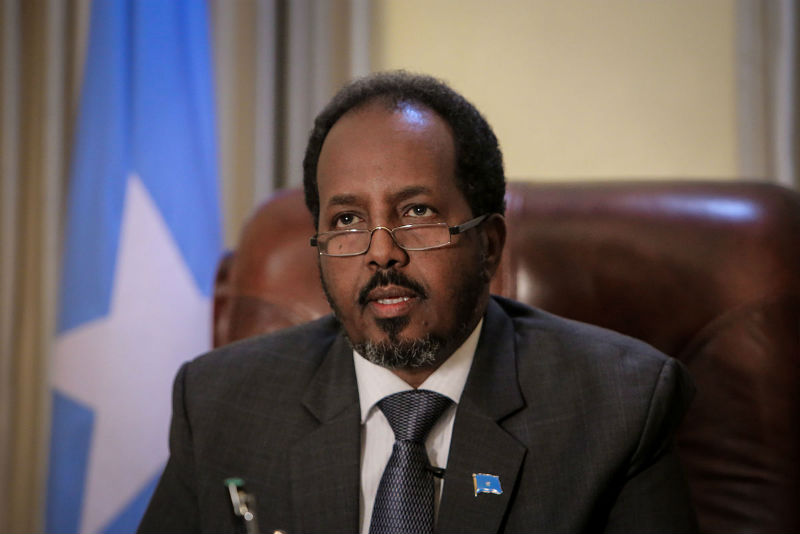 Today, as the country prepares for elections in August 2016, the formula has incited debate and a divergence of opinions that largely align with Somali leaders’ policy positions, threatening to further polarize a deeply divided society and fractious politics. To make matters worse, President Mohamud’s two-year term extension proposal, cleverly referred to as “enhanced legitimacy,” has also provoked public frustration.

The path to the 2016 election is undoubtedly fraught with uncertainties, with regard to the election model and the question of political representation. International Crisis Group, a Brussels-based think tank, warned in April 2015 that “despite relentlessly upbeat messages and some advances in other sectors, the SFG [Somali Federal Government] and its institutions, especially Parliament, have made little real progress on key electoral preparations.”

Three months later, in July, the Federal Government of Somalia (FGS) and Federal Parliament issued a joint statement ruling out popular elections, but falling short of proposing an alternative. Instead, a National Consultation Forum (NCF) was formed, comprising federal and state leaders. The NCF has met in Mogadishu and more recently in Kismayo to engage in deliberations about an election model, resolving inter-state boundary disputes, and building the foundation for the 2016 electoral process.

However, the Kismayo meeting concluded on January 16 without any tangible agreement on the electoral process. According to a vaguely-worded communiqué, the NCF leaders “made progress in negotiating an agreeable compromise,” further delaying a decision.

The imperativeness of political inclusion

In 2011-12, Somali political leaders achieved a number of important milestones by working together to negotiate a Provisional Federal Constitution (PFC), which the National Constituent Assembly ratified later that year. It is hoped that NCF leaders will deliver that same spirit of cooperation that culminated in the challenging task of ending the 12-year transitional period in Somalia.

While the controversial scheme was used to select Federal MPs in 2012, the Garowe Principles stipulates that: “The 4.5 formula shall never become the basis for power sharing in any future political dispensation after the above-mentioned term [2012-16] concludes.” More importantly, the PFC makes no mention of the 4.5 formula as a basis for political power in Somalia.

In the historical election of 2012, new MPs unseated former President Sharif Sheikh Ahmed and elected President Mohamud to lead the FGS. The current government carries an additional burden after gaining international recognition as the country’s first permanent government in 22 years. But the public euphoria that followed Mohamud’s election—touted as a civilian, an educator and a progressive who lived in Mogadishu during the devastating civil war years—slowly disappeared after the president engaged in divisive politics and alleged corruption, and replaced two prime ministers in two years.

Somalia has long been considered to be among the world’s foremost “ungoverned spaces,” and the international community prescribed a range of “First Aid” policy options…

In effect, Mohamud was continuing a vicious tradition of cutthroat politics that breeds widespread social discontent and political unrest. He soon learned that traveling to London or Washington as Somalia’s “new hero” did not amount to national legitimacy. In reality, his administration became like its predecessors, crippled by partisan politics and characterized by political infighting and failure in many of its security and state-building objectives.

But the nation’s present condition is not completely the fault of any single leader or administration. Somalia has deep problems—in reconciliation, fair politics, institution-building and economic opportunities—and the FGS was doomed to fail from the onset. A government largely reliant on foreign military muscle and foreign aid cannot be the expressed guarantor of Somalia’s national sovereignty. The African Union Mission in Somalia (AMISOM) is funded to the tune of $50 million a year, an expensive endeavor in a world that is increasingly in need of peacekeeping operations.

In 2014, the United Nations and other international agencies received $400 million—after requesting $933 million in a consolidated appeal for Somalia—and implemented numerous projects in food security, water, health, education and other social sectors throughout Somalia, with the US donating 24% of total humanitarian aid. In 25 years of political unrest, the provision of basic services and the mitigating of humanitarian and environmental crises have largely depended on international assistance. Hence, without relying on its own security capacity and revenue base, the FGS cannot exercise sovereign rule and can only be a participant at a table shared with international partners.

In May 2015, US Secretary of State John Kerry briefly visited Mogadishu’s Aden Adde International Airport, in a trip designed to shore up international support for the struggling government of President Mohamud. While meeting with the president and the prime minister, Secretary Kerry said: “We all have a stake in your success. The world cannot afford to have places on the map that are essentially ungoverned.”

Somalia has long been considered to be among the world’s foremost “ungoverned spaces,” and the international community prescribed a range of “First Aid” policy options: humanitarian interventionism in the 1990s; failed nation-building programs; and, most recently, a militarist approach to “neutralize” threats of terrorism and maritime piracy. However, no external approach solved underlying roots of the Somali conflict, a responsibility that only the Somali people—through their leaders and institutions—can shoulder.

The reality is that Somalia ceased to be a monolithic entity after the state collapsed in 1991, with separatist movements, autonomous regions and armed factions emerging to replace centralized rule and fill the power vacuum. In a September 2015 report, the London-based Chatham House policy institute concluded that “for the purposes of reaching a durable settlement, the existing and developing political realities on the ground [in Somalia] will need to be accommodated.”

International concerns of threats emanating from “ungoverned spaces” are valid and, therefore, draw attention to the necessity of bolstering local capacity to address roots of conflict and disorder, including community reconciliation, conflict resolution and the promotion of representative democracy, rule of law and wealth sharing.

Additionally, and equally important, a national process of justice that addresses war crimes and human rights abuses must commence, at all levels, to end impunity and ensure that criminals and war profiteers face justice in Somalia.

This is the only viable path toward a long-term peace that restores the nation’s sovereignty and reverses the trend of political instability and violence triggered by state collapse. Only a representative, responsible and accountable Somalia can placate international concerns and ensure competing foreign policy intentions and practices do not harm the nation’s long-term stability and future prospects.

The 4.5 system had its 15-year shine, and like all things transitional, it must end to allow Somali constituencies in regions and districts to choose their MPs in the Federal Parliament. The 2016 election is definitely a major test for Somalia’s path to political recovery, but it is not an insurmountable task.