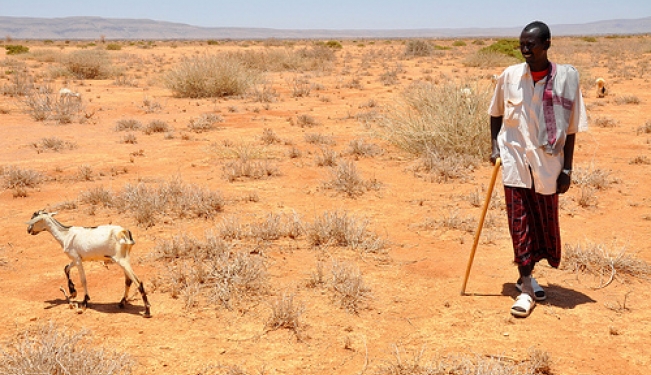 The first in a series of personal observations by an American teaching English in newly formed de facto state of Somaliland. From the days of yore, travellers like Ibn Battuta and Xuanzang have provided a window to a different culture…

Yesterday, while resting after completing my daily ritual of shooting a basketball at the rickety hoops Suzanne and I assembled, sans wrenches, last week for the new girls’ basketball court, one of the 10th grade students visiting for the day decided to give Jake, John and I a lesson in recent Somali history.

Coming to this country several weeks ago, I realized I knew practically nothing about the history of the region, be it the tumultuous events of the past few years, or the earlier story of a place that went from being one of Africa’s most promising countries, to the world’s most famous failed state. Seeking to remedy my surprising ignorance, I procured a copy of I.M. Lewis’ A Modern History of the Somali, one of the few comprehensive texts on the Somali people, thankfully on hand in the school’s library for Stephanie to use in her African history course. Lewis, a social anthropologist by discipline, is probably the leading scholar on the Somali people, a nation unfortunately split between five “states”, from Northern Kenya, the Ogaden desert of Ethiopia, and Southern Somalia, to Somaliland and Djibouti in the north.

As any scholar of history, ethnicity, and nationalism will tell you, the misalignment of nations and the modern boundaries of states, often as a consequence of ignorant, malicious, or simply uncaring Western colonial decisions, is one of the chief drivers of conflict in today’s world and often a recipe for recurring disaster. The Somali nation, a uniquely dismembered people in terms of the state boundaries imposed upon them, suffer the further complications of their unique position at the intersection of Africa and the Middle East; a crossroads of religion and commerce notable equally for the value of the bountiful goods that pass by its shores as for the starkness and unforgiving caprice of its desert environment.

Jumping into Lewis’ work toward the end at the chapter titled “Nationalism, Ethnicity, and Revolution in the Horn of Africa”, and reading on to “Chaos, International Intervention, and the North”, I came to respect the incredible complexity that modern Somali history has contained, playing host to foreign influences from near and far, while struggling with its own many identity crises between the traditional clan structure and radical new forms of government under Military Dictator General Siyad Barre’s promotion of Scientific Socialism. Making my way through a fairly dense text that at times seemed to gloss over major events like the beginning of the Somali Civil war and the flight of General Barre, while explicating in detail the Machiavellian maneuvers of Barre’s inter-clan positioning and foreign policy dilemmas, I arrived at a better understanding of the diverse obstacles that have been thrown in the way of Somalia’s development as a modern nation. The complex milieu of sub-clans, political leaders, warlords, militant movements and shifting alliances is difficult to reconcile into one cohesive narrative, so I won’t attempt it.

However, the 10th grade student, Abdurrahman, managed quite well in his own limited vocabulary to explain to us on the basketball court what this conflict has meant to him in his short 15 years.

Growing up in Somaliland, stable since its self-declared independence in 1991, Abdurrahman has watched the southern part of his country fall apart in stops and starts. Relating the perspective of a friend who lives in Mogadishu, where not a night passes that does not involve gunfire and the blasts of munitions, he tells how his friend’s visit to Hargeisa was met with astonishment at the peace and quiet that allowed him to sleep through the night undisturbed. According to him a similar peace was achieved for a brief 6 months in the south in 2006, when the Islamic Courts Union succeeded in expelling the violent warlords from Mogadishu and achieving some measure of stability for the beleaguered capital. This peace was shattered by the US-backed Ethiopian invasion that reignited the conflict and re-opened the door to the warlords and to Al-Qaeda, ushering in the past 4 years of near constant violence in the ravaged city that was once the jewel of Africa.

Supplementing this 15 year olds views was an article from the Nation shared with me by a friend from home, detailing the extensive support the US has given the capricious and self-concerned warlords that have battled each other for their control of the area, leading to the rise of Al-Shabab and its tactics of terror. This article is eye-opening, not only for the mercurial nature of the alliances and loyalties of many key figures in the conflict, but for the level of foreign, in particular US, involvement in the region, exemplifying a policy of intervention and secret dealings that has had much the opposite effects to those intended by US strategic aims. It’s hard to see much distinction between the uninformed backing of factional leaders today that accentuate divisions between clans and militarize their differences, and the partition of the Somali people between five states by the colonial powers many years before, leading to the conclusion that Western policy in the Horn of Africa remains essentially misguided, and unchanged.

Cause for much more hope, and debate, is Abdurrahman’s pronouncement that he longs for the day of a unified Somalia, an unusual viewpoint seldom heard in Somaliland which is fiercely protective of its tenuous sovereignty and marked separation from the chaos to its south. Whether it reflects the hopeful naiveté of a 15 year old unmarked by the brutal cleavages that have arisen between so many, or a powerful sentiment for reconciliation in the face of so much division, Abdurrahman’s dream is invaluable, for it represents a generation on the rise, and one, as far as he is concerned, determined to seek his education abroad, but then return to his country, for his cause is with his people.