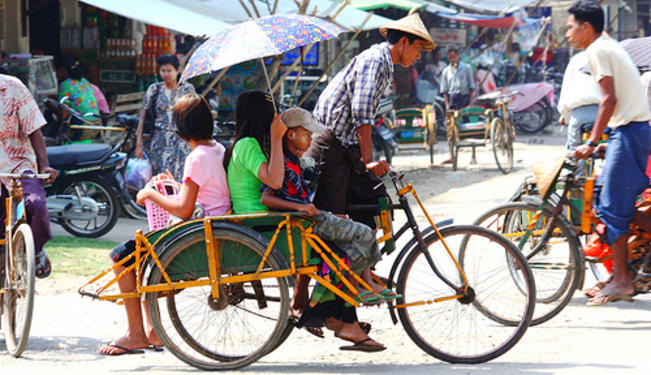 The recent violence against the Rohingya minority in Myanmar has brought to the fold the hidden tensions within a society long isolated from the international community. This is part two in a series of two articles. Read part 1 here.

Presently leading the anti-Rohingya charge in Myanmar is the Rakhine [Arakan] Nationalities Development Party, which came second in the last general election of November 2010. Statements released by the party have not only called for swift action to segregate the Rohingyas from the Arakanese and eventually resettle them overseas, but also for Myanmar to emulate Israel in the way the latter deals with the Palestinians. However, the party is not alone and other religious figures and veterans of the pro-democracy movement have had a hand in stirring tensions, by using language reminiscent of that which accompanied the Nazi pogroms. Groups like the UK-based Burma Democratic Concern have resorted to wild fear mongering, alleging that the Rohingya have massacred “tens of thousands of Burmese Buddhist Arakanese in the past”, while others argue that Myanmar cannot support a “refugee” population.

This current conflict has also had other less conspicuous effects. Most importantly, it has triggered a dramatic realignment of political allegiances in the country. Many so-called democrats have vilified an entire minority group, employed apartheid-like segregationist measures, and forged reactionary ties with their traditional enemy, the Burmese military. This includes a number of prominent members of Myanmar’s pro-democracy opposition who have begun calling for collaboration between civilians and the military (the very same who spent decades persecuting the political opposition, forcing tens of thousands into prison or exile), in a bid to drive out what they claim are illegal Muslim immigrants who threaten the delicate fabric of Burmese society.

This has put Aung San Suu Kyi in a very awkward position, forcing her to choose between the morally unassailable but politically unpalatable high ground (since defending the Rohingya likely entails losing a large number of votes especially from the Arakan state’s Buddhist population), or a more populist stand that yields to widespread bigotry. Her own party, the National League for Democracy, viewed by the outside world as the driving force for change in Myanmar, itself tiptoes around the subject. One party official told the BBC earlier this year that “even in our organisation, the Rohingya question has not been settled”.

Recently, a foreign journalist asked the Nobel Laureate whether she regarded Rohingyas as citizens of Myanmar. “I do not know,” she prevaricated. “We have to be very clear about what the laws of citizenship are and who are entitled to them”, she replied, thereby choosing to avoid amplifying the situation and speaking vaguely of a need to reform Myanmar’s citizenship law as a way of resolving the conflict.

Ground Realities of Moving Forward
So where does this leave us in the wake of international excitement about the election of Aung San Suu Kyi and Myanmar’s march towards becoming an open democracy? The incidents with the Rohingya show an apparent breakdown in the moral logic of Myanmar’s internationally vaunted opposition force. However, much of the fault also lies on our end rather than solely with them. Have our own perceptions of the pro-democracy movement been slightly over-romanticized, in terms of representing their battles against the junta as some sort of pure quest of good vs. evil? Did we mistake their opposition to the junta to be an acceptance of universal human rights and a commitment to tolerance?

“Once the Burmese opposition no longer was confined to simply opposing (saying the right things), and actually had to suggest policies, what occurred was a sort of ‘return of the real,” Elliott Prasse-Freeman, of Harvard’s Carr Center for Human Rights, wrote in an email. “It became clear that ‘Human Rights’ were just demands against power, and they didn’t mean anything in terms of the kind of politics the opposition actually stood for.”

Or perhaps it is a case for the fact that Myanmar is no democracy and Aung Suu Kyi was perfectly justified in saying that we cannot resolve this problem unless there is democratic government and citizenship rights are decided according to the Constitution.

Regardless though, these have been eye opening times for all. Myanmar’s opposition movement, which won international admiration for its efforts (with many dying or being put in prison for long terms), risks unravelling the delicate transition to democracy, by its hypocrisy regarding the unfolding crisis.

As Myanmar stands ready to open its doors to the outside world, the longstanding fear of outsiders, an effect of decades of isolation – will need to be conquered, especially as the population interacts with far more non-Myanmarese and non-Buddhist communities.

The immediate task before the international community is to stop the violence from taking place and then to push for humanitarian access and rendering of relief. The international community should push both the governments of Myanmar and Bangladesh to allow NGOs and other voluntary agencies to provide humanitarian relief. Eventually, those responsible for the atrocities against the Rohingya should be brought to justice.

There is another important role for the international community to play. Such discriminatory policies against its citizens are a major shadow on Myanmar’s revamped international image, but are largely obscured by the taboo that surrounds their exposure. Observers are loath to broach the subject, given the ramifications that accompany accusations of racism. If Myanmar is to truly join the global community, the floor must be opened to debate. There must be acknowledgement that a malaise exists in Myanmar, which has felt the pain of antipathy and isolation for decades. Taking a sensitive but head-on approach to addressing the problem would be the first step. Britain and America must be part of this international approach as they embrace Myanmar. They must not only welcome Myanmar to the international stage, but also teach about it about universal democratic principles and human rights.

The demand of the Rohingyas to be treated as human beings and given their basic human rights is something that should not stain the conscience of the international community.

History has taught us that if swift action is not taken to stop these senseless acts of violence, then they perpetuate into bigger problems. However, George Bernard Shaw also said: “What experience and history teach is this: that people and governments never have learnt anything from history or acted in principles deduced from it.” This is perhaps the sad irony of “Never Again”.