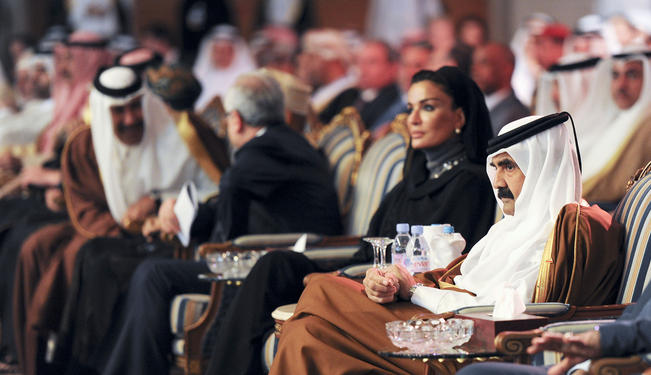 The Arab Uprisings have fundamentally altered the balance of power in the region. Traditionally, the main powers in the Middle East have been Saudi Arabia, Egypt, and Iran. Now, there are new actors vying for a greater role in the region. Qatar is looking to play a greater diplomatic role in the Middle East and beyond, while Turkey has been touted as a role model for Arab countries embarking on the long road of democratic reforms. Because of the resurgence of sectarianism, Shi’a Iran still remains a key power in the region.

Qatar is a small nation in the Arabian Peninsula with the third-largest natural gas reserves in the world and a superb infrastructure. It is the richest country in the world in terms of per capita income, thanks to its low population and a GDP swelled by an abundance of natural resources. Qatar’s wealth has ensured that there have been no uprisings in the country despite the fact that it continues to be an absolute monarchy, albeit one that supports democratic reform abroad.

Qatar has played a key diplomatic role in various uprisings, particularly in the Libyan and Syrian civil wars. It has sought to reinvent itself as the key diplomatic player by outdoing its neighbor, Saudi Arabia.

As The Guardian observes:

“Qatar has attempted to position itself at the forefront of the transformation of the region, giving military support to the opposition to Colonel Muammar Qaddafi in Libya as well as backing key players in the country’s fractured post-revolutionary politics through tactics – some diplomats have alleged – that have included weapons shipments. More recently, it has been accused of funneling arms to Syria’s opposition groups – a claim the prime minister denies, despite the fact that Qatar vocally supports the arming of that country’s opposition.”

Indeed, Qatar’s support of pro-democracy movements in the Arab world while remaining an absolute monarchy itself, has led to questions about its motives. With a population of less than 2 million, most of who are not native Qatari citizens, the country has sought to establish closer allies in the region and beyond. Sheikh Hamad bin Khalifa Al-Thani recently visited the Gaza Strip. It was the first visit to Gaza by a head of state since Hamas came to power. Significantly, the Emir pledged $400 million for construction projects in the Palestinian territory. Jane Kinninmont of Chatham House observes:“There is a feeling that it needs a lot of allies. So Qatar pursues alliances both with larger countries and smaller ones that it can rely on in places like the UN General Assembly.”

Qatar’s allies in the region are largely the Sunni Arab countries. Significantly, the country has allowed the Taliban to open an office on its soil, courted Israel, maintained contact with Hamas, remained a key US ally, called for direct dialogue between the US and Iran, and maintained economic relations with Tehran.

“Sheikh Al-Thani understood the [uprisings] as an opportunity to compete for regional supremacy. Turkey, Iran, and Qatar are now jockeying for power. The Emir [of Qatar] is doing everything he can to support the freedom aspirations of the Arab Street. However, this does not make him a democrat, but instead a pragmatic politician who understands the importance of being on the right side of history… the Emir has turned his tiny and politically insignificant Emirate into a diplomatic titan.”

Alongside Saudi Arabia, Qatar is at the forefront of a regional power battle between Sunni and Shi’a nations, with the two GCC countries and Iran vying to be the region’s biggest player. The diplomatic rise of Qatar is shifting the regional balance of power, especially given that it controls the discourse in the region through its ownership of Al Jazeera, the media organization credited with playing a crucial role in the uprisings.

Read the third excerpt from The Arab Uprisings: An Introduction on January 21, 2013.