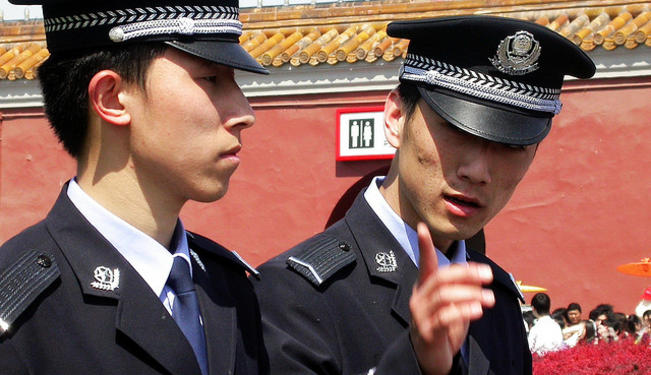 Over the past four years, social media platforms such as Twitter and Facebook have played significant roles in stoking political events. The United States presidential elections, the Occupy movement and the Arab Spring each demonstrate the extent to which social media can facilitate popular political discourse. More interestingly, these events also show how social media enables dialogue across power hierarchies. Candidates, leaders, voters and demonstrators are able to convey their goals and opinions to one another through a composite of shared hyperlinks, re-tweeted opinions, and highly circulated event invitations; in doing so, they make political discourse more accessible to a general public.

In China, the so-called “Great Firewall” censors access to Facebook, Twitter, and many other websites that could contain material that is overtly violent, political, or critical of the government. Yet there are breaches in each of these censored categories—it would be impossible for China to block all portals and still maintain the semblance of a modern society—and many Facebook-withdrawn foreigners use virtual proxy networks (VPNs) to circumvent the censors. The pretense of government control over free speech is generally accepted; in practice, it is spotty and easily flouted.

Most Chinese do not use VPNs. Some fear legal repercussions (VPNs are not technically permitted), but many simply do not find them necessary. Weibo, Renren, and Tudou, the Chinese versions of Twitter, Facebook, and YouTube, sufficiently meet the communication and entertainment needs of China’s Internet users. These sites are obviously Sino-centric, but the scope of material available through them (including a range of Western films, television series, and music) is so vast, that it is difficult to call them, conclusively, “limiting.” Indeed, it may be worthwhile to consider the lack of Facebook, Twitter, and YouTube as less a political concern and more a cultural entreaty. Just as the party refuses to submit to Western government systems in favor of its own path towards democracy, it constrains Western media platforms in order to encourage Chinese ones.

These social media platforms—particularly Weibo—have become outlets for public discussion about politics and party officials. For example, in the past year, journalists covering the Bo Xilai scandal used updates from micro-blogging sites such as Weibo as starting points for their research. More recently, President Hu Jintao’s speech on political reform at the 18th Party Congress spurred a series of critical Weibo-tweets that lamented and lambasted his vague rhetoric. Despite a slew of attempts to curb the discourse, micro-bloggers are largely undeterred from expressing their opinions. Although especially controversial tweets may be deleted, they are still, for some time, published and available for public consumption. Accordingly, while the censors may periodically stymy the dissemination of information, they do not stop the cultivation of public opinion.

The burgeoning use of social media in China thus gives way to an interesting dynamic between opaque party politics and an increasingly expressive populace. How does China handle the democratization of political discourse while preserving its decidedly undemocratic politics? As Beijing dealed with its once-per-decade leadership transition, Western pundits and commentators are questioning the long-term tenability of China’s one-party government system. The West wants to believe that China is on its way to a more transparent governing system, one that at least pretends to be electorally driven. Indeed, tiny changes prick the horizon: the successful protests against the expansion of a chemical plant in Ningbo, the small-scale local elections, and the party’s self-confessed corruption, all point to a more vocal, discerning public.

Yet despite these democratic trends, it is difficult to shake the fact that the party obliquely sanctions these incidents and admissions. If the party cannot control something, then it must accept it into the party fold. Through acceptance, it regains control. Micro-blogs are a perfect example of this dynamic. As wry Beijingers make witty, 140 character comments on the absurdity of various leadership-transition policies (no knife sales, no rolling down windows in taxis) and individuals in the provinces slyly grumble about delegates, party members are tuning into this politically-minded discursive environment, and even appropriating it for their own ends. Indeed, China’s official news sources tacitly condone the micro-blogosphere, apparently informed by the adage, “If you can’t beat them, join them.” While this hints at the potential for an increased dialogue between officials and the public, it also suggests that there is little the party won’t do to ensure its longevity.

The relationship between social media and the leadership transition could feasibly, at some point, give way to a legitimate change in leadership. The Arab Spring showed how, under the right circumstances, social media could be used to mobilize people into action. Furthermore, the different ways around China’s censors and firewalls call into question their efficacy in containing widespread viral activity. It might be worth noting that the Chinese have a long-established historical precedent of overthrowing unpopular regimes.

However, as things currently stand, China’s well-educated, urban middle class youth—the same group that sparked so much political dynamism via social media platforms in other parts of the world—is not agitating for democratic political processes, translucency, or a change in leadership. They do not need to. Standards of living have improved dramatically over the past twenty years, particularly in urban areas. The shift from an export-driven economy to a consumer-driven economy (touted as crucial to China’s sustained economic health) is already apparent in places like Beijing and Shanghai. The average person’s consumption, communication, and entertainment needs are met by a multitude of platforms. It may be that for most in China, the status quo is enough. This political transition is only a transition because it does not need to be anything more.

It is worth noting that if and when political changes do occur, they will be on Chinese terms. And it is unlikely that these political changes will take the form of a Western government structure. A crucial question therefore arises: if, in the future, China says it has achieved democracy—if “democracy” is a measurable, declarable state, like “modernity”—what might that look like? Will it be recognizable to the West? Or will it build on the semantics of “elected officials” and “voters” to create a top-down election process (much like the one that presumably occurs within the party now), with voting privileges extended to every Chinese, to ultimately perpetuate the party’s life? Perhaps democracy is to the party what Twitter is to Weibo: a template that, once built on, will eventually become irrelevant.

*[Editor’s Note: The author requested for their name to be removed, which has been replaced with a pseudonym. Updated: August 27, 2020.]