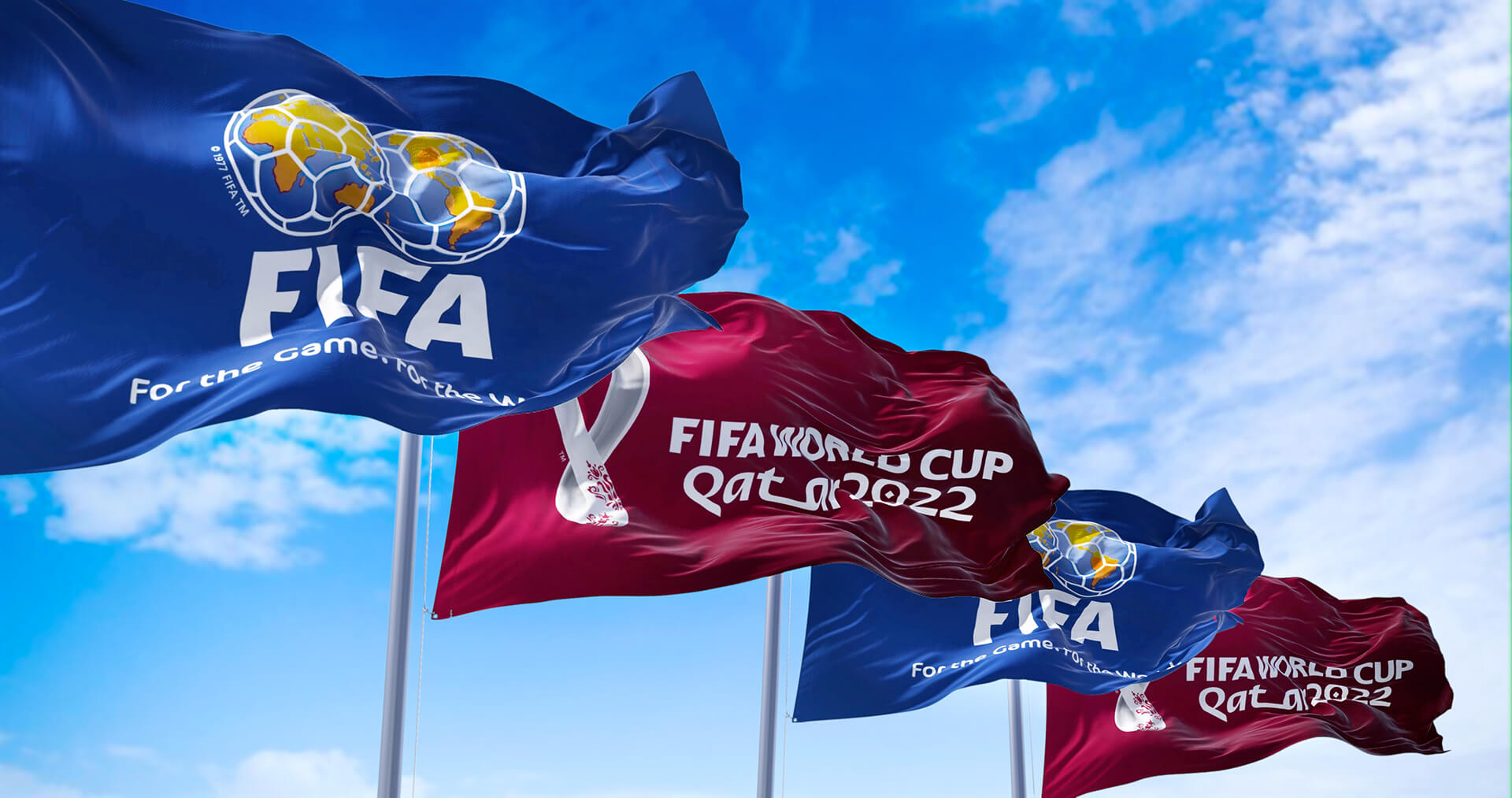 Doha, Qatar, January 2022: Flags with FIFA and Qatar 2022 World Cup logo waving in the wind. The event is scheduled in Qatar from 21 November to 18 December 2022 © rarrarorro / shutterstock.com

Since the start of  the 20th century, sports have played a significant role in developing the nation state. Lending a hand through both public diplomacy and soft power, sports have often fostered national identity. Through the “us versus them” mindset, sports provide the perfect opportunity to display visible and powerful symbols of nationalism.

The original intentions  of ​​Pierre de Coubertin, the founder of the modern Olympics, were to promote internationalism and humanity. However, sports have continuously been used as a platform to promote nationalism. For instance, who can forget how the USSR and USA turned the 1980s Olympics into a Cold War battleground? If war is an extension of politics, then organized sports can be seen as a substitute for war and a bloodless theater for national competition.

This year, the FIFA World Cup has announced Qatar’s arrival on the international stage. It has become the first Arab and Muslim country to organize an event of such magnitude, This has added to its prestige and soft power globally and, especially, in the Islamic world.

The 2022 World Cup in Qatar comes after the 2018 World Cup held in Russia. Though both host nations are light years away from democracy, this did not matter for FIFA. Almost immediately after the nomination of the organizers, there were multiple allegations of corruption. There was suspicion that the Qatari government bribed FIFA so their country could be hosts.

The Greatest Show on Earth

According to The Guardian, 16 of the 22 voting members of the FIFA Executive Committee that chose Russia and Qatar are now under investigation for some form of corruption or wrongdoing. Allegations emerged that FIFA benefited from a $400 million TV rights deal with Al Jazeera, Qatar’s state broadcaster. Apparently, this deal came just 21 days before the decision to award the World Cup to Qatar.

In recent years, particularly under French president Nicolas Sarkozy’s, ties between France and Qatar grew closer. In November 2010, Sarkozy, Michel Platini, the former head of the European football association (UEFA), and Sheikh Tamim bin Hamad Al Thani, the Emir of Qatar, had a now infamous meeting. This led to Platini changing his mind and voting in favor of Qatar hosting the World Cup. FIFA’s president at the time Sepp Blatter has since admitted this was a mistake. FIFA should not have awarded Qatar the World Cup.

The Qatari government would later buy Paris Saint-Germain, France’s most famous football team. Flush with money, the club has bought players like Kylian Mbappe, Neymar and Lionel Messi. The Qatari government has also increased its stake in a French media group, and bought the television rights for Ligue 1, France’s top league. France has also developed closer trade relations with Qatar.

The Franco-Qatari collaboration continues. According to Le Monde, the National Assembly ratified an agreement between Qatar and France. It turns out 220 French police officers will work with local officers in Qatar during the World Cup. The French Interior Ministry declared, “France’s ambition is not to deploy a large number of units, but to provide high-level expertise and specialized operational support.” It seems likely that France has profited from this arrangement.

After Qatar won the 2022 FIFA World Cup bid, the government began constructing the necessary infrastructure to host the tournament. Workers from poorer Asian countries often worked in unimaginable conditions. As far back as 2013, several European newspapers, including The Guardian, Norwegian magazine Josimar and Danish daily Ekstra Bladet repeatedly reported on abuses against migrant workers. They even uncovered cases of forced labor. In February 2021, The Guardian also reported that more than 6,500 workers from India, Pakistan, Nepal, Bangladesh, and Sri Lanka had died in the last 11 years. Many of them had died on World Cup construction sites.

All these revelations have cast a dark shadow over this tournament and FIFA. Tragically, Football’s apex body has embraced Qatar wholeheartedly and ignored all human rights violations.

In recent years global brands have focused their communications on socio-political causes. Advertisements are no longer just about the products, they are also about important brand values. When it came down to the World Cup, many companies faced a difficult choice: do they associate with Qatar?

According to The New York Times, several companies have already announced they are boycotting the event. The ING Group, a major financial and banking services group that sponsors the teams of the Netherlands and Belgium, has decided it will neither accept any tickets nor be involved in any related promotion of the World Cup. Another company that is a baggage service provider, GLS, sponsors the Belgium team. It said, “we believe that a commercial use of the 2022 World Cup in the context of the human rights situation would be better not to take place.” The company is also not using ticket allocations for customer promotions and not engaging in any advertising campaigns in Qatar.

Brands like the national lottery Danske Spil and the bank Arbejdernes Landsbank, sponsors of the Danish Football Association, agreed to forgo their paid placement on the team’s training gear for human rights messages during the World Cup.

The companies involved with the Qatar World Cup are facing a backlash. Football fans have kicked off a visual campaign criticizing the brands participating in the event. Today, such action may seem relatively ineffective. In the long run, brands that have taken a strong stance against Qatar might have much to gain, especially if unpleasant events occur  during the tournament.

Nevertheless, at the end of this year, we will witness probably the most expensive sports event in history. Qatar’ would have spent about $220 billion on infrastructure and communication apart from bribes funded by its ample oil and gas reserves. The 6,500 who died will not be forgotten though and the FIFA Qatar World Cup will always remain tainted.