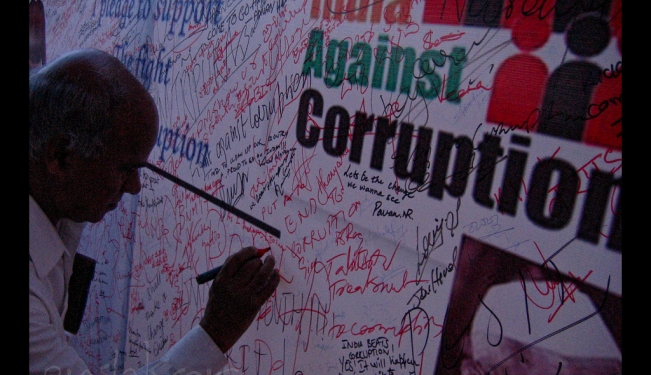 Corruption in India has been an age-old problem. Although one can trace references to it in the Arthashastra, the Indian classic purportedly written by Chanakya in the 3rd century BC, its modern-day manifestation owes itself more to the colonial nature of the Indian state and the rent-seeking nature of its politics.

Independence in 1947 did not lead to the overhaul of the Indian administrative apparatus. The 1935 Government of India Act is the basis of Indian administration and many laws like the Indian Penal Code, The Police Act, and the Indian Evidence Act were drafted in 1860, 1861, and 1872 during the height of the Victorian era. Accountability of government servants is not built into Indian institutions.

The Right to Information Act in 2005 was much heralded as the change that would bring more accountability to the state officials. The corruption, however, has only increased since.

Politics in India is hideously expensive. There are 543 elected members of the Lok Sabha, the lower house of the Indian Parliament. Campaigning in this country of over 1.2bn people with humongous electorates is an expensive proposition. This means that political dynasties with many generations of accumulated wealth have a natural advantage in winning elections.

Post-independence, the colonial edifice of the Indian state acquired socialist excrescences. This has meant that the role of the state, despite the liberalization of the 1990s, is much too large in society. Those who wield political power can reward their cronies with wealth-generating opportunities. They can also extract rent for the cost of doing business. It is widely known that the Tatas were not able to enter the aviation market in the 1990s because they were unwilling to bribe the then aviation minister. A few families in India wield disproportionate power in many industries and the media while free is controlled by big business houses operating it for influence or profit maximization.

Economic liberalization in India has been accompanied by the collapse of institutions. As a distinguished retired army general has said, “the administration siphons off development money, the police extorts protection money, and the judiciary has also got into the act.” Nearly 30mn cases are pending in courts. Over 3mn cases are pending in India's 21 high courts, and an astounding 26.3mn cases are pending in subordinate courts across the country. This means that there is no de facto rule of law.

The collapse of the legal system has led to the rise of criminal syndicates that are now filling the vacuum left behind by the state. These syndicates offer protection and settle disputes instead of the police or the judiciary. Some go on to become political leaders. As some members of the international press have noted, nearly one-third of Indian members of parliament had criminal charges against them. Celebrity politicians are increasing with Bollywood actors, cricket players, and members of big business entering Parliament. With the tight dynastic control in most parties, particularly the Congress, Parliament has become an institution where theatrics have replaced serious debate, as in the case of parliamentary discussions on foreign investment or nuclear policy.

So far, economic growth as proceeded with pace in spite of institutional collapse because Indians save, work hard, respect education and have plenty of entrepreneurial chutzpah. However, the lack of infrastructure, rampant corruption and institutional uncertainty are formidable bottlenecks going forward and are leading to widespread concern.

The North – South Trench in Rio+20