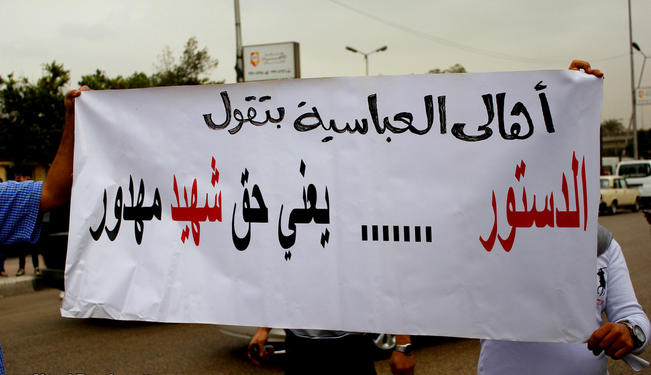 The widespread protests triggered by Morsi’s recent decisions are symptomatic of profound distrust that characterizes the relationship between different segments of Egyptian society.

On November 22 2012, Mohammed Morsi issued a constitutional declaration that he described as “revolutionary”, granting the constitutional assembly additional time to complete the drafting job, prohibiting the dissolution of the one remaining branch of parliament, and granting his own immunity from judicial scrutiny.

Minutes later, protesters stormed into Tahrir Square and other public places in Egypt, and several of the Muslim Brotherhood’s headquarters were attacked. Major courts suspended their work in protest. Facing the possibility of judicial revocation of his declaration, Morsi pushed the constitutional assembly to rush the drafting process, and submit the draft constitution for a referendum. The measure has resulted in more unrest, culminating in the besieging of the presidential palace by angry protesters.

What exactly do those protesters want? Was this not the exact process that was approved by popular referendum on March 19, 2012? Is Morsi not the legitimate president of Egypt who won fair and square in popular elections? Are those protesters simply sore losers who are trying to jeopardize the transition to democracy because of their failure in organized politics?

These are all fair questions that may cross the mind of a cool-headed observer. The only problem with these questions is that they are wrong in the first place. When protesters camped in Tahrir Square in the winter of 2011, Hosni Mubarak’s aides and the media asked: ‘what do they want? Who are their leaders? Why can’t they wait till the end of the president’s term as promised?’ These questions were wrong then, and they are still wrong now.

When we as Egyptian revolutionaries took to the streets on January 25, 2011, we did not have a unified goal, but we had a unifying justification: everyone in those protests felt humiliated. It did not matter if the specific causes of humiliation were different, and it did not matter that there was not an elaborate list of demands that would make all the problems go away.

The same is true today, except those protesters are more afraid than humiliated. They are not ready to trust a single group with the fate and future of the Egyptian state. The Muslim Brotherhood had known all along that there is a significant segment of Egyptian society that distrusts it, but has chosen to hide behind its electoral domination to avoid doing what is politically right.

Since the referendum in March, which determined the steps leading to the drafting of a new constitution and election of democratic institutions, the Brotherhood’s stance was that the legitimacy of protest had ended, and was instead superseded by electoral legitimacy. Things may have been so simple in a society that enjoys a sufficient level of harmony, mutual trust, and confidence among its constituent elements. However, that is not the case in Egypt.

The constitutional amendments approved by the referendum meant that an elected parliament would form a constitutional assembly. Nothing therein stated that the winner of the parliamentary majority would have the right to unilaterally determine the shape and fate of the Egyptian state and society. However, this is what the Muslim Brotherhood-Salafi alliance has attempted to do every step of the way. Even if the draft constitution is not as disastrous as many overly-dramatic secularist leaders make it sound, it has still been an extremely exclusionary process that gravely exacerbates the profound fears and distrust latent in significant segments of Egyptian society.

No democracy can be built merely by following a list of procedural steps laid out in a constitutional provision, if underneath such procedures the fumes of civil wrath and panic continue to rise. The Muslim Brotherhood has no right to say: ‘we have won the elections, we determine your fate, live with it.’ A democracy is a system in which a minority accepts its role as a minority because it has previously consented to the entire system of governance, and has been granted sufficient guarantees against the possible abuse of power by the majority. In Egypt, the majority unilaterally shapes the system, sets the limits of the guarantees, and tells the minority to stay quiet, because this is democracy.

The way out of this has always been straightforward: a true, honest and responsible negotiation between the leaders of each major faction that ends in an agreement over the dynamics and guarantees of the future Egyptian state which are sufficient to appease the fears of the minority. Some may argue that perfect representativeness is impossible. That is true. But sufficient representativeness to contain the grave unrest that is about to throw Egypt into a political and economic abyss is possible, and is the only responsible course of action.