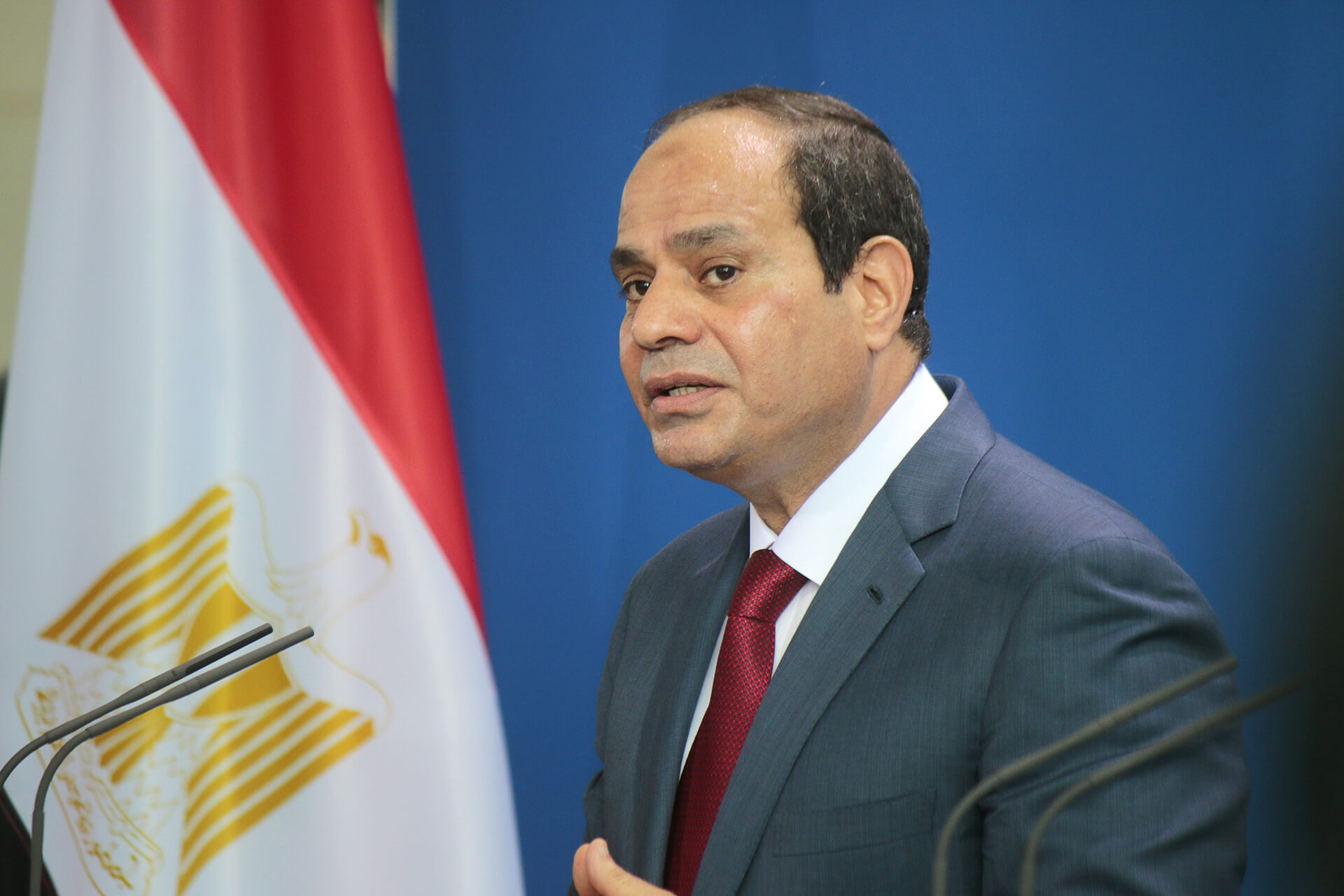 BERLIN, GERMANY – JUNE 3, 2015: Egyptian president Abdel Fattah el-Sisi at a press conference after a meeting with the German Chancellor in the Chanclery in Berlin. © 360b / shutterstock.com

In the context of the Arab Spring, where popular uprisings brought down various regimes in the Middle East, the fall of the Egyptian President Hosni Mubarak was the most spectacular in the region.

Muhammad Mursi, from the Muslim Brotherhood party, was elected as the first civilian president of Egypt in June 2012. Yet his short year in office did not bring about a radical shift in Egypt’s foreign policy, due to the effort to avoid provoking counterproductive reactions under the new government. Despite this, certain nuances Mursi introduced revealed a moderate commitment to reshaping some features of Egyptian foreign policy. In contrast to the close ties between Hosni Mubarak’s regime and Saudi Arabia, Qatar and Turkey became preferred allies, as they supported the revolution and the subsequent political transition, with Doha providing $8 billion in economic aid.

On the one hand, the new post-revolutionary government was keen to show its willingness to play a responsible role in international affairs, maintaining the peace agreements with Israel, and thus securing its annual $1.5 billion in aid from Washington. In addition to this, Mursi was the first Egyptian president to travel to Tehran after 33 years, to participate in the 16th Non-Aligned Summit in August 2012, signaling a moderate attempt to balance the relationship with Iran. On the other hand, one of his first steps was to open Egypt’s border with Gaza to bring relief to its inhabitants, showing the usefulness of his good communication with Hamas in Gaza, in stark contrast with  the Mubarak regime. It helped the US achieve a ceasefire between Hamas and Israel in November 2012.

Al-Sisi’s arrival and the reconfiguration of Egyptian foreign policy

The reforms undertaken by the new government, coupled with various internal disputes concerning the new constitution put forward by the Muslim Brotherhood, led to a coup led by General Abdel Fattah al-Sisi. Under the new regime headed by al-Sisi, the link with Saudi Arabia was not only re-established but was intended to create a huge political and economic dependency.

The kingdom of Saudi Arabia, along with the UAE and Kuwait, provided Cairo with $12 billion in economic aid, rising to $42 billion in the following years. Among the reasons why these Petro monarchies were interested in supporting the new al-Sisi government, it is relevant to mention the fact that they shared a common interest in putting an end to Arab Spring governments in the region and opposing the Muslim Brotherhood, declared to be a terrorist movement. In payment for their support, Riyadh demanded unwavering subservience to Saudi leadership and its regional objectives.

Egypt under al-Sisi has shown its allegiance to Saudi Arabia by joining the boycott of Qatar initiated in June 2017, as well as by transferring sovereignty over the islands of Tiran and Sanafir to Saudi Arabia. Likewise, concerning Libya, which has been without a stable unified government since the fall of Gaddafi in 2011, Egypt is one of the main supporters of General Khalifa Haftar, who has installed a self-proclaimed government in Tobruk against the government in Tripoli, which is supported by Qatar and includes the Libyan Muslim Brotherhood. For Cairo, along with the UAE, the elimination of the Muslim Brotherhood is a priority governing both its domestic and foreign policy.

The heavy dependence of Egypt’s  current foreign policy on Arab financial help constrains the nation’s leadership in the region. Besides, there is a need to maintain unwavering US support for Egypt, which remains strongly dependent on his alliance and cooperation with the two main allies of the US in the Middle East: Israel and Saudi Arabia. This is also coupled with the cooperation between Riyadh and Cairo on the Palestinian dossier, of great value to Israel, as well as the common interest in curbing Iran’s growing influence in Sudan and Eritrea.

Nonetheless, the points of friction are multiplying. Egypt supported maintaining the  regime of Sudanese leader Omar al-Bashir, who was subjected to an intense wave of protests calling for his ouster in December 2018, whereas Saudi Arabia and the UAE backed the idea of resolving the crisis by seeking a reliable successor to al-Bashir, such as Sudanese intelligence chief Salah Gosh. That solution would allow Riyadh to continue to peacefully deploy its influence in the Horn of Africa.In conclusion, Egypt’s dilemma in its vacillating foreign policy lies in its aspiration for leadership and its limited capacity to develop it. Egypt has lost its historical potential for leadership, but it has also lost the capacity to come up with the kind of  initiative that could restore it. This is a source of  frustration widely felt in a nation with a strong nationalist sentiment. The current regime under Abdel Fattah al-Sisi, while trying to maintain an image of leadership in an instrumental sense, with a view to confirming its legitimacy, is too afflicted by its evident weakness and dependence to be able to decisively influence events in the Arabian region.