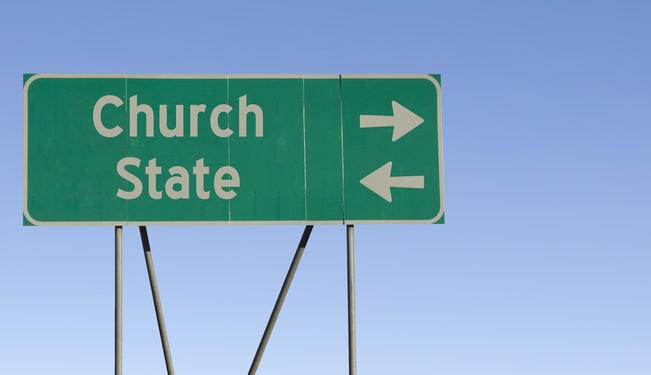 What is secularization and is it a reality in society?

Democracy and the Emancipation of the Political from the Religious Sphere

Today, the term “secularization” is commonly understood as the social decline of religion in favour of rational, enlightened, and scientific thinking or acting. Accordingly, Max Weber’s famous phrase “die Entzauberung der Welt” could be easily associated with the saeculum (meaning time or era) because in Ecclesiastical Latin this expression traditionally marks the distinction between the temporal and the eternal world or between the earthly and the divine.

In 19th century, the term “secularization” was basically used to indicate the transfer of church property into the control of the state. But gradually the concept grew into a general synonym for disenchantment: people’s detachment from religious bonds and convictions, the transformation of religious concepts into a historical context, and also for questioning the ecclesiastical authority and for de-christianization. Moreover, this development was connected with the political claim to separate church and state both institutionally and mentally.

In sum, the concept of “secularization” stands for a substantial emancipation of politics from religion. Hence the result of this brief outline might be that the processes of secularization and democratization share a couple of fundamental analogies. In democracy, the source of legitimate authority and sovereignty is the people and not God, which means laws are made and abolished by human beings. Proceeding from this assumption, we can identify a particular conflict between religion and democracy which the French theorist Alexis de Tocqueville had already drawn attention to. In his eyes, democracy undermines all spiritual authority and religion in particular, since the homme démocratique (who is proud of his intellectual independence and his autonomy and only follows his rational interests) requires arbitration for all relevant political questions. So the role of religion as intellectual authority is replaced by the regime of public opinion: what definitely counts is what all people think (and not the superior opinion of single persons, experts or priests). From this, the French Tocqueville interpreter Marcel Gauchet even drew the conclusion that democracy means nothing else but the “grave of religion”. While the necessarily dogmatic character of all religions tries to achieve absolute concordance, the open democracy represents exactly the contrary: a field of continuous, conflicting interests.

In turn, a reconciliation of democracy and religion seems only possible by dividing their spheres of influence: this is the thought of laicism. As stated in John Locke’s “Letter Concerning Toleration” (1689), religion would have to be seen as something private within the modern state. For democracy, this obviously means that all people can practice their religion the way they want as long as they show respect for the boundaries given by the rule of law and renounce on a divine (and therefore scarcely democratic) legitimization of public rights and political power. Against this background, the concurrence between secularization and democratization in western history was certainly not a coincidence. At the same time, current debates about the possible democratic capabilities of non-Christian societies and cultures often point out that a similar process of secularization and the abandonment of a public role of religion might be the essential condition for a successful transformation.

The Secular Democracy –a Myth Nevertheless?

Although the theoretical connection between democracy and secularization seems to be quite plausible at first glance, there are good reasons to doubt it. First of all, it is very uncertain that the process of democratic secularization correlates with empirical facts. The dominant role of religion in the United States in particular is obviously far from the secular phenomenon we have described above. Likewise, it could also be questioned to what extent examples like the UK, Germany or Italy can be categorized as “secular” at all. In this respect, the multiple entanglements between church and state in these countries might suggest the impression that secularization and the pretended secular character of democracy is nothing but a “myth”. The problem aggravates further because a public role of religion does not depend on an amalgamation of political and religious institutions. As a resource for moral values, social capital, and civic engagement or as an agent of public opinion, religion has a political impact beyond the separation of church and state. Last but not least, democratic laws always need corresponding pillars in the moral beliefs and convictions of individuals and civil society in order to support the constitutional system.

Such issues raise the suspicion that the term “secularization” might fail at grasping the complexity of religion and politics in modern democracy. In contrast, the comprehensive approach of Charles Taylor’s magnum opus “A Secular Age” (2007) shows an innovative attempt to conceptualize the parallelism of religious and secular ideas as main characteristic of enlightened societies. According to Taylor, secularization is not supposed to be an ultimate overcoming of religious thinking but in fact a process based on a fundamental rationalization of religious traditions offering people both options: a secular and a religious life script. Starting from this point of view – the contemporary synchrony between the sacred and the secular – we can see that perhaps secularization and de-secularization are not topics that could distinguish the western from the non-western world but rather a signature of all modern and democratic societies, which a range of researches of Ronald Inglehart and Pippa Norris have shown in the last decade.

In this regard, the Spanish sociologist José Casanova recently made a very provocative case: he argued that especially in Europe there is a proper phobia towards religion. The historic experience of religious wars in the early European modern era did lead to an exorbitant overestimation of secularization and the necessity of separated religious and political spheres in order to consolidate an open and democratic society. Thus, the popular attribution to religions of sharing an intolerant and fanatic character was absolutely unjust and would also neglect the responsibility of atheism for totalitarian ideologies in the 20th century. In addition to this diagnosis, Casanova demands a restoration of religion’s public role in European democracies and underlines the positive impact of churches and religious parties within the historical democratization of European nations.

Although Casanova’s arguments are certainly one-sided and tend to ignore the precarious risks of an (uncontrolled) overlapping between politics and religion, his work is an important contribution to the appropriate discourse concerning the constructive potential of religions in modern democratic cultures and societies. Proceeding from this, we might finally come to a paradoxical conclusion: actually, one of the essential claims of secular democracy could precisely consist of the premise of permitting religion a vast political field of activity as long as it follows certain conditions. In this respect, the “twin tolerations” Alfred Stepan pointed out, marking the boundaries in order to make religious systems politically compatible with democracy, are necessary but not sufficient.

The views expressed in this article are the author's own and do no necessarily reflect Fair Observer's editorial policy.