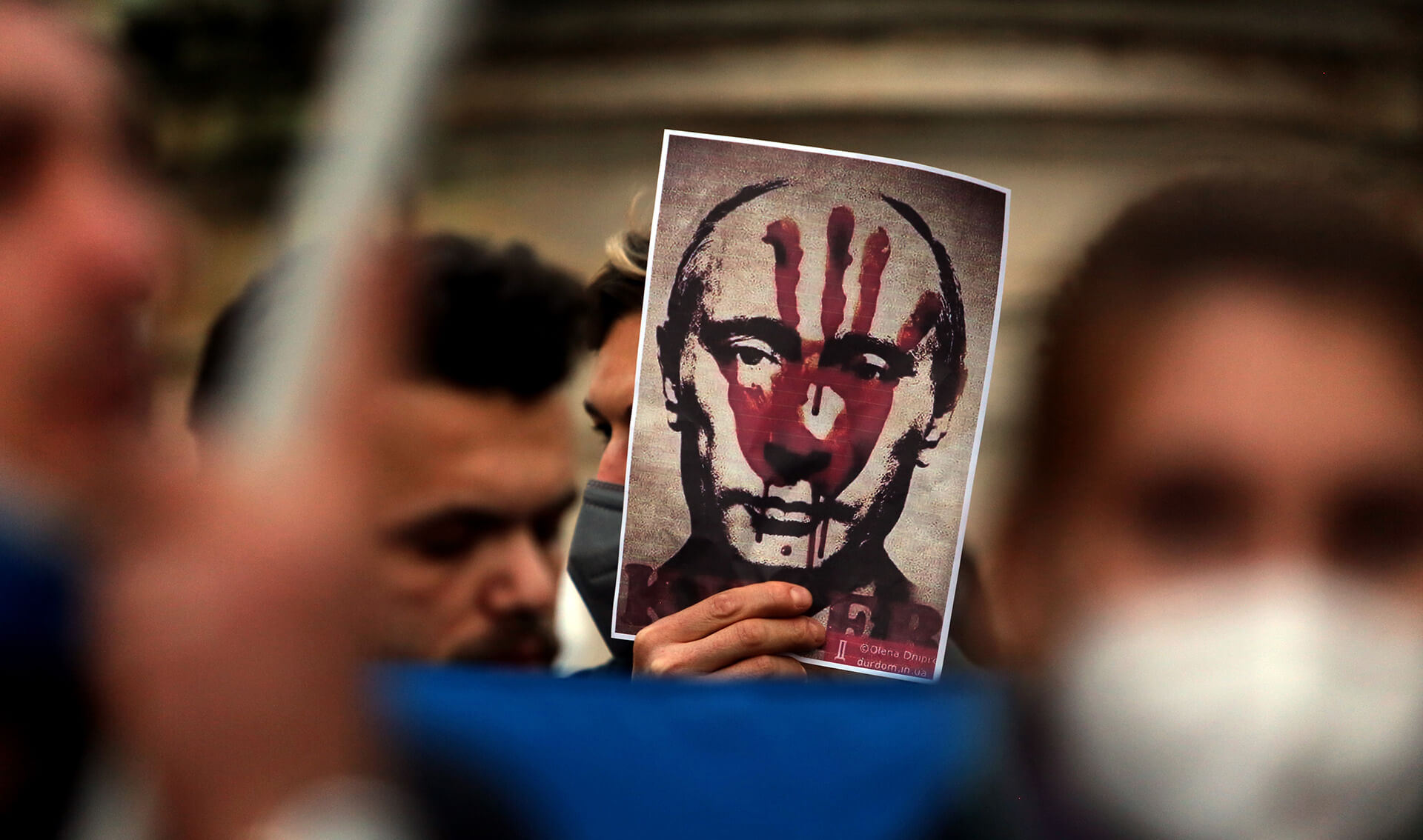 ROME, ITALY, 25.02.2022: Putin’s bloody face on a poster is shown during Ukrainian protesters with candles gather in Piazza del Campidoglio in Rome, against the war operations of Russia in Ukraine © Marco Iacobucci Epp/shutterstock.com

The United States was not the first major power to dream up the idea of destroying a country to “save” it. But in the Vietnam War, President Richard Nixon and his tiny brain trust of one — policy henchman Henry Kissinger — elevated this brutally cynical approach to the status of all-encompassing strategy. What began as the destruction of individual hamlets in Vietnam turned into a saturation bombing campaign of neighboring Laos and Cambodia that killed hundreds of thousands of civilians.

In the end, the United States didn’t “save” any of these countries. Vietnam unified under Communist rule as US soldiers withdrew in 1975, the Lao People’s Liberation Army took over Laos the same year, and the Khmer Rouge set about creating its own “killing fields” in Cambodia. Unlike the Korean War, where a stalemate prevailed, the United States decisively lost the Vietnam War.

Kissinger, however, won. All the blood on his hands did not prevent him from accepting a Nobel Peace Prize in 1973 for helping to negotiate a ceasefire in the very war that he’d prolonged and expanded. His reputation as a great statesman didn’t appear to suffer.

Nearly 50 years later, the “great statesman” is again talking about the necessity of a ceasefire in a brutal war, this one in Ukraine. Here, too, an imperialist aggressor is destroying another country in order to “save” it. It’s hard to imagine that Kissinger doesn’t see some parallels with the past, including his own role as “peacemaker.” At Davos last month, the near-centenarian recommended that peace negotiations begin within the next two months with the goal of restoring the status quo prior to Russia’s invasion. Otherwise, Kissinger warned, the battle risks turning into a war “not about the freedom of Ukraine, which has been undertaken with great cohesion by NATO, but…against Russia itself.”

Kissinger’s plea not to back Russia into a corner — or, worse, “into a permanent alliance with China” — has received some supporting echoes from other world leaders. Both Italy and Hungary have urged an immediate ceasefire in Ukraine. The Pope has praised Turkey’s efforts to find a diplomatic settlement to the war.

Who doesn’t want a ceasefire in the current war? Ukrainians are dying. Russian soldiers are dying. Millions of people around the world who are dependent on Ukrainian grain face starvation. Cut off from Russian gas, countries are turning to coal to produce electricity. From food to fuel, the war in Ukraine is a huge step backward for humanity and the planet.

But not quite everyone wants a ceasefire. Russia has not yet achieved its goal: the conquest of the entire Donbas plus the land that connects it to the Crimean Peninsula. The Russian military is bombing towns into submission in a last-ditch effort to declare victory over smoking ruins.

If this were the extent of Vladimir Putin’s ambitions, perhaps a ceasefire might work. A deal that locked in Russian gains to date would be an ugly capitulation to realpolitik, a trade of land for peace. As I wrote back in 2015, Ukraine could make the same gamble as Aaron Ralston did when a boulder pinned his arm in the Utah wilderness and he had no choice but to cut it off with a utility knife. Sometimes you have to resort to extreme measures to survive. Goodbye, Donbas. Farewell, Crimea.

Today, however, this analogy no longer applies. Russia doesn’t just want one piece of Ukraine. The Russian military continues to direct artillery barrages at the city of Kharkiv. Fighting around the southern city of Kherson, the only major Russian conquest so far in the war, continues, as the occupying forces try to consolidate administrative control of the region in advance of incorporating it into the Russian Federation. Nor can further Russian advances westward — for instance, toward the port of Odessa — be ruled out.

So, Russia does not accept any compromise based on a return to the status quo ante. And Ukraine doesn’t want to draw new borders to legitimate Russia’s ongoing land grab. It’s not even eager to formally cede to Russia what it controlled prior to the invasion, namely the Crimean Peninsula and approximately 30 percent of the Donbas.

So, peace and diplomacy and negotiations all sound like fine things right now. But there’s a big difference between just a ceasefire and a just ceasefire. Peace at any cost is not true peace.

It called for a ceasefire accompanied by a UN-supervised demilitarization of the front line. Negotiations would then follow on the status of Ukraine with a path toward EU membership but with accession to NATO off the table. Italy then offered a compromise on the disputed territories (Donbas and Crimea) with those areas enjoying full autonomy even as their sovereignty belonged to Ukraine. Finally, negotiations would lead to “a multilateral agreement on peace and security in Europe covering disarmament and arms control, conflict prevention, and confidence-building measures.”

The first challenge would be the demilitarization of the “front line.” Where would this front line be drawn? The very first step of the Italian plan would prove perhaps the most difficult because both sides are fighting to fix this front line at very different places. Ukrainian forces managed to push the Russian army away from Kyiv and Kharkiv, and the Ukrainian government is importing as many weapons as it can to inflict a decisive defeat upon the invaders. While its forces are bombing their way toward possessing all of the Donbas, Russia doesn’t seem interested at all in negotiating the kind of withdrawal the United States effected in Afghanistan last summer. Indeed, Russian Foreign Minister Sergei Lavrov called the Italian initiative “not serious.”

The second stage would seem a reasonable compromise. Ukraine gets to advance toward the European Union; Russia gets a guarantee that its neighbor won’t join NATO. But this presupposes that Moscow is still fixated on NATO membership. Since the earlier negotiations around neutrality in the first month of the war, Sweden and Finland have formally asked to join the security alliance. And Russia has increasingly stressed that it is fighting not a security alliance per se but the West as a whole. The EU’s additional oil embargo, passed this week, only deepens the divide between the Kremlin and Europe more generally. So, Russia might look at EU membership for Ukraine as equally non-negotiable (closer relations with Europe were, after all, the proximate reason for the Euromaidan protests in 2013-14).

The third stage is perhaps the most controversial. The Donbas would have full autonomy, including over its security policy, and yet somehow remain part of Ukraine. How would that work, exactly? The word “sovereignty” would have to be stretched so thin as to be meaningless.

And who could disagree with the fourth stage? Europe desperately needs a new, comprehensive agreement on security. But that just doesn’t seem feasible with the current leadership in Moscow.

The Saudi war in Yemen is an expression not of overall Saudi foreign policy in the region but the narrower ambitions of Crown Prince Mohamed bin Salman. The young leader, pushing through a modernization of Saudi society, saw a war against the Houthis as a perfect opportunity to consolidate his own power within the Saudi elite and advance his country’s regional hegemony vis a vis Iran.

The Turkish cross-border interventions in Syria, which began in 2019, have likewise been the brainchild of a single leader, Recep Tayyip Erdoğan, who has been obsessed with suppressing all versions of Kurdish resistance, both within his country and along the borders. At home, Kurds have challenged his authoritarian grip over Turkey. Going after Kurdish movements in Syria, meanwhile, is part of Erdoğan’s bid for regional dominance, a version of neo-Ottomanism that he has resurrected over the last few years.

The US invasion of Iraq had little to do with traditional US foreign policy. It was a power play by neoconservatives who thought that they could spread democracy throughout the Middle East as one autocrat after another fell, first to US military forces and then to popular uprisings. The war was the ultimate expression of a Bushist foreign policy: a weak president manipulated by his more hawkish advisors.

Russia’s invasion of Ukraine fits into this pattern as well. It is not some working out of primordial Russian urges to dominate its neighbors. The 2022 invasion, as well as the 2014 war, is all about Vladimir Putin. It is an expression of his worldview that Russia, Belarus, and Ukraine are part of a larger homogenous Russian world that encompasses communities of Russian speakers in other parts of the Russian “near abroad.”

In all these cases, regime change has not been an option. Rather, ending the wars requires the defeat of the prevailing ideology. Neoconservatism, as a robust US foreign policy, effectively died in Iraq. A similar defeat for Putinism will be necessary before any real progress can be made in Ukraine. That doesn’t mean the removal of Putin from office (though ultimately Russia will not advance until that happens). It means that Ukrainian resistance must stop Putinism from creating this imaginary Russian imperium.