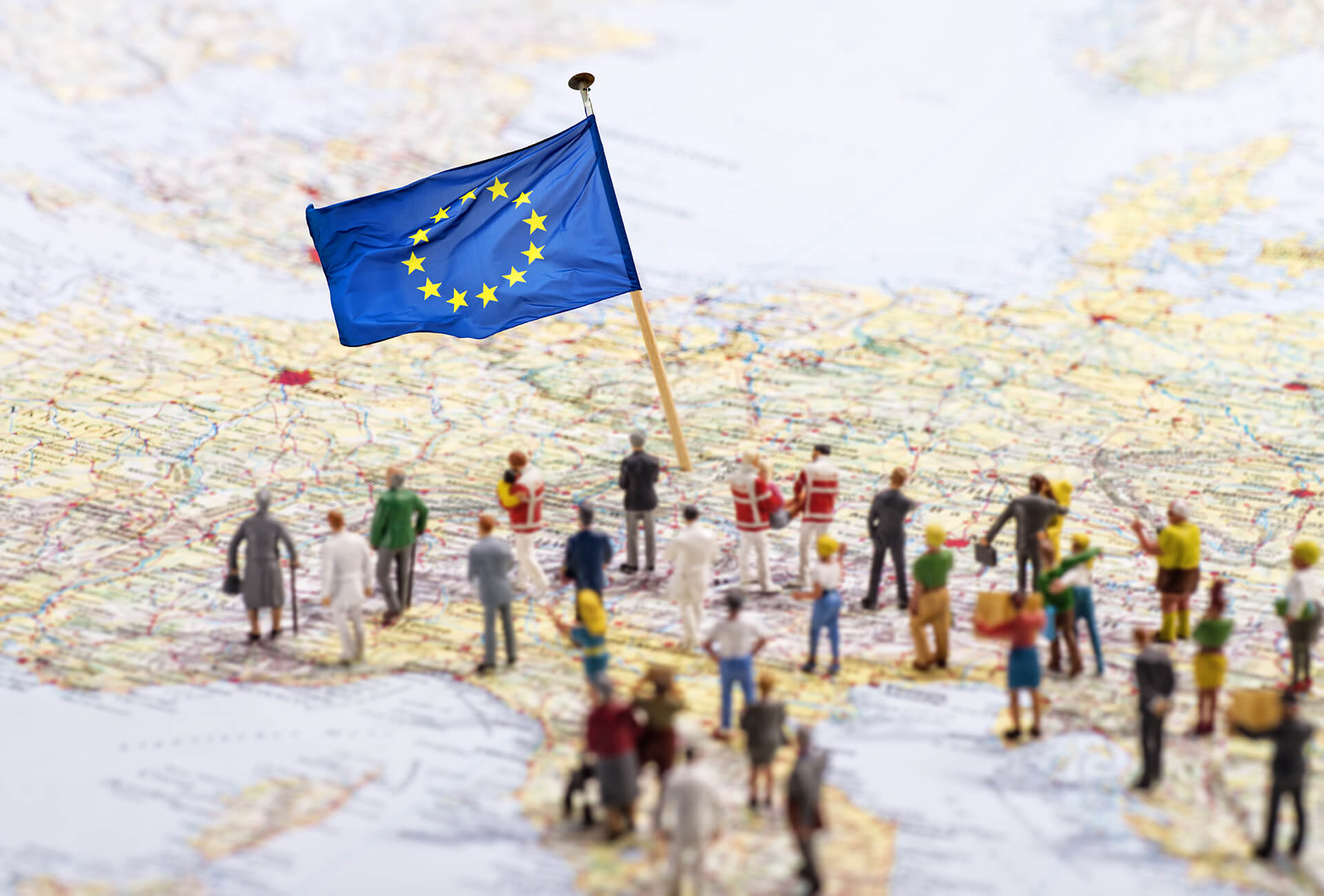 Europe map with European flag and a large group of figures. © gopixa / shutterstock.com

In the weeks following the Russian invasion of Ukraine on February 24, pundits began claiming that, if the campaign lasted more than a few weeks it would constitute a fatal humiliation for Russia’s President Vladimir Putin. Nearly four months later, with no end in sight, most commentators have relabeled the operation a war while acknowledging that whatever humiliation Putin may have suffered, it wasn’t quite fatal.

Everyone nevertheless seems to agree that Putin badly miscalculated. One of the reasons they cite is the unexpected scope and intensity of the Ukrainian resistance. Another is of course the massive and largely unexpected support provided by the West, notably in the form of military equipment.

Various statements from authoritative voices in Washington indicate not only that the war is likely to drag on, but that a forever war is what the American strategists have been hoping to see. On his visit to Poland in March, US President Joe Biden invited his faithful followers “to steel ourselves for a long fight ahead…” Three months later, his prediction that the “battle will not be won in days or months” appears to be accurate. Less accurate, however, was his claim that the Russian ruble would be reduced to rubble and that the back of the Russian economy was about to be broken. In April the ruble bounced back to become “the strongest currency in the world this year.” Despite the massive sanctions imposed on Russia and the constraints of war, its economy is still ticking over.

If the pundits, politicians and military elite in Washington, sitting 5,000 miles away, seem more than comfortable with a war that will keep Russia occupied for many months or even years to come, it may be that the people on whose behalf they are stoking the war, standing on the front line of Russian aggression, will become less euphoric as time goes by. So could most Europeans facing the prospect of a dire winter with rationed heating and exploding gas prices. So indeed could Americans themselves, who are already beginning to complain.

The most pitiable victims are obviously the Ukrainians. Even when conducted with an endless supply of modern weapons, the heroism of resistance offers cold comfort to the heroes themselves when as many as 100 Ukrainians die every  day and cities are leveled in a war announced as never-ending. Still, the Ukrainians seem committed. But they increasingly worry their allies may cave. Al Jazeera reports that “officials in Kyiv have expressed fears that the specter of ‘war fatigue’ could erode the West’s resolve to help the country push back Moscow’s aggression.”

Not to be confused with the military apparel known as battle fatigues, a psychological state provoked by enduring wars with no defined goals and afflicting individuals and sometimes entire populations, with the exception of politicians, lobbyists and administration officials working in and around the Beltway.

In recent days, Biden himself no longer sounds quite as triumphal as he did during his speech in Warsaw last March. But US policy has not changed, nor is it likely to change. Losing face is too costly to any politician’s historical legacy. Nevertheless, Edward Luce in the Financial Times notes that “tedium is beginning to creep in” even in Washington, where “Joe Biden’s recent utterances show awareness of the problem.”

Military realism may also be slowly creeping in after months of romanticizing the Ukrainian resistance and self-celebrating the financial support provided by the US and its European allies. “Many of the defects in today’s Russian military — low morale, shoddy equipment, lack of initiative and brutality within its ranks — were also true of Stalin’s Red Army, which eventually defeated the German Wehrmacht,” Luce pertinently notes.

Then there’s Europe, a continent of illusion, where an economically powerful union perennially demonstrates the fact that it is still a collection of culturally and linguistically disparate populations. As a formal union, some things do appear to take collective form but there are no solid structures designed to maintain the coherence of the European Union in the face of ever-present centrifugal forces. At the beginning of this war, the political class, followed by the media, succeeded in stirring a spontaneous identification with the Ukrainian resistance. After all, in the past century, Europeans had finally learned that war on one’s own terrain was always a lose-lose proposition. Invaders should be reviled and automatically punished.

Unlike Americans, however, Europeans do not equate condign punishment with endlessly prosecuted war. They know war induces fatigue. They also tend to be less trusting of the wisdom of their politicians. The average European has no reason to feel proud of NATO or identify with the institution. European politicians, on the other hand, appreciate NATO as a symbolic presence, overseen by Washington, that seems to guarantee that peace, at least among European nations, will endure. Europeans may react instinctively against Russian aggression towards a bordering nation, but they are far less convinced that NATO and the US military umbrella is the permanent key to peaceful relations.

The Ukraine war has revealed a newfound taste among European governments for militarization. And though NATO is at the core of the common security framework, the shock of this war has pushed European governments to think more seriously about an autonomous military collaboration that no longer depends on the US for leadership. That will be complicated to achieve and will take time. But, for various reasons, it may be inevitable.

Few commentators noticed that in the first round of the French presidential election in April, a clear majority voted for candidates that were openly hostile to NATO, on both the left and the extreme right. That may have less to do with war fatigue than NATO fatigue. The monumental damage already being wrought on the European economy as a result of Washington’s insistence on integrating Ukraine into NATO will leave increasingly evident traces in the months and years to come.

Less than a week after the Russian invasion, Hillary Clinton appeared on MSNBC to express what appeared to be the geopolitical reasoning already current in the corridors of power in Washington. She not only forecast a prolonged war, supported by the United States, but she also appeared to relish the idea. She felt it would have an effect similar to that of Russia’s decade-long war in Afghanistan in the 1980s, considered one of the factors that precipitated the collapse of the Soviet Union.

Clinton even described this plan to trap Russia in a quagmire as “the model people are looking toward.” By “people” she was obviously referring to the Washington elite, especially the State Department, which she headed for four years under President Barack Obama. Clinton’s description of this model may have seemed to some observers to be a random thought in her head. But subsequent events indicate that, even on March 1, five days after the launch of Russia’s “special operation,” it was in all likelihood a strategy already fully elaborated, months before Russia’s invasion. This would help to explain the bizarre sequence of events in which the news cycle was dominated by the US announcing the date on which Russia would start its war.

Both Clinton and Biden in their public discourse following the outbreak of the Ukraine war have savored the idea of Russia agonizing on its own without any direct American military presence in the war zone. Washington’s military strategists adhere to the historical model of Russia in Afghanistan that played out in the 1980s. They are now seeking to repeat the pattern in 2022. When Biden’s Defense Secretary Lloyd Austin evokes a “weakened” Russia that no longer has “the capacity to invade its neighbors,” he echoes his president with both seeing a hoped-for parallel between the collapse of the Soviet Union. Biden’s own express wish is that “this man [Putin] cannot remain in power.” US  defense strategy is rarely about defending the nation from aggression and almost always about regime change somewhere else in the world.

In May, Le Monde’s Washington correspondent described “an undeniable euphoria that has gripped part of the ‘blob,’ as Washington’s foreign policy establishment often informally called. This euphoria may even last for a while but not forever. Even the hippie generation, after turning on, tuning in and dropping out, at one point realized that euphoria has its own expiration date. Many of them experienced drug fatigue and communal living fatigue. In the following decades quite a few of them also ended up in the blob, seeking another kind of euphoria.