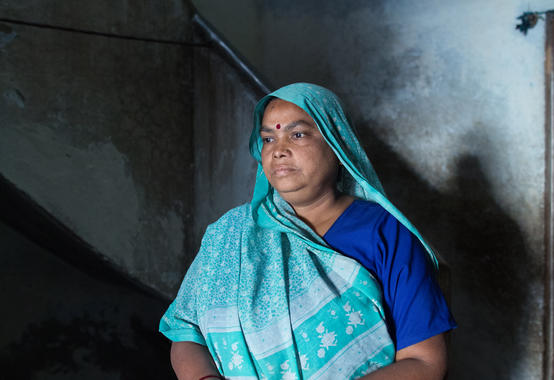 Sangeeta, wandering the streets in a state of shock, had been badly beaten by her husband. To make matters worse, her husband was a constable at the police headquarters, which gave Sangeeta little recourse to deal with the abuse.

She complained that he frequently beat her black and blue, threw her out of the house, and dared her to do any harm to him. I have heard many stories that when women go to the police to report cases of abuse and rape, they are ignored or even open themselves to further abuse. As Sangeeta’s husband was a police officer, she had no hope of ending her torment. She had no way to support herself, and had to survive on the meager amounts of food sent by her parents from their family farm.

Sangeeta’s case was brought to the attention of Humsafar, an NGO working in Lucknow that deals exclusively with cases of domestic physical abuse. Their caseworkers had intensive counseling sessions with both Sangeeta and her husband. It did not work. After a brief respite, the physical and mental torture continued, and her husband’s use of abusive language and violence became worse.

Her husband finally requested a divorce, threatening their children with violence if they dared to appear as witnesses in support of their mother. Legal cases take years and years to appear before a judge and women have to wait interminably in limbo for justice. In Sangeeta’s case, things were further complicated by the fact that the police wanted to protect one of their own.

Nevertheless, Humsafar’s intervention enabled Sangeeta’s husband to be transferred out of the city.

Free legal aid and counseling was given to Sangeeta. She now has her own bank account and is able to live in her home with her children. She receives a monthly stipend of 300 rupees ($30) each for her five children; hardly a sustainable living wage. Sangeeta had to send one son to her husband, in an attempt to improve her economic condition. She can at least live without the fear of being beaten and tormented, however, her psychological scars are very much with her.

On the very next day after Nahida was married, she found out that her husband was having an affair with his aunt. When she inquired about the affair, the beatings began. Her first pregnancy ended in a stillbirth, which she believes was caused by the abusive behavior of her husband.

Nahida was forced to undergo four abortions by her husband as he was having an extra-marital affair and did not want to have children with Nahida. Eventually, she had several children but his violent behavior continued.

Although she filed two separate cases for financial support from her husband — the first one in 2005 — Nahida is still waiting for any semblance of justice. Under Section 125 of the Code of Criminal Procedure, Nahida received a maintenance order of 1,000 rupees per month by the family court. However, to this day, she has never received a single rupee from her husband, who refuses to appear in court; thus reducing the maintenance order to a useless piece of paper.

Humsafar is still trying to help Nahida receive justice through the court system — a daunting task. Meanwhile, the NGO has facilitated her training as a professional cab driver where she can earn a minimal amount to pay for necessities and keep two of her children in school.

Sudha married out of her caste. She fell in love and was married to Mahesh in 2001, to the great disapproval of his parents. Her father-in law, a head constable of a police department in Lucknow, came to their home when Sudha was five-months pregnant and beat both her and Mahesh, threatening that he would go so far as to kill them unless the marriage was annulled. After Sudha registered a formal complaint against her father-in-law, he became more incensed, increasing the harassment and attempted to rape her.

Another women’s organization helped protect Sudha by arranging for her to move into a women’s shelter in another district. After her son was born, Sudha hoped for reconciliation and moved back with her husband, however, her father in-law was not placated and continued his violent behavior. Sudha’s husband also started harassing her and finally abandoned her. Again, she had to move back to a shelter.

Humsafar had to fight a long and difficult battle to get a case registered against Sudha’s husband and father in-law. Unfortunately, the courts in India work on geologic time and the case against her father in-law was lost in a vast ineffective maze of bureaucracy. Her son is now 9 years old and she receives 400 rupees ($8) a month. Sudha now works with Humsafar to help empower women and make them aware of their basic human rights, so as not to be victims of daily abuse and violence.

Manjari was a child bride. At the age of 14, she was married to Ramesh, a man 11-years her senior. Her harassment started after three years of marriage when she couldn’t have a child.

She was sent to her family home by her in-laws but, after some family mediation, she returned a year later to attempt once more to live with her husband. Manjari had three stillbirth deliveries and all the midwives that attended to her births felt it was due to her husband having forceful, violent sex with her during her last trimester. She was told not to allow her husband to do this.

Yet having children did not change her husband’s violent behavior towards her. During sex, Manjari’s husband beat her and bit parts of her body, including her breasts, genitals, and thighs. Whenever she complained about this to her mother and mother-in-law, they used to say that her husband had the right to do anything that he wished to her.

Manjari approached Humsafar and showed them her wounds. She did not want to register her case with the police but Humsafar intervened and counseled her husband, stating that his behavior was criminal. At present, Manjari is living peacefully, her husband no longer sexually assaults her, but she suffers from pain in her thighs and legs.

Rachna, after being beaten by her husband and father in-law, was forced to abandon her baby.

Neha, Rachna’s younger sister, was married and unable to have any children. Neha convinced Rachna to marry Vikram, the brother of her husband. Rachna became pregnant but had a difficult pregnancy and, even though her in-laws refused to provide her with any pre-natal care, she managed to have her baby in a government hospital. However, she became critically ill after the birth and was unconscious for the next 48 hours.

When Rachna finally returned home and tried to be with her baby, Neha claimed the baby as her own. Rachna’s husband even told her that it wasn’t her baby — it was Neha’s child. Rachna’s father in-law attempted to throw her from the balcony and, after fighting him off, she was locked in a room and beaten for five days.

Rachna was forced to leave her baby and go live with her parents. Humsafar is helping her file a case for custody of her child. Humsafar has also facilitated her training as a professional to polish furniture; she is currently working in a furniture factory in Lucknow.