In his short treatise Sanitation in India published in 1912, Alexander Hubbard laid out suggestions to “brighten up [the] little world” of the Indian native which was drowned in “filth and squalor.” The treatise, while best described as patronising in its suggestions, partially succeeded in articulating a socio-cultural reasoning behind the poor sanitary conditions in India. It recognized that for sanitary reforms to succeed one needs to be aware of the “prejudices and superstitions” that afflict large parts of the native population. The British by the beginning of the 20th century had begun to view the problem of sanitation largely as a social issue. They were no longer concerned with the health of the soldiers alone, and the general good health of the public was seen as essential for the smooth functioning of the empire.

Despite having recognized the root of the problem, the government of India was unsure of the progress it had made through much of the 19th century to improve sanitation conditions of the Indian natives. It recognized that the Indian Sanitary Policy of 1914 failed because it blindly applied Western sanitation measures to a starkly different civilizational set-up and did not adequately assess the conditions of life in tropical climates. The mind of the general public had to be endowed with what the government believed was a “higher level of thought.”

Justice Cunningham, who was the president of the Health Society in Calcutta, referred to an angel that would have to descend on India and ennoble the humble native. The angel for him was science, which in his words was another name for “well informed common-sense.” This new scientific approach to sanitation, the British believed, could contribute significantly to improved sanitary conditions in rural and urban India. At this point the British had begun to vocally distinguish between the educated and the illiterate Indian, both of whom were responding in starkly different ways to the newly-developed scientific approach to sanitation. The government of India felt that in the “land of the ox-cart” sufficient attention had to be paid to the fact that the uneducated native was unprepared for drastic change, seen simply as a form of “interference” by them.

Evidently, the problem of poor sanitation conditions in India could not be attributed to the lack of infrastructure alone. Indian society has a unique composition where the scavenger is a scavenger by birth. B.R. Ambedkar, who belonged to the Untouchable Mahar caste, condemned this fixity that was imposed on an individual’s social identity. He recognized that in the cast-ridden Hindu society, birth qualifications preceded the actual work performed as a marker of the individual’s social identity. 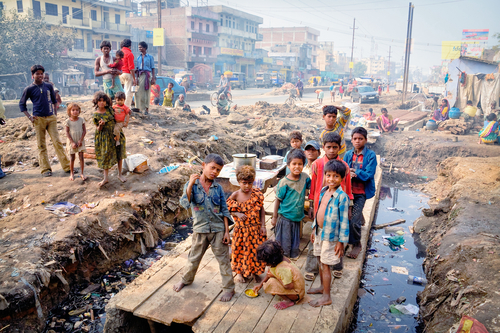 The sanitation framework in India sustains itself on the traditional structure of Hindu society. It is heavily reliant on particular caste groupings who occupy the lowest position in the caste hierarchy for its unhindered existence. Any successful sanitation reform measure would have to take into account the intricate ways in which concerns for purity and pollution would determine the acceptance of reforms, as well as decide who has access to them. For Ambedkar, the problem of poor sanitation in India was a socio-cultural issue since the scavenger was invariably an Untouchable who was a permanent victim of his hereditary occupation.

Recently, the government of Narendra Modi has announced that it aims to end open defecation in the country by 2019. Sixty percent of the world’s open defecators live in India and South Asia has the highest percentage of people defecating in the open. Out of the 1 billion people who have no access to toilets, nearly 600 million reside in India. The current political dispensation plans to invest in 5.2 million toilets, or one toilet every two seconds in its five year term. If lack of adequate infrastructure alone accounts for these figures, the government’s effort to end open defecation is laudable.

Mehrotra and Patnaik in their study show that programs such as the Nirmal Gram Yojana, initiated by the United Progressive Alliance I (UPA I) government, have failed in certain places such as Bastar primarily because of the lack of adequate infrastructure and water scarcity. But in other instances culture is often seen as the root cause of the problem of poor sanitation in India. In Uttrakhand there have been cases when Rajputs, who consider themselves to be part of an upper caste, have refused to clean their toilets as they find the task to be degrading and ritually polluting.

It is not surprising then that technological solutions that are economically feasible are not always finding much success in India. Simple pit latrines, despite being economically conducive, have not always found takers in rural India and only 10% of rural households use them.

A case of a slightly different nature was reported in Punjab where a dangerous mix of politics and caste impacted access to toilets for those belonging to the lower castes. The landlords in a village in Punjab, who were upper caste Jat Sikhs, on the declaration of election results denied access to those belonging to the Schedule Caste to the fields, since the election results did not favor their interests. The fields in rural India are used by many as bathrooms, and this move meant that the lower-caste people were effectively left without access to the only sanitation facility available to them.

For the successful implementation of sanitation reforms in India, the scavenger can no longer remain a scavenger by birth. At the root of the problem is socio-cultural attitudes that continue to shape and are sustained by the traditional Hindu social order, upon which the entire framework of sanitation is placed.

The system of sanitation in India does not exist as an independent structure and it is not self-sustaining. Socio-cultural factors such as the dominance of caste determines the acceptance of reforms in the sanitation system, shapes social attitudes toward certain occupations and ultimately decides who gets access to sanitation facilities. Any successful sanitation reform program would have to deal with an awareness that change, for example, in the form of development of new technologies and infrastructure, cannot be neutral, since its acceptance is contingent upon social attitudes that often prioritize the maintenance of the traditional social structure.

The whole concept of latrines has assumed a unique socio-cultural meaning in India. The recent SQUAT survey suggests that it is not the scarcity of water or simply a lack of access to toilets that pushes people to use alternatives such as agricultural fields as toilets. Some claim that the concept itself is alien to many, as ownership of toilets in north India has not had a bearing on the reduction of open defecation. While some choose to use the fields because toilets close to the vicinity of the house are considered to be polluting, others do not use it because the eventual cleaning of the latrines is perceived to be ritually degrading.

For the successful implementation of sanitation reforms in India, the scavenger can no longer remain a scavenger by birth. At the root of the problem are socio-cultural attitudes that continue to shape and are sustained by the traditional Hindu social order, upon which the entire framework of sanitation is based. 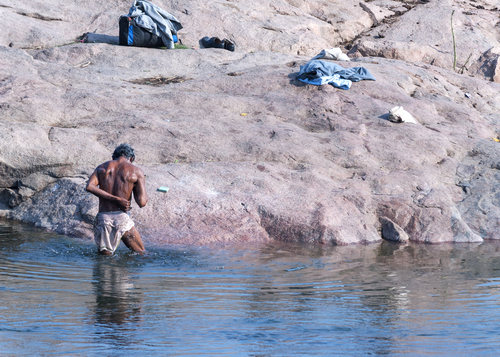 In such a situation there are two options that can ensure the success of sanitary reforms in India: Either the entire sanitation framework is built as such that it is self-sustaining without necessarily tackling the caste question directly and focussing instead on providing alternatives to the existing system. This would involve the development of technological solutions that eliminate the reliance on former Untouchables—the term is no longer legal in India—on an unequal footing to maintain the sanitation structure.

The focus has to be not only on the building of toilets—rather it is the design of the toilets that should assume more significance. This could involve the construction of pour-flush latrines as opposed to dry latrines, since the latter rely heavily on the former Untouchable community for maintenance. But because of water scarcity, technological solutions will have to focus on designing toilets that can be sustained without access to water. Dr. Kishore Munshi has developed the dry hygienic rural toilet that is cost-efficient and eco-friendly, which sustains itself as a waterless system.

Alternatively, the second option could focus on a radical restructuring of the Hindu society to break the occupational fixity imposed by caste. This would involve sustained efforts to mainstream the former Untouchables by empowering them. This can certainly work, as is evident from the reduced market for pit emptying services today. Many claim this is because of a sense of revulsion in the minds of the former Untouchables toward what is seen by society as their traditional occupation, as much as it is because of the availability of alternative occupations they have finally begun to consider for themselves.

While poverty and the lack of infrastructure maybe partly responsible for the poor sanitation conditions in India, it must be adequately stressed that the construction of toilets in itself will not solve the problem. An awareness that the physical infrastructure and the people who sustain it are operating within a social framework that is not receptive to drastic change is essential to planing the nature of reforms—something the British had recognized early on as they set out to establish their rule in India.

A recent UN report noted that open defecation has been reduced in India by 31%. While the government focuses on building the appropriate infrastructure that is numerically significant and economically efficient, it must simultaneously address the question of caste as a major factor shaping social attitudes and policies. Is India ready for the “annihilation of caste,” or is gradual change based on the development of a self-sustenance model the way ahead?

The Search for Water in Gaza

Water is the Essence of Life