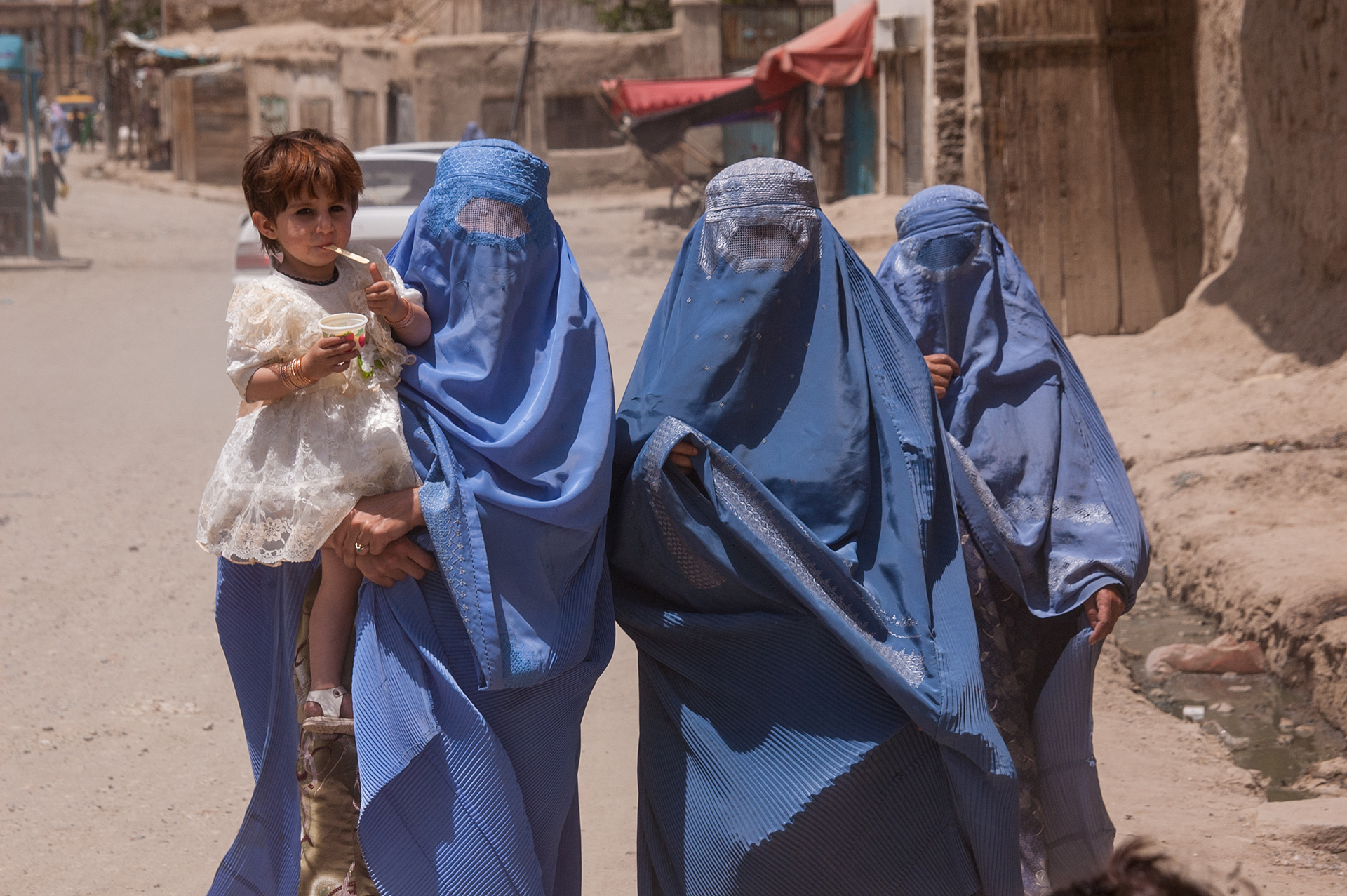 Kabul, Afghanistan – May 2004: Women in burqas in Kabul walking with a child © timsimages.uk / shutterstock.com

Apartheid refers to the systematic racial discrimination and segregation that took place in South Africa between 1948 and 1991 against whites, Indians, and black Africans. After over 50 years of enacting racial discriminatory legislation, this segregation—which resulted in mass migrations, displacements, and discrimination—finally came to an end when South Africa conquered the supremacy of whites and began to progress toward democratization.

The term hegemony of masculinity, which was first used by R. W. Connell, describes the social hierarchy that tends to validate the superiority of masculinity over feminine, and is founded on historical precedent or adheres to societal norms. It defines a male-dominated social structure that denies females with feminine traits the right to participate in public life. Tragically, this hegemony leads to a heteronormative social structure and the predominance of heterosexism in Islamic doctrines.

The political discriminatory ideologies of apartheid have been widely employed in several fields of social science ever since Daniel F. Malan first articulated it. Gender-Apartheid is the systematic discrimination of individuals based on whether they were born a man or a woman. Gender-apartheid and the term sexism are connected through historical and cultural roots, which are still tangible in the modern world.

With six sections and 30 articles, the UN General Assembly approved the Convention on the Elimination of All Forms of Discrimination Against Women in 1979. This treaty emphasizes and puts into practice the rights of women and girls around the world. It protects them in areas like discrimination, policy measures, the defense of fundamental freedoms and rights, sex-role stereotyping and prejudice, prostitution, political and public life, representation, nationality, education, employment, health, economic and social benefits, law, marriage, and family life. It has since been ratified and adopted by one hundred eighty nine states. However, despite having signed the pact in 1980, gender discrimination still exists in Afghanistan under the Taliban’s rule.

The Taliban runs a de facto government that is not officially recognized. They are centered on a fundamentalist interpretation of Islam, and have close ties to the terrorist group al-Qaeda. On August 15, 2021, the Taliban took back Kabul, and since then they have ruled Afghanistan with an Islamic system based on the Deobandi school. The Taliban progressively began to implement their ideologically-based teachings throughout the nation; among them, the Taliban are passing anti-feminine legislation and marketing them as Islamic teachings through their media apparatus. Their curriculum is dominated by masculinity and violates the Convention on the Elimination of All Forms of Discrimination Against Women.

In the 1948 Universal Declaration of Human Rights, the UN lists the right to an education as one of the most important human rights. This is a cosmic and global right, not one that is exclusive to a place or location. Everyone is entitled to a high-quality education, regardless of their race, color, ethnicity, country, or gender. The Universal Declaration of Human Rights emphasizes the value of education, which includes tolerance, community, and mutual understanding among all people, as well as the right to be educated.

In opposition to international values, the Taliban regime has denied Afghan girls and women the chance to enroll in schools and institutions. The Taliban government may be utilizing the education of Afghan women as a tool to pressure Western democracies to embrace them. However, It is evident that nothing has changed to date, despite the fact that sanctions against the Taliban’s administration have gotten tougher.

Under the Taliban government, women no longer play an active part in society. At the cabinet, provincial, or municipal levels, no women have been appointed by the Taliban. In actuality, the Taliban rule has usurped the social lives of women and, by relegating them to the private sphere, has diminished their stature. The Taliban regime’s workforce is patriarchal and sexist in this sense. It might be argued that patriarchy has a significant impact on the Taliban’s administrative structure.

The Taliban bureaucratic system’s gender-centricity cannot be boiled down to a call for recognition. In fact, one of the tenets of the Deobandi school, which forms the Taliban ideology, values that the public sphere should be gender-centric. As a phenomenon, work is considered to be man-centered. The fatwa that permits women to work in a setting where there is no chance for conversation with males is the only area where the Deobandi school has shown flexibility so far on women’s right to employment. According to this, the Taliban’s manifesto has a clause that is said to support the barring of women from bureaucratic roles.

The Taliban’s anti-women policies diminish the idea of women as fully human beings. Women are denied citizenship rights and are not regarded as social contract signatories under this system. Due to the Taliban regime’s treatment of women, Afghan society has regressed both politically and economically. A political setback is the absence of women in the public sphere, the centralization of Afghan bureaucracy, and its concentration on the position of the man as well as the political exclusion of women from these positions.

Women have less economic influence under the Taliban government. The Taliban system makes women into workers with very low human capital, little incomes, and limited opportunities for growth in the workplace by denying them the access to study. Women who work as men’s employees won’t advance because they lack the capacity to handle affairs. On the one hand, this economic paralysis of women contributes to the inefficiency of half the people of the society, and on the other, it causes the economic paralysis of the entire nation.The Taliban administration imposed gender segregation and patriarchal control on Afghan society by defining women in the private sphere. Afghanistan’s radicalization eventually will only lead to disaster and the emergence of a radical generation. [Charlize Cheesman edited this article]