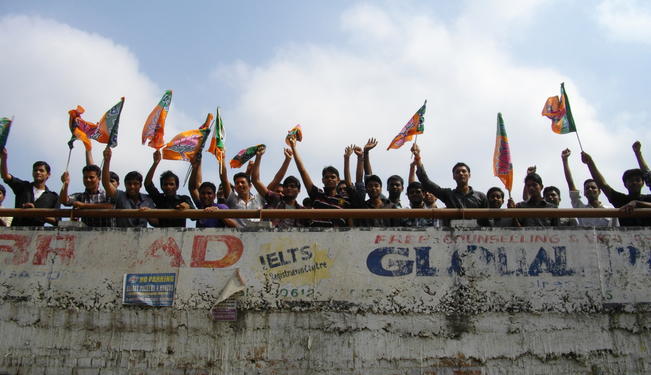 Should the US begin greater engagement with Narendra Modi?

India's leading opposition party, the Bharatiya Janta Party (BJP), has officially announced Narendra Modi, the chief minister of the state of Gujarat, as the party’s prime ministerial candidate for national elections scheduled for early 2014. The leader is regarded by some as one of India’s most controversial politicians, due to his alleged involvement in communal riots in Gujarat in 2002 that resulted in the deaths of more than 1,000 people – mostly Muslims.

Human rights groups have accused Modi and other officials of not taking enough action to stop the riots, and thereby failing to protect the Muslim victims. Although the Indian Supreme Court cleared Modi of all charges stemming from the riots, the United States has continued to bar the minister from entering the country since 2005.

The US State Department not only denied Modi a diplomatic visa but also revoked his tourist visa pursuant to the Immigration and Nationality Act, which bars the provision of such visas to any government official who is “responsible for or directly carried out, at any time, particularly severe violations of religious freedom.” The European Union (EU) had similarly imposed a diplomatic boycott on Modi.

At a time when India’s overall economic progress is slowing and inflation is rising, Modi has managed to transform Gujarat into a thriving hub for domestic and foreign investment. He has done so by enacting pro-business policies and efficiently managing the application process for grants and permissions. For example, in 2008, when India’s leading industrialist, Ratan Tata, faced stiff opposition to setting up the main manufacturing unit for the Nano in West Bengal, Modi facilitated land, permissions and infrastructure for Tata Motors and within days the main Nano plant was operational in Gujarat.

In a recent poll conducted by Economic Times/Nielsen, an overwhelming majority of India’s leading business leaders said they would prefer to see Modi lead the country.

Recognizing the political and economic gains to be made by engaging with Modi, countries like the United Kingdom, Germany and Belgium have changed their stance towards the leader. British Prime Minister David Cameron’s government revoked the UK's diplomatic ban against Modi in 2012. It has since engaged in several high level economic and political dialogues with Modi. British parliamentarians have also invited him to speak at the House of Commons. In February 2013, the German ambassador to India indicated that Germany and the rest of the EU were ready to end the informal boycott.

Soon thereafter the Belgium consul general to Mumbai, Karl Van den Bossche, told the media that: " [The] EU is positive and constructive about reaching out to Gujarat and is also willing to engage with the chief minister." Of the 13 billion euro trade between Belgium and India, roughly 80 percent is in diamonds – a trade that finds most of its investors in the state of Gujarat. Sweden and Denmark have followed suit. By contrast, the US has refused to retract its own ban.

The Obama administration’s reluctance to change its stance towards revoking Modi’s visa status has already come under pressure domestically. Even as Modi has often had to resort to video conferencing to connect with his growing number of non-resident Indian supporters across the US, in March 2013, an 18-member congressional delegation led by Republican Aaron Schock paid a personal visit to Modi in Gujarat. Karl F. Inderfurth, the former assistant secretary of state for South Asian affairs, has also been quoted in the media as saying that the Obama administration should find ways to engage with Modi.

Although a Modi victory is hardly inevitable, opinion polls suggest that Indians are more likely to elect Modi than his opponent, Rahul Gandhi of the Congress Party. Despite being the scion of one of India’s most revered families, Gandhi faces stiff competition from Modi, whom Indians across the country and overseas believe could be the answer to the country’s growing economic ills. In his campaign rallies, Modi has often said he is ready to bring the “Gujarat model” of development to the national level if he wins the premiership.

As Indians prepare to go to the polls, the US finds itself in a quandary. Should Modi win the elections, it could prove awkward for Indo-US bilateral relations to move forward. India is a critical component of Washington's rebalance to Asia and represents a huge potential market for US exports and investments. As the US continues its withdrawal from Afghanistan next year, Washington also has a strong interest in improved relations between Pakistan and India. By engaging in constant dialogue with Prime Minister Manmohan Singh, President Barack Obama was able to ensure that even during periods of high Indian-Pakistani tension, India continued to show restraint.

The US may find it difficult to continue facilitating improved relations between the two neighbours in the future, if it does not have a similar cooperative relationship with Modi. Should Modi become India’s next prime minister, will the US be able to ingratiate itself with him, even if the Obama administration only issues him a visa after he has ascended to the pinnacle of Indian politics?

At the same time, however, international human rights groups have been vocal in their criticism of the softening stance of Western leaders towards Modi. In light of his troubling past behaviour, they say, Washington should engage Modi only if and when he wins the Indian elections next year.

Should Modi become prime minister, the US will have to end its diplomatic boycott of the Indian leader. In the months leading up to the elections, the White House will have to carefully weigh the merits of its continued reluctance to engage a rising star in Indian politics, whose leadership record provides ample grounds for both hope and concern. While the US may deem it premature prior to the elections, a shift in posture should not be ruled out eventually — even as Washington’s reticence towards Modi is understandable.

*[Note: Harshita Kohli is an Associate Research Fellow with the US Studies Programme at the S. Rajaratnam School of International Studies (RSIS), Nanyang Technological University. This article was originally published by RSIS.]