Foreign policy is too important to leave to the “professionals.” Through art and culture, we can all work to make the world a better place.

The position of the body is the same. The figure is prone on the beach, near the water’s edge. The head is face down in the sand, and the face is just visible. One arm is close to the body, palm upward. The knees are bent, the feet together.

This is not Alan Kurdi (initially misreported as Aylan), the 3-year-old Syrian child whose body washed up on shore in Turkey. It is the Chinese artist Ai Weiwei, who staged a photographic reenactment for the newspaper India Today. He is not dressed in toddler clothing, nor has he shaved his beard to make himself appear younger. He is not after verisimilitude. He is paying homage.

At one level, the artist is simply expressing solidarity with the refugees that are pouring out of the warzones of the Middle East.

In January, Ai set up a studio on the Greek island of Lesbos, which has been an entryway into Europe for many of the refugees. He has shared photos of life in the refugee camps with his many social media followers. He withdrew his art from two museums in Denmark after the Danish parliament passed a law allowing the government to seize property from asylum-seekers. He is planning a memorial to the refugees who have perished during the crossing. It’s made out of 14,000 of the poorly made lifejackets that surviving migrants discarded on arriving in Lesbos.

At another level, Ai Weiwei is making a bold statement about iconic representations.

The initial photo of Alan Kurdi shocked many people into recognizing the enormous cruelty of the refugee exodus. But after the photo was reproduced so often, it could not help but lose its initial capacity to arouse outrage. Can Ai Weiwei use his own iconic status to somehow refocus international attention on the continuing plight of the migrants?

Some of that attention has necessarily turned toward the artist himself, and not in a positive way.

“In his bizarre beach-lying ego trip, Ai also demonstrates what can happen when artists blunder too unthinkingly into big political issues,” writes Tim Teeman in The Daily Beast. “Instead of highlighting their cause, in their effort to shock, they can undermine it. Indeed, this is the biggest problem with Ai’s beach picture: it is all about him, and not about refugees, or the refugee crisis. It’s a pretty picture, whereas the picture of poor Aylan Kurdi — and all it stood for — was anything but.”

Teeman has reduced art, at least in this case, to little more than ego plus aestheticism. Ai Weiwei, he is arguing, is fundamentally irresponsible—for not thinking more and inserting himself less. It’s a strange criticism coming from Teeman. As a journalist who doesn’t generally cover politics—he writes mostly about popular culture—he is doing precisely what he faults Ai Weiwei for doing: foregrounding his own opinion (as opposed to sticking to the facts like a journalist) and wading into “big political issues” without thinking very deeply about them. Moreover, just like the Chinese artist, Teeman is aiming to provoke.

“The jails in the Middle East are filled with artists, poets, playwrights. They are the risks. They are the people who are inspiring the people. The authoritarian regimes have figured this out. Why haven’t we?”

Well, we often criticize that which we fear, deep down, applies to ourselves as well. Still, Teeman inadvertently raises some important questions. What role can artists play in not only addressing political issues, but also helping to resolve political problems? As provocateurs, can artists do more harm than good? Is all art inherently political—or are politics and art antithetical?

I’ll explore these questions not only in this column, but also in a new initiative at the Institute for Policy Studies that we’re calling Epicenter. Our new effort explores the intersection of politics and culture, precisely the territory that Ai Weiwei inhabits.

More on that, however, after a word from Madame President.

The United States and the Arab world share this in common: Neither has had a female leader in the modern era. American voters might overturn the patriarchal status quo in the November elections. Arabs, meanwhile, will have to content themselves with the virtual reality of a female president.

In a new TV drama, Madame President, the imaginary Arab country of Jabalein has just lost its leader to a heart attack. Noura Saad, the minister of planning and development, ascends to the presidency, but only for a year until the next elections. During this short tenure, she faces the usual problems of the region: water shortages, unemployment, civil unrest, political intrigue. On top of that, she must address concerns from colleagues and citizens alike that a woman is somehow not fit to be president.

Though it draws some musical and visual motifs from House of Cards, this production by Search for Common Ground and a Jordanian multimedia company relies more heavily on Tia Leoni’s Madam Secretary for inspiration: similar rise to power, nearly identical family make-up and comparable conspiratorial backstory.

What it lacks in humor and fast-paced storytelling, Madame President makes up for in earnestness. It wants to address issues that are often off-limits in public debate in Arab countries: the status of women, the limits of civic protest, the prevalence of corruption. In the first episode, the new president decides not to crack down on young protestors upset over rising prices and unemployment. Instead, she meets face to face with them, listens to their demands and releases their detained compatriots. Crisis averted! 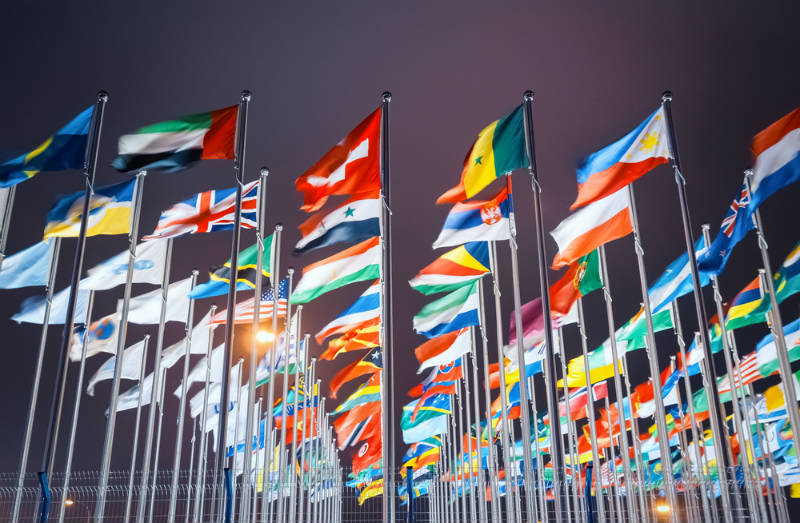 Search for Common Ground has pursued this popular culture strategy in several parts of the world—a children’s TV show in Macedonia promoting intercultural understanding, a soap opera about social issues in Guinea, and a multi-nation TV show about footballers called The Team.

You might argue that soap operas are not art. You might also argue that art should not be in the business of answering questions, only asking them.

These are legitimate challenges. But instead of this dualism of art/not-art, I prefer to imagine a spectrum that runs from more provocative to less provocative. On one end of the spectrum, the artist-dissident is throwing a pie in the face of convention: wake up! At the other end of the spectrum, the artist-diplomat is offering us the same pie as reconciliation and sustenance: eat up!

Our new program at IPS, Epicenter, is devoted to lifting up the work of artists as both dissidents and as diplomats—those who help to provoke conflict where the status quo is unjust and those who hope to resolve conflict where the status quo is violent. We’ll be focusing on the Middle East for the next year, with a particular emphasis on Iran. The nuclear deal—signed in July 2015 and implemented in January 2016—offers a tremendous opportunity to improve American-Iranian relations and pave the way for the resolution of key conflicts in the Middle East: in Syria, Iraq, and even Israel-Palestine.

Since the US and Iran do not have formal diplomatic relations, much of the work of reconciliation must take place indirectly—through third parties, in second-track diplomacy and by people-to-people contacts. One of the more successful examples of this kind of public diplomacy has been in sports. Like soap operas, athletic contests can often reach more people than exchanges in the fine arts.

Last week, for instance, I wrote about the extraordinary case of “wrestling diplomacy” between Iran and the United States. Iranian wrestlers participated in the “Rumble on the Rails” in Grand Central Station in 2013. The next year, a US team participated in the World Cup of Greco-Roman wrestling in 2014. What makes these exchanges so important is that, first of all, Iranian wrestlers are so much better than their US counterparts—so a certain respect for Iranian culture and traditions is implicit in the exchange.

Also, as Bahman Baktiari, the executive director of the International Foundation for Civil Society, explains: “Wrestling appeals to conservative elements. Iranians start matches with prayers. Most of the logos in the arena are from the Koran. We are connecting to an important segment of Iranian civil society that we were not reaching before.”

Epicenter will tell these stories of the peacemaking component of culture. But it will also tell stories about the provocateurs.

“Art and culture is a great way to ensure accountability,” Manal Omar of the US Institute of Peace told an audience at a session on “Art in Response to Conflict” sponsored by the Middle East Institute last week in Washington, DC. She pointed out that in a perverse way, artists are accorded more power and status in authoritarian countries. “The jails in the Middle East are filled with artists, poets, playwrights. They are the risks. They are the people who are inspiring the people. The authoritarian regimes have figured this out. Why haven’t we?”

Epicenter will amplify the efforts of organizations working with both the dissidents and the diplomats. Follow us on our Facebook page to read articles, see videos and learn of events that are changing the face of the Middle East. Foreign policy is too important to leave to the “professionals.” Through art and culture, we can all work to make the world a better place.