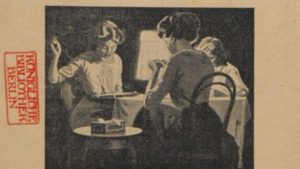 Women’s Effort in War Time (1914). World War I has been described as the first Total War, requiring the efforts of the entire population, not just those in fighting forces. Production on an unprecedented scale was required to produce munitions, but also food and other equipment necessary to keep armies able to fight over an extended period. All members of a population were expected to “do their bit,” and those not conspicuous in their efforts could fall under suspicion. This booklet provided instructions on how to make simple clothes and other materials such as caps, bandages and other items of uniform.