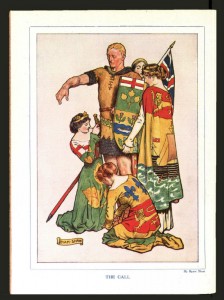 The Call (1916). Allegorical images such as this were used to reinforce the message that the nation itself was calling on all people to “do their duty.” This illustration, by the artist John Byam Liston Shaw, shows a Canadian man being dressed for battle by women representing the provinces of Canada. (Courtesy of the British Library.)