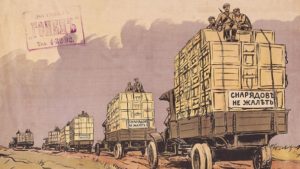 Anything/ Everything to Win! (1914-17). As well as production, all states needed to raise money in vast quantities to feed their war effort. War savings, paid for by the population, were an important way of raising money and advertisements for war bonds schemes were used across Europe and America. A common tactic in such adverts was to show a depiction of what the loans, if successful, would buy. This poster from Russia, advertising war loans with interest at 5 ½ %, shows the cart loads of munitions heading to the front, accompanied by smiling soldiers.