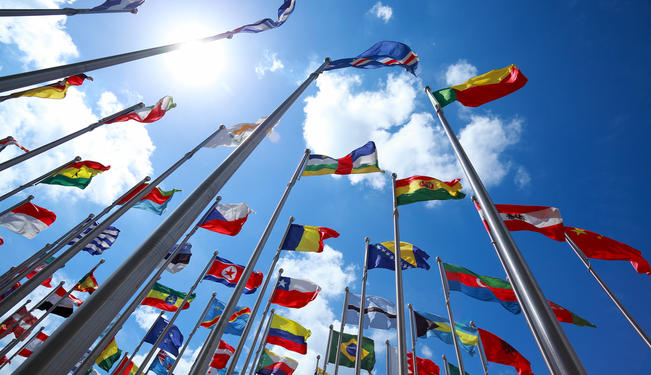 This week, researchers found a large reservoir of melt water under Greenland ice "that persists throughout the winter." The melting of ice has been causing a rise in sea levels for the past century. Already, we are facing an extinction crisis with dozens of species going extinct every day. Something has to change before we run out of time.

After the attacks on September 11, 2001, the US responded with a quest for security. It waged two wars, engaged in torture, and started eavesdropping on conversations around the world. Americans never had an honest debate about the tradeoff between liberty and security for two reasons.

First, they were going through a paroxysm of patriotism under former President George W. Bush. Second, they were unaware of the extent of surveillance that they were being subjected to. That debate is now finally taking place.

In a damning 68-page judgment, Federal District Judge Richard Leon called the methods of the National Security Agency (NSA) "arbitrary invasion" that was "almost Orwellian." The case was brought forth by Larry Klayman, a conservative activist, and another case brought by the American Civil Liberties Union (ACLU) is being heard in New York. Both the right and the left are uniting to protect the Fourth Amendment that guarantees citizens "their persons, houses, papers, and effects, against unreasonable searches and seizures."

As widely predicted, Michelle Bachelet won the second round of elections to become Chile’s president. She was the country’s first female president who was in office from 2006 to 2010. Evelyn Matthei, her defeated rival, had voted for a continuation of military rule under General Pinochet in the 1988 plebiscite. Furthermore, unlike Bachelet’s father, who was imprisoned and tortured by the Pinochet regime, Matthei’s father was a loyal member of the junta.

Brazil’s unemployment rate dropped to a ten-year low to a mere 4.6%. The seemingly positive change disguises one key fact: fewer Brazilians are working and even fewer are looking for work. The unemployment rate measures the number of people actively looking for work as a percentage of the labor force. So the statistic is misleading. What is more revealing is that the Brazilian economy shrank by 0.5% in the third quarter. With an inflation rate of 5.77%, Brazil is in no position to adopt the quantitative easing of the US to devalue its currency. The alternative is structural reforms such as reducing red tape, curbing corruption, and improving infrastructure. These are hard to achieve and Brazil’s political leadership has yet to display enough appetite for tough reforms. As of now, Brazil is headed for a period of economic weakness.

Sweden’s Saab won a $4.5 billion deal to supply 36 fighter jets to Brazil. Boeing suffered because Brazil was miffed by revelations that the NSA was spying on President Dilma Rousseff.

Raul Castro, brother of Fidel and current Cuban president, followed up his handshake with President Obama with a call for "civilized relations" with the US.

Russian President Vladimir Putin pardoned and released the former oligarch Mikhail Khodorkovsky after ten years in prison for fraud and tax evasion. At the time of his arrest, Khodorkovsky was Russia’s richest man and he has since been Russia’s most famous prisoner. In a deal brokered by Germany, Khodorkovsky asked for a presidential pardon for family reasons and Putin granted him clemency on humanitarian grounds. After release, he was flown to Berlin where he astutely chose the Berlin Wall museum at Checkpoint Charlie, the former crossing point between East and West Berlin, as the venue for his press conference. He declared that he will be working for the release of all political prisoners throughout the world.

This has been a busy week for Putin. Earlier, he promised Ukrainian President $15 billion and lowered the price of gas from $400 to $268 per thousand cubic meters to draw Ukraine closer to Russia.

In Egypt, former President Hosni Mubarak’s sons, Gamal and Alaa, were cleared of any wrongdoing as was Ahmed Shafiq, a former prime minister under Mubarak. At the same time, former President Mohammed Morsi and 35 other top Islamists were charged with conspiring with foreign groups to commit terrorist acts. The "terrorist plan" was said to date to 2005 and involve the Palestinian group Hamas, the Shi'ite Islamist government of Iran and its Lebanese ally, Hezbollah.

As Islamists grow in strength in Syria, the US and other Western powers are getting lukewarm in their support for the opposition. This week, the international community indicated that they might accept the continuation in power of Syrian President Bashar al-Assad. This has created a rift between Western powers and its Sunni allies led by Saudi Arabia. Fearing that Syria could become a center for global jihad, the US is sympathetic to the Russian idea that the Alawites, with their experience of five decades in the army and security, are the best bet against Islamists.

South Sudan is experiencing full-blown conflict. President Salva Kiir and former South Sudanese Deputy President Riek Machar are engaging in a bloody power struggle. Machar’s troops have captured Bentiu, the capital city of Unity state. The death toll from a week of violence has crossed 1,000 and the number of internal refugees has crossed 100,000.

In Nigeria, attacks by Boko Haram Islamists have killed more than 1,200 people since May. The US has already declared Boko Haram a terrorist organization and announced a $7 million bounty for Abubakr Shekau. President Goodluck Jonathan has sent thousands of troops aided by air cover to crush the four-year uprising. Mobile networks have been switched off, making news about what is going on hard to get. Many suspect the government of human rights abuses, civilian killings, and dishonesty about its own fatalities.

The US ambassador to the UN visited the Central African Republic where grotesque violence persists despite the presence of French and American troops. Religious hatred is compounding ethnic divisions in the country. After Christian militia slaughtered 60 Muslims, Islamic Séléka Coalition rebels killed almost 1,000 people in two days. This violence is likely to continue because no major power has the will to deploy troops in the country and French soldiers will not be enough.

Radical Islamist groups are growing in strength in Tajikistan. Repression is backfiring in a country characterized by chronic poverty, high unemployment, and widespread corruption. A 2009 law criminalizes any religious activity not registered with the state, bans private religious education, and limits the number and size of mosques. A 2011 law bans minors from attending organized religious events, effectively ensuring that under-18s cannot enter mosques. This is turning frustrated youths to secret radical groups.

Bangladesh continues to remain in turmoil as old historic wounds are opened. Last week, Abdul Quader Mollah, a senior leader of the Jamaat-e-Islami party, was executed for war crimes committed in 1971. Bangladesh was ruled by Pakistan till 1971 and was subjected to discrimination, repression, rape, murder, and other human rights abuses by Pakistani troops and their collaborators.

While Bangladeshis protest against Pakistan, Pakistanis are protesting against the US for its drone strikes in their country. The risks on the overland route for convoys have increased to such a degree that the US is considering the much more expensive options of using the northern Uzbekistan supply route or even flying supplies in.

Like Pakistan, India is also involved in a spat with the US, except it is for an inconsequential issue. An Indian diplomat was arrested for suspicion of exploiting her maid by underpaying her while making her work excessively. More importantly, she is suspected of creating false documents and lying to US officials.

The machismo in East Asia is increasing every week. Japan approved its first-ever national security strategy. It is a rollback of Japan’s peacetime constitution drafted after World War II and announces an expensive five-year military build-up. Following a draconian bill curtailing transparency that the author condemned, this nationalist step is unwise for an aging Japan with an ailing economy.

In China, Rear Admiral Yin Zhuo told the state-run People’s Daily that the US can sail freely but not interfere with China’s freedom to sail. If it does so, Yin has declared that "we will block you."

Meanwhile, Apple has signed a deal with China Mobile to supply iPhones. The world’s biggest phone company with the highest number of users will now offer its customers the most desirable phone. China now has another big corporate ally to lobby the Congress on its behalf.