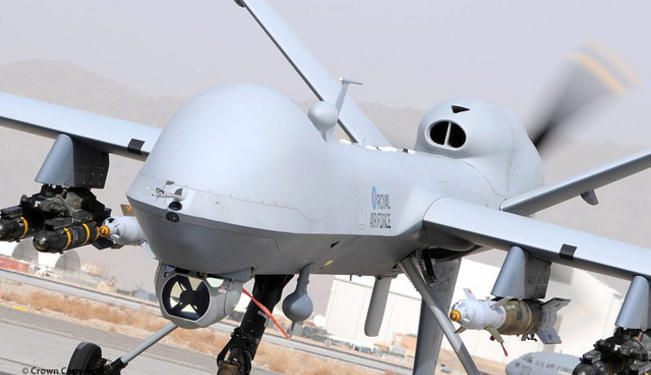 As new technologies change the way war is waged, important new 'sociologies' emerge – both within the nations inventing and using the new weapons and among those upon whom they are inflicted.

For that straw and mortar community, they are smitten as if by a mysterious, Old Testament retribution. There are the chickens scratching the earth for seed, the kids chasing a ragged ball about the courtyard, the women cooking the vittles, the men smoking and arguing about the weather… or the war… and then without even the warning that lightening allows for thunder, they are zapped, blown to smithereens by something inexplicable from the sky.

For the dispatchers of this 21st century phenomenon, it is cleaner than dropping a bomb from 30 thousand feet. It is an arcade experience, guiding an explosive to its target with a joystick in Florida.  Instantaneously assured of a kill, and soon after to lunch at the cafeteria down the hall.

For us observers, either reading of the strike over coffee in the American burbs the next morning or as humanitarian workers, driving our 4 wheelers into the destruction the following day, the sociology of it all – on both sides – seems transformative.

I remember… it was on the eve of my departure to Vietnam in 1969 as an infantry lieutenant when my draft deferred peers had taken me down to a lower east side bar in Manhattan to get me good and drunk and then to regale me with a sort of farewell. To the tune of Stephen Foster's Camptown Races, they had bellowed, “you’re coming home in a body bag… Doo Da… Doo Dah”. On and on into the night they bellowed the refrain till the joint finally closed.

Yes, it was gallows humor but the alternative of your 'exempted' acquaintances embracing you with pity would have been far worse.

You see… the body bag was the all-resounding symbol. And beyond the revelry of debauched college kids, it also increasingly caused mainstream America to pause and question the whole assumption behind war in south east Asia. The more so as the media slowly and doggedly asserted its independence from official pronouncements and revealed the complexities behind the assertion of American power overseas. An American public confounded by tenuous connections between conflict overseas and security at home soon gathered around the' body bag as symbol ' for policy gone tragically wrong'.

By the time I landed in Saigon, that sense of public antagonism had infected the already depleted morale of the  infantry on the ground  By 1969, fewer and fewer of their fellow boomers back home were available to take a bullet for Uncle Sam;  my troops knew that deferments, back there,  were a dime a dozen. And "in theater", in what was to become commonplace for America’s soldiers, whether that be Vietnam or later in Iraq, or Afghanistan, the troops stewed inside perimeters and on patrol, fully aware that despite the declarations of their uniformed and civilian leaders about 'winning hearts and minds', everyone outside their perimeter soon enough had to become the enemy.  In today's parlance, all of them soon were – 'the other'.

This particular dynamic streamed within the larger emerging  post World War 2 sociology whereby  American citizens would tolerate less and less risk, per se, across the board.   Middle class America had begun to move about with a lawyer's phone number in one pocket and a package of insurance policies in the other. Hanging onto the good life and the eradication of physical pain had become a national passion and imperative.

Drones are but one of the latest manifestations of that dynamic. For the United States, it is a type of war without its own casualties, at least in the immediate.  There are no body bags, no caskets unloaded at Andrews Air Force base, no uniformed color guard at the interments. And, dangerously, little congressional vetting.

But there is another associated quandary and this pertains to the impact of the technological imbalance between America and its adversaries. For sure, from harnessing horses for war by the Assyrians to the longbow at Agincourt to the awful mission of the Enola Gay over Hiroshima, new technologies have always redefined combat. Sometimes, more recently, in ways not anticipated by the West.  In the face of overwhelming air power, Bac Ho turned the tables and won many hearts and minds in the USA, from the 1968 Chicago democratic convention onward.  The insurgency within Iraq responded to Apache gunships and Abrams tanks with videos which went viral on the worldwide web and featured western heads, severed. Palefaces like me who plied the roads of Iraq distributing humanitarian assistance had a street value, delivered, of 50k.  9/11 and the ensuing restrictions of our civil liberties resulted, to some extent, from the American military presence in the Islamic Holy Lands.

For those on the receiving end – both the innocents and the complicit – generalized predictions are difficult to come by.  Fate, tragically, has placed them in a war zone to begin with.  How is zapped distinguished in their minds and culture from being strafed by a helicopter or over run by uniformed infantry… options with at least as many causalities for them, probably more. Are they so confounded and overwhelmed by the 'shock and awe' of a drone, that they concede more readily to distance themselves from home grown insurgents?  How different is the dynamic when there are no flesh and blood foreigners advancing on you; when there is no one in front of you to engage?  The answer is unclear.  And some would say the discussion premature since drones, as we speak, are only now gathering first momentum for the way America projects power overseas.

So, while drones probably have an inevitability to them, given how America is redefining warfare as it builds a colossal and seemingly often flawed defense against terror,  it is unlikely that drones – notwithstanding their antiseptic nature at their origin – will not engender future blowback for the hegemon. Whether they work, meaning whether by their remote origins in the sky and their devastating impact, they incite more abiding hate for the joystick in Florida and the nationality of the person managing it than would have been incited by a platoon of foreign soldiers surrounding them at first light, is unclear.

What remains clear for the time being is that the willingness to use these drones by official Americans will  increase and that their use, barring a new and pervading sense of global community by American citizens, will not bring citizens to the streets to contest the conflicts the way body bags did in bygone years.

Further and coincidentally, along with the absence of citizens taking to the streets, so too will fade the lore and legend of the American G.I. – the 101st at Ardennes – its screaming eagle – soon enough becoming transmogrified into Van Heusen man in his baffled cube, working in high end industries where the margins are magnificent.