In the United States, common narratives circulated by the radical right and right-wing extremists about the coronavirus pandemic include racist, anti-Asian stories of the virus’ origination, xenophobic calls to close all borders as well as “liberation” protests that argue that government shutdowns are meant to strip people of their rights and freedoms. Gender, a common frame used in radical right and right-wing extremist ideological narratives, has been primarily discussed at this time in terms of increases in misogynist online harassment.

Without a doubt, gender is a component of radical-right discourse around the pandemic in the US. As a narrative frame, it is used to pose connections that leverage conservative frustrations and fears of government overreach and social change. It is currently unclear whether protestors using gendered, specifically feminized images and slogans are members of any specific radical-right groups. In spite of that, their uses of gender indicate that radical-right narratives are both rhetorically effective and connecting with broader political discourse.

Illustratively, recent protesters have used gendered slogans such as the typically leftist, pro-choice slogan “My Body My Choice,” and a male protester dressed as a handmaid from the dystopic feminist novel and TV show adaptation, “A Handmaid’s Tale.” The use of the slogan and costume are appropriations of leftist activist rhetoric and praxis, particularly women’s use of the costume to protest political issues such as the myriad abortion and women’s health restrictions that have been put forth and enacted in recent years in numerous states.

These uses of gendered frames seem to follow a broader pattern of radical-right appropriations of existing cultural phenomena in online contexts. This may be in part because radical-right participation in these “reopen” protests are promoted through online media, thus drawing in protesters more versed in online strategies and tactics. They also highlight several important facets of the way the radical right capitalizes on the meme-ification of appropriated culture for use in their “culture war.” As Ryan Milner has argued, it is easier to appropriate viral memes (and trends) than it is to make a meme (or trend) go viral. Such cultural appropriation has the added benefit of infuriating the opposition or “owning the libs” in contemporary radical-right online speech.

The “My Body, My Choice” slogan and the handmaid costume are used precisely because they will be noticed, photographed, discussed and spread. This juxtaposition of leftist visual markers to forward rightist arguments mobilizes anger on the left and identification on the right. Such appropriations also have the potential to evacuate the cultural meaning of these makers for the left. Even if they fail to break these symbols down — at a minimum — they still get “the lulz”: a good laugh at the expense of the “libs.” As such, this usage generates a win-win scenario in the culture war from the radical right’s perspective.

The rhetorical force of these gendered juxtapositions works in concert with common narratives of radical-right ideology. First, these appropriations support the protest’s positioning of government stay-at-home orders as an attempt to limit “civil rights” and “freedoms” by the leftist state (protests have occurred in states with Democratic governors at a nearly two-to-one rate). The rhetorical suggestion is that the state is failing to deal with the pandemic and is seeking to restore institutional control by controlling people’s physical movements. This aligns with radical-right narratives of societal collapse and civilizational decline.

Second, the link between institutional control and bodily control is made specifically by using the pro-choice slogan and the handmaid costume. This is because both are understood to represent (feminist) arguments against legislative and governmental attempts to limit women’s rights through control of their bodies.    Rhetorically, and in alignment with radical-right narratives, these gendered images suggest that the government is using legislative force to coerce the people to its will, forcing everyone to think and act alike and leaving no room for dissent or individual liberty. In this way, the juxtaposition of gendered symbols works to bolster radical-right claims that leftists — particularly feminists — are the “real” fascists, Nazis or totalitarians because they want to limit free thought, speech and action of conservatives.

Third, the connective thread between these two arguments — the collapse of society and the leftist (cultural Marxist) threat in radical-right and right-wing extremist discourses — is anti-feminism. Feminism is seen as a primary modality of the destruction of the West (white genocide) and the collapse of society. The appropriation of the feminist slogan to rightist aims and the use of the handmaid costume by a man furthers this common anti-feminist sentiment through a visual containment and control of feminist rhetorical objects. In addition, a man in a handmaid costume — the mark of women entirely under violent, physical control by the state — connects directly to the extreme radical-right conspiracy theories of feminism as a global governmental plot to control and emasculate (white) men through its visual connection to gendered slavery.

Gender and gendered discourses do not currently seem to be a focus of online discussions of ways radical-right groups might benefit from the coronavirus pandemic. However, the use of anti-government gendered narratives at COVID-19 protests that have been organized in part by radical-right groups is informative about the usefulness of gender as a frame for engagement. While an understanding of narrative framings around the pandemic will be shifting as events continue to unfold, these instances of appropriation underscore the utility of gendered narratives and discourses as a bridge between normative and extreme conservative cultures. 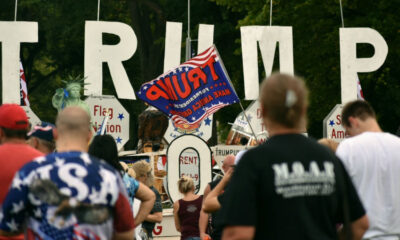 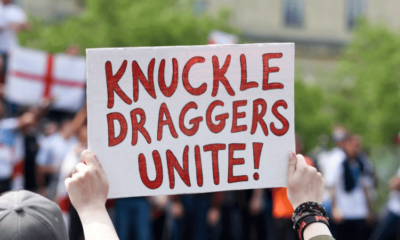