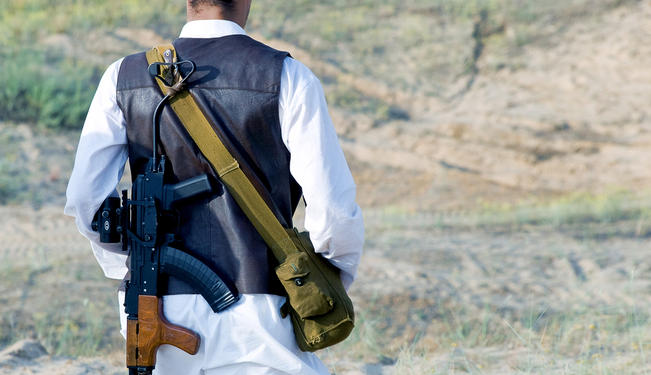 Is America inadvertently rearing another monster with its 'covert' support to al-Qaeda cadres in Syrian rebel ranks?

During World War II, the US Office of Strategic Services (OSS), predecessor to the Green Berets and in turn US Special Forces, utilized members of a German dissident group who had fled to France as refugees for unconventional operations against the German Army in conjunction with the OSS. The philosophy of the then OSS Chief General Donovan had been: “Use them as long as they kill Nazis.” This is no surprise when you look at special operations over the years. Use of irregulars, especially natives, by Special Forces has been common practice considering the tremendous advantages natives can provide in terms of language, terrain, customs, contacts and the like. In this particular case, perhaps these German dissidents had their own axe to grind against the Wehrmacht (Nazi Military); the very reason of their flight to France.

The difference that has occurred in recent decades is that instead of special operations of the above mentioned type that use irregulars in small numbers, nations have been engaged in creating en masse irregular armies to achieve their own objectives at national, regional or global levels. Ironically, conflict situations in recent years have proved without doubt that irregular forces even with ambiguous origins (so called non-state actors or shall we say ‘state sponsored’ non state actors) have come up with tremendous strategic advantage over conventional and even nuclear forces since the latter two type of forces are only used occasionally. The era of asymmetric wars has seen the proliferation of irregular forces.

Who the Taliban (meaning ‘students’ in Pashto) are is no secret; a movement created by Pakistan’s ISI and military from thoroughly radicalized so called ‘students’ brainwashed in distorted version of Islam, egged on and funded by the USA to overthrow the Soviet Regime in Afghanistan. Under Pakistani tutelage, the Taliban was spearheaded by the radical trio Mullah Omar (the Kandhar-based spiritual leader who headed the Taliban regime in Afghanistan), Sami-ul-Haq (a native of Khyber Pakhtunwala known as the “Father of Taliban”) and Fazal-ur-Rehman (a right-wing politician and Pakistani cleric). The Taliban ruled over Afghanistan from September 1996 to October 2001 establishing the Islamic Emirates of Afghanistan, gaining recognition from Pakistan, Saudi Arabia and the UAE. In doing so, USA created Frankenstein I that ravaged Afghanistan for a full decade and eventually the US had to launch an invasion to evict them.

Whether the overall strategy of the US in creating the Taliban was a ploy to establish its presence in Afghanistan remains highly debatable. However, it posed a critical question before the Afghan nation. If the purpose of the US-led military campaign in Afghanistan was to launch a ‘war against terror’ then why Washington did not invade Pakistan, the perennial source of terror rather than resort to mere drone strikes and eventually hunting down Osama-bin-Laden in Pakistan, which all told amounted only to scratching the surface? Afghani scholar Ahmed Rashid estimates that nearly 80,000 to 100,000 Pakistanis fought in Afghanistan alongside the Taliban between 1994 and 1999. And at the time of the US invasion in 2001, the number was still as high as 30,000. It is also no secret that the US facilitated the air evacuation from Kunduz and Khost of hundreds of Pakistani Military and ISI officers disguised as Taliban fighting the Northern Alliance at the time of the US invasion. Subsequently, the glaring irony all along has been that the US has been battling forces in Afghanistan sponsored by Islamabad, with the leverage still remaining with Pakistan. According to the United Nations, Taliban and its allies were responsible for 75 percent of the Afghan civilian casualties in 2010 and 80 percent during 2011. The Taliban assassinated former Afghan president Burhanuddin Rabbani in 2011 and it is also known that the radical group maintains a 40-man strong ISI trained undercover body called "Jihad Kandahar" in Afghanistan to carry out covert acts including assassinations.

The bigger irony is that Frankenstein I (Taliban) actually created by the US has acquired unquenchable thirst for American blood and yet there has been talk of the ‘good’ Taliban and ‘bad.’ The extremist group shares the same radical ideology as the Haqqani network and globally more notorious Al-Qaeda – all of which support the idea of establishing a pan-Islamic caliphate under strict Shariah rule. Given their aspirations, expecting them to join a democratic coalition government in Afghanistan will be nothing but a far-fetched imagination.

Paul Joseph Watson, the editor of prisonplanet.com recently wrote that just as Al-Qaeda terrorists were used to oust Gaddafi, hundreds of Libyan rebels with al-Qaeda members were being airlifted into Syria to mount attacks against the government forces.

Washington’s veiled support to and acceptance of al-Qaeda cadres, even if indirect, draws parallel with its World War II tactics of utilizing German dissidents to hunt down the Nazis. However, such a policy will have serious ramifications with strategic dimensions. Hounded by the US and NATO in Afghanistan and Pakistan, the al- Qaeda has been desperately trying to find new breeding grounds. To that end, it is slowly finding success in establishing network in Somalia, Sahel region and now Mali while still keeping an eye for new bases in the Arabian Peninsula. Paradoxically, in its eagerness to accelerate the Arab Spring and catalyse ‘regime change’, the US is advertently or inadvertently aiding the al-Qaeda to re-embed in the Arabian Peninsula and unleashing Frankenstein II in the process. For how long the US mainland will remain safe from these monsters is a matter of conjecture, and which only time will tell. The blind men need to take note.