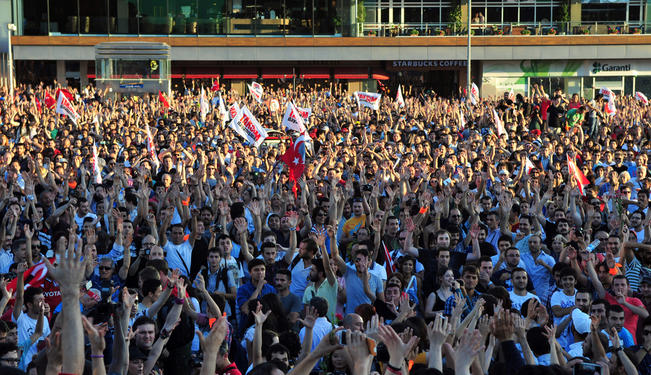 For the 50 percent who didn't vote for Turkey's Erdogan, protests have been the only alternative. This is the last of a two part series. Read part one here.

Demonstrations Outside the Gezi Park

It was mostly the elderly, who cooked at home and brought food to protesters in Gezi Park. Some bus and taxi drivers blocked the streets, delaying the intervention of police vehicles. Artists, singers, and actors visited the are. However, there were some restaurants or cafes like Starbucks, which closed their doors to protesters. Some of them preferred serving food and tea to the police. These were announced by name on social media. Though not accepted by the protesters, a few apologised.

Gezi Park was at the heart of demonstrations, but there were other parks, squares, or streets in different towns which saw protests too.

Every day at 9pm, those who were at home flashed their lights, banged pots from balconies or windows, cars drove through the streets honking, people walked together with their neighbours for a few blocks, chanting. They carried Atatürk posters and national flags or soccer team flags (usually, fans carry a rival’s flag). Turkish flags or Atatürk posters were hung from windows.

After the Gezi Park crackdown, which led to an increase in police detentions, a new way of protest was discovered: the standing man. At certain hours, wherever protesters are, they stand in silence.

People who are against Recep Tayyip Erdogan’s rule show their reactions in every possible case. The world-famous composer and pianist, Fazil Say, banged pots after a performance in support of demonstrators; and some singers cancelled their concerts, while other musicians donned t-shirts in support of Gezi Park protesters when they appeared on television.

According to religious and nationalist fanatics, and Erdogan, protesters were mostly atheists who were attacking mosques and women with Islamic headscarves. Non-Muslims, non-practicing Muslims, people from other faiths, and atheists expected such assaults and they took precautions. Starting from the first day, May 31, those “non-believers” encircled the Friday prayers to protect worshippers from police intervention.

People were able to perform their rituals or pray under the protection of “non-believers”. Protesters immediately stopped chanting when the call to the prayer from mosques began. On the Islamic holy night of Kandil, there was no loud music or alcohol. Instead, special bagels, which are only cooked on such holy nights, were served for free with tea.

What is mostly missed by foreign media is the respect, tolerance, sharing, art, humour, understanding, and love that protesters tried to spread around.

Excessive Use of Force: Police Terror

What triggered the spread of demonstrations were not the plans to destroy the park, but rather it was the brutal intervention of police. Police allegedly set tents in the park on fire, without even looking inside to see if they were occupied. This was the first violent police action, which was then followed by pepper spray, plastic bullets, and the firing of tear gas into stores, apartments, metro stations, and hotels. Police threw canisters from a dangerously close distance that some people were killed. One night, police threw gas bombs into the infirmary tent at the park which, under normal conditions, could be considered a war crime.

There were also reports that chemicals were used on protesters. According to these allegations, which are not proved yet, some of the gases involved agent orange and pressurized water containing unknown chemicals. Protesters showed signs of the use of chemicals, like skin irritation, burnt skin, and some allergies; though there are no laboratory analyses.

On the other hand, there were some groups of people holding large sticks, near police. They were filmed via amateur footage as they destroyed shops and cars or beat protesters. Their images were widely shared on social media and authorities admitted that they were plain clothes police officers.

There is still no information over whether provocateurs were captured or appeared in court. On the same day that provocateurs clashed with police, protesters behaved in a very clever way. They held hands and made up a chain of people between provocateurs and police. The aim was to protect the police from Molotov cocktails. The move not only shocked but also puzzled both the police and the provocateurs.

Islamization of the Police Department

There has been a debate about the police service for a decade. As it was difficult to make inroads into the military, those who wanted to join the armed forces chose the police department as an alternative. Before they acquired power, Islamic fundamentalists were discussing whether replacing the secular system with Sharia should be bloody or not. In other words, it was known that a regime change would involve the use of violence, which would make it necessary to be armed. Since the military is the main guardian of the secular system, it was very difficult to seize weapons.

The relationship between Islamist leader Fethullah Gulen and the police department are also important for this analysis. Gulen’s community has now infiltrated the police department. That is perhaps the main reason behind the lack of intervention with regards to violence against women. Turkish citizens still haven't forgotten the scene of a man stabbing his wife eight times while police were watching.

This change in the police force was noticeable once again through their violent intervention in the Gezi Park protests. Turkish citizens have lost their trust in the country's police.

It should also be noted that Rize, the town Erdogan’s family emigrated from, almost became the scene of a Madimak-like event. In 1993, 33 intellectuals and artists, mostly Alevis, were burnt to death at the Madimak Hotel in Sivas. The case against the perperators was dropped last year by the Ankara High Criminal Court. Furthermore, around 30 of the defendants’ lawyers were either deputies of the AKP or were brought into high positions by the ruling party.

In Rize, protesters were nearly lynched by AKP supporters. Fortunately, they were able to hide in an office. Police guarded the building but did not brutally intervene against the aggressors. The real scandal followed after the arrival of the Rize’s AKP mayor. In the shocking videos, it was evident that the mayor and the aggressors had long been friends, warmly joking with one another.The incidents were interpreted as a “trial for the second Madimak”. Moreover, assailants who attacked protesters were not taken into custody. In contrast, there were hundreds of Gezi Park protesters illegally taken into police custody. According to Article 34 of the Turkish constitution, “everyone has the right to hold unarmed and peaceful meetings and demonstration marches without prior permission,” which means that such arrests are illegal.

It is almost impossible to see the truth with government-controlled media. It is only small scale television channels and international press that can report the realities. Deputy Prime Minister Bülent Arınç declared that there was disinformation in the international media, while Turkish media had a sense of journalism. Furthermore, the Radio and Television Supreme Council fined several independent television channels which broadcasted and gave support to the protests.

During demonstrations, 3G connections for cell phones were cut in the parks, squares, streets. The role of Twitter, Facebook, and Android phones is cardinal when the media is almost fully under government control. Turks now rely on Twitter and Facebook as the main source of news.

Private wi-fi owners either shared their passwords or removed their network security keys to allow protesters to communicate via social media. Police took around 50 protesters into custody because tweets “spark[ed] anti-government sentiments, [spread] untrue information, declar[ed] the location of police, or nam[ed] the places where there [were] no police [forces],” according to authorities.

Protesters: Police are Still Their Brothers

After all this police brutality, protesters encouraged one another to stay away from violence, to remain calm, and to never see the police as an enemy. When protesters had the opportunity to get close to the police, they gave flowers and candy. Protesters, in fact, wrote letters to the police which were published on the internet, empathizing with them, and showing respect for their jobs. But demonstrators called on the police to show mercy when firing gas bombs or water cannons. It is crystal clear that the moment police arrived and intervened in the area, protests lost their charm. However, Erdogan insisted on keeping police on the streets, and defended the arbitrary activities.

The 50 percent who didn't vote for Erdogan have been highly ignored and disrespected for more than a decade. However, Erdogan remains defiant: “I gave the order to clean Gezi Park, it will not be a base for illegal organisations anymore. Now my citizens will promenade in the park.”