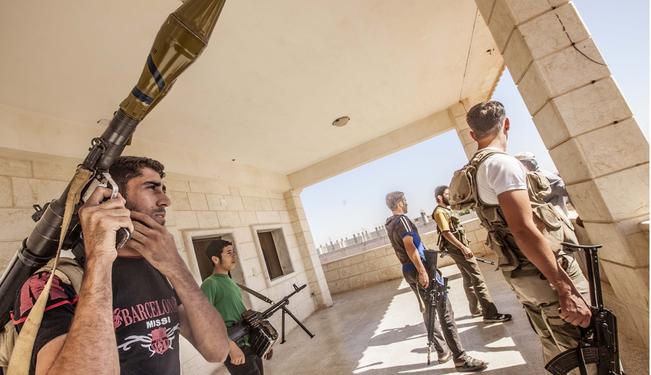 The Syrian war is not simply a magnet for extremists.

I was at a wedding not long ago of two dear female friends. The ceremony mixed together various religious traditions, including a Quaker meeting where people in the audience could stand up and speak spontaneously. After a number of people had already spoken, an old man made his way to the front of the space. He beckoned the two brides to approach. He put his hands on their heads and blessed their union in Hebrew. Even for a diehard secular like me, it was a moving moment.

The next day, over a brunch of smoked fish, I discovered that the old man was an uncle of one of the brides and also a rabbi. We got to talking about Eastern Europe and Israel and World War II.

Suddenly he said to me: “Does the name Vladimir Jabotinsky mean anything to you?”

“He was the founder of the Irgun.”

The Irgun was a right-wing Jewish underground military organization that became infamous under Menachem Begin’s leadership for its attack on the King David Hotel in 1946, which killed 91 people. The British government, which controlled Palestine at the time, considered Irgun a terrorist organization.

“Jabotinsky was an enthralling speaker,” the old man told me. “I heard him speak for two hours straight at Madison Square Garden in front of a huge crowd. I was a member of Betar, the youth group affiliated with Irgun. We had a training camp in the Catskills. Jabotinsky came to visit us. And that’s where he had a heart attack and died.”

Betar was so right-wing that for a time it adopted black uniforms in honor of Mussolini and fascism. “There were some fascists in our group,” the old man told me. “This was before it became clear what Hitler was doing.” And for some at the time, Irgun was not sufficiently militant. The Stern Gang, also known as Lehi, split from the Irgun in 1940. It tried to ally with the Nazis to fight the British and then later attempted a marriage between Bolshevism and religious fervor.

Irgun and Betar did not just run terrorist training camps in the Catskills. Before the Nazi invasion, the Polish government, too, was providing training and support for the Irgun in the hopes that a Jewish victory in Palestine would spur mass emigration.

It is instructive to remember this time in history when American and Polish Jews were eager to grab their guns and join a struggle in the Middle East. Some were motivated by religion. Some wanted to fight against a colonial occupier. Some wanted to establish a secular Jewish state. It was a messy situation on the ground, with many different actors.

It was still messy after 1948. Even after the birth of Israel, some Jewish terrorist activities continued. As Israeli scholars Ami Pedahzur and Arie Perliger write in their book, Jewish Terrorism in Israel:

“Most Jewish terrorist incidents that took place after the establishment of the State of Israel were the work of social networks consisting of former Lehi members[,] who rejected the social democratic characteristics of the new state and adhered to a combination of religious and nationalistic views.”

In other words, terrorists and other extremists helped create the modern state of Israel and continued to operate even after that state came into existence. Many modern states have similarly messy origins, though they try hard to conceal the more unpleasant aspects.

I thought about the story the old rabbi told me of his days of radicalism when I was reading a recent article in The Washington Post about a young Macedonian boy, who ran away from his family in Germany to fight in Syria. His family was shocked at the son’s turn toward greater religious orthodoxy, and even more taken aback when he hopped on a flight to Turkey with several of his coevals.

“The group was part of an increasing number of European Muslims seeking to fight in the Syrian Civil War alongside extremist groups, some of them linked to al-Qaeda,” the Post article reads. “And security officials worry that some of these volunteers will return radicalized and determined to strike in Europe.”

True, there are al-Qaeda-linked extremists fighting the Syrian government. But the opposition is diverse. In fact, according to the BBC, there are as many as 1,000 armed opposition groups mobilizing 100,000 fighters. And “some” volunteers will return to strike in Europe? Well, anything is possible. After all, the Jewish Defense League did commit terrorist acts in the United States, and some of its members had been radicalized in Israel.

Still, we tend to view all the Jews who went to fight for the creation of Israel according to a heroic narrative. Some of these “terrorists” even became world leaders, like Menachem Begin. As for those who go to fight in Syria, we tend to view them according to a narrative of marginalization. These fighters will be pushed further and further to the political extremes until they, like some of the mujahideen before them, turn into the ideological offspring of Osama bin Laden.

The Macedonian family in Germany arranged for their son to be kidnapped in Turkey and sent home. He was, after all, only 16-years-old. If it had been my kid, I had probably have gone to Turkey and kidnapped him myself to bring him home. I have nothing but empathy for this family.

But I am not so quick to assume that every Muslim traveling from Europe to Syria is suddenly an al-Qaeda recruit. First of all, despite some alarmist headlines, the numbers are rather low: a hundred from France, a couple hundred from Britain. And as French Interior Minister Manuel Valls said in response to a call to detain returning fighters: “The difficulty is that they are going to fight a regime that we oppose ourselves. Some are fighting with official opposition groups. Others end up with jihadist groups that are listed as terrorist organizations.”

A Desire To Help

As in the 1940s in Palestine, some recruits have gone to Syria motivated by extremist ideologies and with the intention to commit acts of terrorism. But most have more prosaic reasons for fighting. When asked why some Australians are traveling halfway around the world to fight in Syria, Will Plowright, a visiting fellow at the University of Melbourne’s School of Social and Political Science, replied: “Many people think that they have maybe been somehow brainwashed by jihadist propaganda, but that usually is not the case. They are more often motivated by a desire… to help people who are suffering.”

I wish the non-violent movement in Syria had succeeded in displacing Bashar al-Assad. I wish that this struggle against a dictator had not devolved into a bloody civil war and a transnational conflict. I have my doubts about what will come out of the current struggle. But I also resist the narrative of the Syrian war as simply a magnet for extremists.

Perhaps, like George Orwell in Catalonia during the Spanish Civil War, some of those who go to fight in Syria will be cured of their fondness for what Orwell called “smelly little orthodoxies.” Who knows, one of the veterans of this conflict might even step forward at a same-sex wedding in the distant future to offer a prayer in Arabic for the happy couple. Stranger things have happened.

[This article was originally published by Foreign Policy in Focus.]