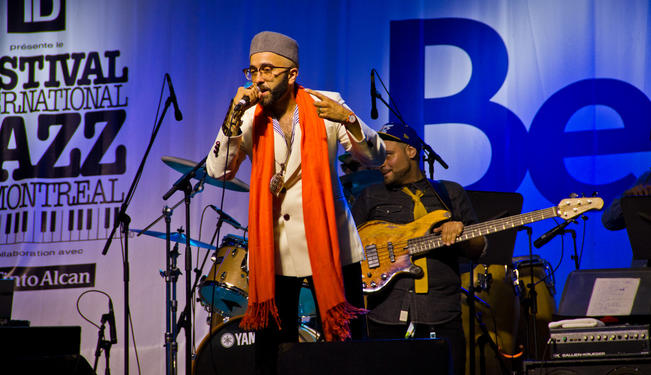 Megan Bénéat-Donald in conversation with Iraqi-Canadian musician, The Narcicyst. This is the last of a two part series. Read part one.

Bénéat-Donald: Your multilayered identity as an Iraqi/Arab/Canadian musician makes your perspective unique in contrast to those of other artists in the mainstream hip-hop industry. How would you say you differ from other similar artists in this respect?

The Narcicyst: I think not being from America is one thing that differentiates me. As much as Canada and the US are similar, I am able to look down (pun intended) and see the realities that we share, as well as the injustices projected eastwards from this side of the world. I am critical of both sides of my identity, because I feel accepted and rejected by both. I am able to grow. The one conversation that keeps coming up – whether it be with my wife, my musical comrades, or visual artists like El Seed – is that our story is being written as we go. We don’t have a template, we don’t have a plan, and we don’t have an idea of what our identity will be in 10-20 years. Whereas African-American MCs have an experience they can reference, we are in that initial phase as MCs trying to find our voice.

My personal viewpoint also differs because of my Iraqi heritage, experience, and what has happened to my country. I am not as mythological about the possibility of so-called "freedom" or "change", as they have been didactically presented to us in the events of the "Arab Spring" in the last couple of years. A lot of the other Arab rappers found solace in making music about the "now", and how freedom could be achieved through standing up to the "old ways" — whereas in Iraq, people were not even given the opportunity for that to happen. Whether that would have really made a difference to where Iraq is now is not what I am questioning, but I hold a certain skepticism that most other rappers don’t present. If you listen to my verses on any of the so-called "revolutionary" songs that were recorded during the Arab Spring, I am never too hopeful – I am always on the fence. I am there to support you, but also to ask the important questions we want to ignore. Look at the children of Iraq, how they have suffered, and how the world has forgotten them. Who is to say the world won’t do the same to Syria, Egypt, Libya, Tunisia, etc? We turn a blind eye really quickly, and tend to not even see ourselves anymore in the process.

Bénéat-Donald: Many MCs talk about a divide between "old-school hip-hop" and "hip-pop". What is your vision of old-school Arabic hip-hop as a platform for critical discourse and cultural innovation, as compared to a commercial notion of Arabic hip-pop?

Arabic hip-pop skipped a lot in its infancy. We went from making really raw underground political music to seeing hip-hop cultural typography, dance, production, and lyrics in major brand advertisements in the Middle East. You saw a breaker in a Pepsi ad and rappers on talent shows, and it all happened within the first ten years of the movement. Whereas with the birth and implosion of hip-hop in America, it took a while to reach that mainstream appeal; with us, it just went straight to the mockery of the realities we were singing about. On one hand, it’s a gift that can be exploited if we play our cards right. On the other, the commodification of hip-hop culture helps further stigmatise the importance of this burgeoning youth culture into a "box" that our parents’ generation can see as a fad. It had lost its power before it could even gain it in the region, so I am a bit worried about where it might be going. Hip-hop is a chameleon culture, so anything can happen.

Bénéat-Donald: What is your take on the various hip-hop movements throughout the MENA region as opposed to those in North America?

The Narcicyst: I think it’s beautiful. As you might know, the "Arab" voice, or the North African one, to be more specific, has been present in France and Europe for a very long time. Musically, [North Africans] represented us way before the representative forces from within the Arab world really took a stance — musically. Most of the output from [the Middle East] was pop-centric until the last five years or so. Lebanon has one of the most diverse scenes, but it suffers from the same sort of strife the country itself does. There is a lack of opportunity to go around, so you feel like people are scrambling, but the music is solid and diverse, the voices are awesome, and the production is different. Jordan, with Immortal Entertainment and the crew around them, is bringing out some of the most poignant and solid music, art, and cultural "products" I’ve seen. Once again, it’s a small scene and it’s hard to create a regional buzz and growing economy from it. Palestine probably has the fastest-growing hip-hop scene – they’ve brought us DAM and Ramallah Underground, for example. There, again, you see the same problems that plague the country. Most of the time, you feel as though the promoters don’t know how to market the music as anything other than Palestinian hip-hop, which in the long run might hurt the scene, and more personally, the artists. The Gulf’s hip-hop scene is diverse in DJs and representatives, and the talent is slowly emerging, but it’s still in its infancy, in my opinion. Out of Iraq and Syria you see factions of groups and MCs coming out, but nothing has really "penetrated" the scene. It’s growing, to put it briefly.

The similarity is that Arabic hip-hop is like [North-American] hip-hop was in the late 80s. We are slowly finding our voice out here, and bridging the gap. The differences are the fact that we have censors in the Arab world, and that the culture is imported, as opposed to exported, so we have to develop our own version [of hip-hop] before it becomes "credible". Our visual artists and beat-makers are miles ahead of us because, although words can hold us back, visuals and sonic work speak volumes to the soul and the mind. We have to catch up.

Bénéat-Donald: What would you say are the new and emerging themes in your current work, and why are they important to you now?

The Narcicyst: Life, love, hope, growth, change, and oneself. My music touches on issues that are more about how to break the shell or box of who we were, and who we are becoming is more of a story now. I am a strong believer in narratives, and it is up to us to create our own narratives as opposed to counter-narratives for those who exist around us. It is important to me, because I think it’s very much [in line with] where we are as adults and new citizens of the world. It is our time as Arabs. We are the next cultural byproducts of war to be realised as a part of society. People will have no choice but to see our achievements and contributions to humanity, society, and civilisation. Arab will be the new cool. When I tweet "Arab women are the future", I mean that in every way. You will start seeing more Arab writers, models, artists, singers, and actors. I really believe that it’s bigger than just being Arab – it’s about being the new citizen of the world – something that is evolving in many societies all over the world. How many children of immigrants do you know who have lived in several cities across the world, and don’t identify with only one place?

Bénéat-Donald: Your latest album, Leap of Faith, touches on many different topics, such as the commercialisation of creativity, racism, stereotyping, and belief in oneself. Did your recent move back to Dubai inspire some of these themes?

The Narcicyst: Very much so. I moved out here with my lady to start a new life. I took a leap of faith in a way, and moved everything with us. Things didn’t turn out as I wanted them to, and it was a test of my faith and patience. I did this project not only to unload my feelings of doubt, but also to create a clear idea of where I was, and where I was going as an artist. I sang, recorded, and wrote [the album], and mixed it all at my parents’ house, where I first started making music. It was not only a homecoming, but also a way to "break" my nest and shell and find a new voice. Life is grand.

Bénéat-Donald: What is your vision for the future? Are there any specific themes or subjects you would like to tackle that haven’t yet been explored in your work thus far?

The Narcicyst: I’m working on some film concepts. I really like the visual medium. I am hoping to establish my company with all the artists I know in Canada and the Arab world to create collaborative projects like Arab Winter. It is my passion to bring people together and create a sense of community and idea building beyond music. I am also working on my new album, trying to reach new creative heights with the same producers I’ve always worked with. Up and up!

*[This article was originally published by REORIENT.]