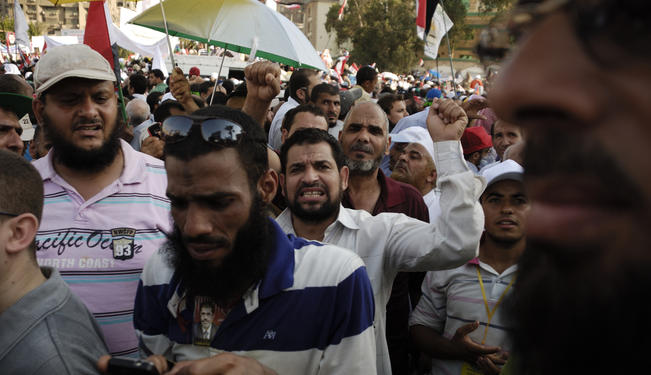 Entering negotiations is the most likely scenario for the Muslim Brotherhood.

The removal of President Mohammed Morsi and the crackdown on the Muslim Brotherhood (MB) has raised many questions concerning the future of the movement in Egypt, given that it had worked since the 1970s to try to engineer itself at the top of the political system. Below is a set of possible scenarios:

In determining the most likely possibility, it is important to understand the nature of the MB. The Brotherhood has been a pragmatic movement for decades, sacrificing ideology for political power, leading it to compromise and change political positions on many occasions. There has been a strong current in the movement since the leadership of Umar Tilemansi in the 1970s that aimed to create a new space for the movement in Egypt after the oppression under Nasser.

Taking this into consideration, it is unlikely that the MB is to continue with its current position of resisting the military and interim government through calls of demonstrations, protests, and sit-ins throughout the country, as this will be a massive obstacle to the pragmatic objectives of the movement. History has shown that when the Brotherhood has faced intense heat from the military, it has backed down — as in the 1950s and the 1990s.

The MB has been secularized over decades of pragmatism, and even Essam al-Erian, a leading member in the movement and spokesman, has previously called on the movement to strip itself of its Islamic agenda and adopt a more democratic model to further its goals in Egypt. This means that the Brotherhood has been accustomed to a democratic and secular discourse, making it unrealistic for it to switch to a more Islamic agenda of calling for a caliphate in Egypt, something that might appeal with its rank and file members.

In 2012, some of the Brotherhood's youth rebelled against the secular discourse and created a Facebook campaign to champion the cause of a caliphate in Egypt. However, the leadership quickly removed them from the movement and distanced itself from such a narrative. Given this tendency of the movement to disassociate itself from Islamic politics for pragmatic political and short-term objectives, it is unlikely that the MB leadership will completely shift its narrative and discourse, especially since it has become part of the political secular narrative in Egypt.

Entering Negotiations, the Most Likely Scenario

The most likely scenario, which would be consistent with the MB’s history, is for the movement to enter a dialogue with the military and interim government to achieve some type of political salvation for itself in Egypt. The MB is a Machiavellian movement that has become driven over decades by pragmatic principles and it is unlikely to change course now. There must be some head crunching at the leadership level to decide when it is best for the movement to enter such an alliance and what to demand from any negotiations.

The National Salvation Front (NSF) has made it very clear that the MB can contest future elections, but will not be allowed to have the presidency until it proves itself, which is quite ironic given that the MB’s involvement in syndicates and parliament since the 1980s is evidence and proof of its commitment to democracy and secularism in Egypt. Nevertheless, it seems that the secular opposition is not content with this and wants more compromises from the movement.

The Muslim Brotherhood Under Pressure

There is pressure on the MB from its other branches in the Middle East to enter negotiations as its alienation will have regional impacts, with other Arab leaders seeing an opportunity to dispense of their prostitution relationship with the Brotherhood. In Jordan, for example, the monarchy used the MB to counter other Islamic parties such as Hizb ut-Tahrir and to give itself an Islamic image in return for seats within the ineffective Jordanian parliament.

This is the only option for the MB if it follows its pragmatic method, which is no different to its past. At this moment, however, its bargaining position is weaker than before, as under Hosni Mubarak the Brotherhood was the only opposition. Today, in the post-Mubarak Egypt, other movements have emerged, including the NSF that has much financial backing and media support, allowing it to project itself across Egypt with greater leverage in its possible future negotiations with the MB.

This is a critical juncture for the Brotherhood and it needs to think hard about its role in Egypt. Does it want to be seen as a movement that keeps going back for more, even though the military has made its position very clear? Or does the MB want to bring real change to Egypt that would inevitably involve some sort of clash with the existing military and political class?

The saying in Egypt is that the revolution is not dead. This is evident, but the question that the Brotherhood needs to answer is whether it wants to be part of this revolution and fight for a just end rather than being manipulated — which it undoubtedly will be given that the previous regimes have been successful in manipulating and co-opting the opposition into the existing military-dominated political system.

*[Note: An earlier version of this article was published on New Civilisation.]