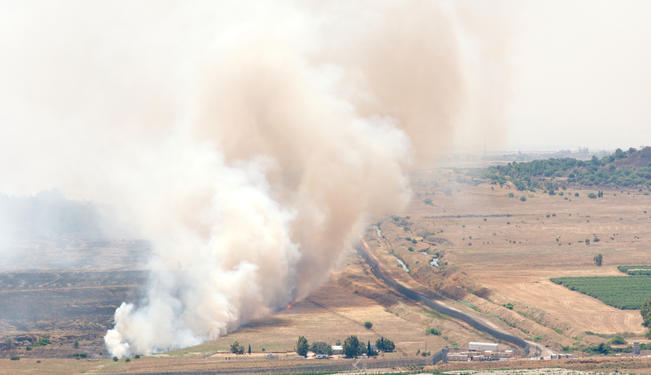 The proposed US-led military action against the Syrian military, in response to allegations that the Bashar al-Assad government authorized the use of chemical weapons against civilian targets in the Ghouta suburb of Damascus, is being reported as likely to occur within the next few days. Leading members of the Syrian opposition in Turkey have stated to international news media that the United States and several of its allies – with the United Kingdom, France, and Turkey being the most vocal opponents of the Syrian government – are expected to support the execution of military strikes against regime targets in Syria. The Arab League, which removed the Syrian government from its organization in 2012, blames the al-Assad regime for using chemical weapons, but does not approve of military strikes. The Syrian opposition leadership states that it expects to see the collapse of the al-Assad government, or its willingness to engage in a transition.

While at this point it is unclear exactly as to what type of military intervention would occur, it is reported that the most likely method would be missile strikes launched from US Naval destroyers, currently located in the eastern Mediterranean. The most likely targets would be Syrian military units in and around Damascus, including an air and missile base, and the headquarters of the elite 4th Mechanized Division, which is believed to be personally led by al-Assad’s younger brother, Maher.

For its part, the Syrian government has warned that it will “surprise” any nation that attacks it, leading to speculation that a wider conflict could be in the offing.

A crucial context for these developments is the reality that the civil war in Syria has devolved to the point that deeply knowledgeable analysts are predicting a de facto partitioning of the country, combined with a long, twilight struggle that will have disastrous, bloody consequences for the Middle East.

Iran and Russia, long-standing supporters of the sovereignty of the al-Assad government, have both warned of this eventuality. Russia’s fellow United Nations Security Council member, China, is expressing strong reservations over military action against Syria, and the potential for even further degradation of the stability in the Middle East. Even European nations, such as Italy, have expressed reservations over military strikes against the Syrian military without United Nations approval, which is highly unlikely as both Russia and China oppose such a course of action.

Geopolitics aside, limited air strikes against Syrian military installations are not being touted by nations likely to participate in military action, such as the United States and United Kingdom, as a “game-changer” that will lead to the downfall of the Syrian government. Limited air strikes against military targets in highly strategic, contested areas in the Homs, Lattakia, and Idlib governorates could “tip” the scale of the local conflict in those regions just enough toward the armed opposition, that it would take the Syrian military and its adjunct forces quite some time to recover. In Idlib, air strikes against regime targets could finally dislodge the Syrian military from the city of Idlib, one of its last bastions of control in the area from which it has been slowly recovering from earlier rebel gains. This could potentially lead to the creation of a border zone “Free Syrian Republic,” where a provisional opposition government could be formed.

The Benefactors of Military Strikes

In all likelihood, however, the armed Syrian opposition groups that would most benefit from targeted strikes against front-line Syrian units would, in fact, be the militant Salafist groups, such as Jabhat al-Nusra and the Islamic State of Iraq and al-Sham (ISIS) — organizations that are viewed as the greatest long-term threats to a potential post-Assad Syria and to the US-led governments that might intervene. Elite Syrian military units, perhaps the most helpful targets in an effort to reverse the battle for the opposition, are often deployed against the most hardened of the militant Salafist fighters. Thus, from a realist perspective that views the militant Salafist fighting groups as the most dangerous enemy to Western interests in a post-Assad Syria, it would be potentially irresponsible for the intervening nations to heavily target Syrian forces that offer an effective “check” to this mutual enemy of al-Assad and the West.

Reports indicate that paramilitary forces — such as the National Defense Army (NDA) and its adjunct, government-organized and armed local defense forces, the Popular Committees — are also effective at fighting armed opposition groups. Drawn from local populations in conflict areas of the country, targeting these forces would be a logical step toward reducing the effectiveness of the Syrian military and hasten the end of the al-Assad government. However, targeting the NDA and the Popular Committees would be tantamount to attacking civilian populations, as both organizations tend to be located amongst a community that they defend; a morally questionable course of action.

Ultimately, US-led military strikes against Syrian military targets that are associated with the deployment of chemical weapons are unlikely to end the government of Bashar al-Assad, and are not intended to execute the death blow to his rule. US-led military strikes in Syria are also likely to be utilized by the Syrian government to strengthen its argument to the sections of the population, who are not supporting the opposition, that their country is under siege by a foreign conspiracy — thus further reinforcing the al-Assad government’s narrative of resistance against the designs of Syria’s bloodthirsty enemies. Short of a long-term campaign of military intervention from the US-led powers, or a change of heart amongst the Syrian communities that provide support to the al-Assad government and its enemies, Syria’s brutal civil war and human suffering will continue.