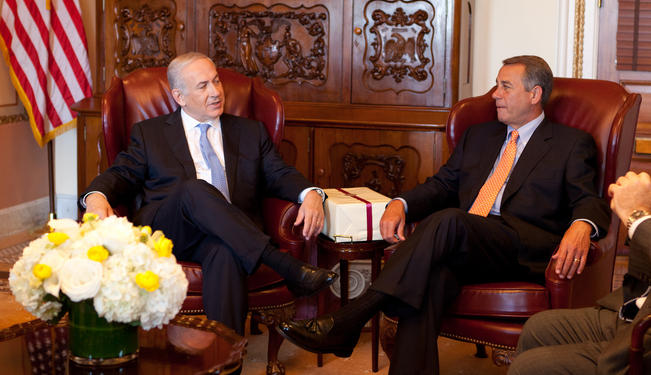 In an Israeli election devoid of significant policy disagreements, this year’s campaign season has served to further the dissolution of the left, while unifying the various “tribes” on the right.

In a few days, Israel will end what has been a sleepy campaign season. There is little doubt that the current government, led by Binyamin Netanyahu, will remain in power. No major policy issue, domestic or foreign, has galvanized debate between the parties. However, though little is happening at the macro level, fascinating changes are taking place within the individual parties. In general, we are witnessing the continued disintegration of the left, while the right diversifies and consolidates its support base. These changes are essentially an adjustment of the political system to more accurately represent Israeli public sentiment.

The decline of the Israeli left was inevitable. Since the establishment of the state, the left, dominated by the Labor Party, has consistently failed to attract every major wave of immigrants. In particular, it has little support among Israel’s Mizrahi (Oriental) and Russian populations, who make up the majority of the Jewish population. In the case of the former, the left is associated with the elitism and discrimination they faced as new immigrants in the 1940s and 50s. The latter are cautious of the left due to their experience with communism, and have a cultural preference for a strong, uncompromising leader. Perhaps as a result of this alienation, Israel’s minor parties are based on personal identity rather than ideology.

With regard to voting patterns, Mizrahi Jews tend to vote for either Likud or Shas, until recently the only religious party with a non-religious constituency. Jews from the Soviet Union tend to vote for Likud or Yisrael Beitenu. The kibbutzim are consistent supporters of Labor. Kadima took the dovish politicians from Likud, but its constituency consists of former Labor voters who became skeptical of the peace process. Meretz is the home of leftists disenchanted by Labor, generally stereotyped as financially secure Ashkenazim from Tel Aviv. The religious Ashkenazimvote for an ever-evolving constellation of Ashkenazi religious parties.

With ideology not at play, the only functional difference between the Israeli right and left over the past two decades has been the belief that peace with the Palestinians is possible. Parties representing the more pessimistic or cautious sectors of Israeli society are situated on the right. For example, Mizrahim, having themselves fled Arab lands, are skeptical of the Palestinians’ intentions. Similarly, the religious parties are unwilling to give up parts of the Biblical Land of Israel without absolute certainty that it will lead to peace.

Events over the past decade have eroded the optimism generated by the Oslo Accords. The left was already bruised in 2000 by Yasser Arafat’s refusal to negotiate on Ehud Barak’s offer of a state encompassing 94% of Palestinian territorial demands, which was followed almost immediately by the outbreak of the Second Intifada. When Israel’s complete withdrawal from Gaza in 2005 culminated in a month-long war over the persistent firing of Hamas rockets on civilians in 2008, the result was the total collapse of the left in the 2009 elections.

The anemic state of the left is evident in this year’s campaign. Kadima is arguing via billboards that an Iranian nuclear attack is inevitable under Netanyahu, but has not put forward a cogent statement on what should be done differently. Labor is running advertisements saying that Netanyahu benefits the rich, and party leader Shelly Yachimovich benefits everyone. This argument is undercut by the Netanyahu government’s rapid response to the social welfare protests that erupted in 2011, as well as the fact that Yachimovich earned many times the average Israeli salary working as a journalist. Tzipi Livni, technically a centrist, has argued that she will improve Israel’s standing in the international communityby negotiating with the Palestinians, while Netanyahu will wreck it. However, most Israelis do not accept her premise that negotiations ended because of Netanyahu, and they have never had much consideration for global opinion.

Beyond running ineffective campaigns, the parties of the left and center have actually been torn apart by the egos of their leaders. The first such case resulted from the decision by then-Labor Party head Ehud Barak to join the Netanyahu coalition, even though the right-wing nature of the future coalition was already evident. In response to objections within the party, he formed the breakaway Independence Party, splitting Labor in two. Tzipi Livni responded to being deposed as head of Kadima by forming another new party, Hatnuah. Journalist Yair Lapid also decided to form a new party, Yesh Atid, whose voters will entirely be drawn from other leftist parties. The left currently lacks a charismatic leader capable of reunifying the ranks.

While the left flounders, the parties on the right have been joining forces and diversifying their constituencies. Shas, the Mizrahi religious party, has run bus advertisements featuring Netanyahu and Yisrael Beitenu’s Avigdor Lieberman. Ironically, in the last election, Shas spiritual leader Ovadia Yosef declared voting for Yisrael Beitenu an “unforgivable sin.” At the same time, Netanyahu has given Mizrahi musical stars, including Sarit Hadad and Eyal Golan, front stage at his campaign events.

In another new development, The Jewish Home, which was founded in 2008 by the merger of three religious Zionist parties, has gained a momentum never seen before among the non-Mizrahi religious parties. Under the leadership of Naftali Bennett, The Jewish Home has sought to become a non-ethnic version of Shas – a religious party with broader appeal. Bennett, the son of immigrants from the United States, is also the first to mobilize the small, but relatively wealthy “Anglo” population of Israel.

The full ascendance of the right in Israeli politics will actually have little impact on Israeli policy. Social welfare is a popular cause on both the left and the right. The strongest supporters and opponents of military exemptions for the ultra-Orthodox are both found on the right, with Yisrael Beitenu leading the charge for mandatory service. On the issue of Iran, as in other military situations, Israeli policy will be guided by circumstances rather than supposed hawkishness. In fact, it should be noted that Israel’s first peace treaty was negotiated by a right-wing prime minister, whereas Yitzhak Rabin, Shimon Peres, and Ehud Barak all came to political prominence on the left as a result of their military service.

As for the peace process with the Palestinians, nothing is likely to change. For mainstream Israelis, the launching of rockets after the withdrawal from Gaza, the perpetual infighting between the Palestinian Authority and Hamas, and the statehood vote at the UN have all sent the message that the Palestinians are not willing or able to hold up their side of the “land for peace” equation. No Israeli government, right or left, would have the public support necessary to make the kinds of politically risky concessions to the Palestinians that Barak made in 2000 and Ariel Sharon in 2005. That skepticism is reflected in the collapse of the left.