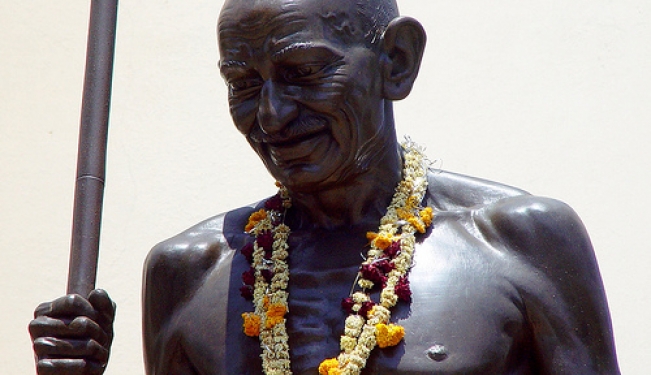 New Delhi has a golden opportunity to assist in supporting democratic regimes in the Arab World. It’s in its own interests to seize this chance.

The fall of Libya’s Muammar Gaddafi stands as the latest, most dramatic episode in the explosive changes roiling today’s Middle East. As Libyans—and their counterparts in Egypt, Tunisia, Yemen, and elsewhere—start down the difficult path of political change, India possesses a historic opportunity. In recognition of its growing global role and its status as the world’s largest democracy, India can play a unique role in supporting the democratic forces that have produced the Arab Spring.

Identifying ways to do so would recognize a central geopolitical fact of our time: New Delhi is increasingly drawn into decision-making in the world’s most critical regions. Earlier this year, India voted with the other great powers on the UN Security Council to sanction Libya following Colonel Gaddafi’s brutal crackdown. Millions of Indians in the Middle East today are literal witnesses to history as Arab publics agitate for the same freedoms Indians themselves enjoy. And New Delhi’s posture toward developments in countries like Syria and Iran are of increasing consequence for decision-makers and publics alike.

These developments position New Delhi to help shape the Middle East – home to five million Indian citizens and most of India’s energy supplies. India is in fact better placed to work with the people of the region than nearly any other power. As the Times of India has noted, recent events ‘present an opportunity to project New Delhi’s soft power, which is considerable in the region. (India) presents a working democratic model in a sociocultural environment far closer to the Gulf’s than Western democracies are—and with none of the political baggage of the latter.’

Officials have been understandably modest about India’s possible contribution to the Arab awakening. ‘(D)epending on how the situation develops, India will certainly try to position itself to be of advantage to forces of democracy so dear to India’s heart,’ says External Affairs Minister S.M. Krishna. But he remains cautious: ‘India does not believe in interfering in the affairs of another country. We will take the cue at an appropriate time depending on how they want India to help. India will be willing to be of some assistance to them. But let the situation arise.’

It would appear that the situation has indeed arisen. Secretary of State Hillary Clinton has raised the possibility of Indian support for upcoming elections in Egypt. Egypt’s Muslim Brotherhood, meanwhile, has approached India for help with conducting nationwide elections. Given India’s remarkable success in regularly organizing elections for hundreds of millions of its citizens, it’s uniquely positioned to provide this expertise.

But might this be only the beginning, rather than the sum total, of India’s efforts on behalf of Middle East democracy? After all, the non-interventionist tradition is a relic of the time when India was weak and poor. It seems ill-fitted to the foreign policy of a country increasingly strong and prosperous.

As demands for democratic change swell from Benghazi to Beijing, India’s liberal system gives it a unique strategic advantage that New Delhi should seize.

India today brands itself on the world stage as ‘the fastest growing free market democracy’—drawing a none-too-subtle distinction with its Chinese rival. Acting on this belief, India already has worked to strengthen democratic institutions in Nepal, Sri Lanka, Bangladesh, Bhutan, and, most prominently, Afghanistan.

India was one of ten founding members of the Community of Democracies and a leading co-founder of the UN Democracy Fund, dedicated to promoting good governance and human rights around the world. India has participated in the multilateral activities of the Center for Democratic Transitions, the Partnership for Democratic Governance, and the Asia-Pacific Democracy Partnership.

New Delhi hasn’t just a moral stake, but also a national interest in building on this record in the new Middle East. Egypt, Tunisia, Libya, Yemen, Syria, and the Gulf states will need to establish the institutions of good governance, from strong political parties to independent judiciaries. New Delhi’s advice and assistance would make these countries better homes for Indian workers, better allies in stabilizing a region of great strategic importance to India’s development, more reliable energy suppliers, and more prosperous trade and investment partners.

The crisis of governance in the Arab world also presents an opportunity to strengthen US-India ties. Whether working together with India or independently toward similar ends, the world’s largest democracies bring complementary strengths to the hard task of building a culture of democracy across the Arab world.

Arab publics are clamouring for reform. Supporting them isn’t a policy of regime change or the imposition of outside values. It is nothing more than pursuing at once our interests and our values.

This article was first published by The Diplomat on August 24, 2011.