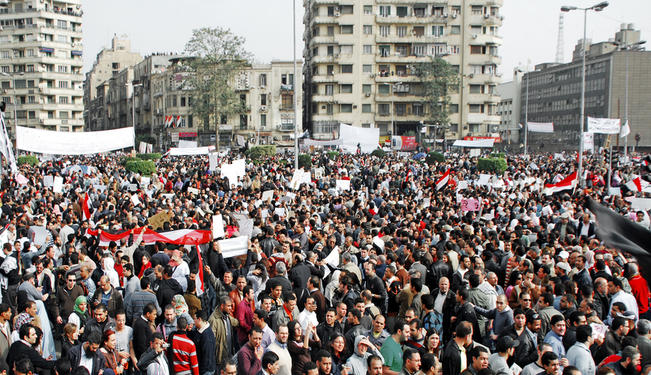 The Muslim Brotherhood failed to consolidate the power they obtained in 2011. [Note: This article was written and translated before recent events.]

Mohammed Morsi has his back against the wall. The mass protests, which are spreading across the country and the ultimatum given by the military leadership, could soon lead to a development in which the first freely elected president of Egypt will lose his office. Morsi’s own failure is also a failure of the Muslim Brotherhood, which is standing behind him. The group did not manage to consolidate the power it gained in 2011. Three central developments were crucial for this.

First, the Muslim Brotherhood neglected to open up to the population. After the fall of the Hosni Mubarak regime in 2011, the Brotherhood leadership attempted, through the founding of the Freedom and Justice Party (FJP), to transform its political arm into a catch-all party. Indeed, the FJP managed to organize a majority and to win elections. The reason was that the party, in contrast to other political parties in Egypt, had a good organizational structure. The FJP, however, did not turn into a catch-all party. Instead of integrating as many political factions as possible and having an open debate, party positions were mostly discussed within the Brotherhood’s leadership bureau, Maktab al-irshad. In this non-transparent executive board, a small group of ideologically like-minded “conservative pragmatists” who were part of the inner circle of Kheirat al-Shater, the deputy leader of the Brotherhood, kept things firmly in their hands.

Liberal-minded members of the Muslim Brotherhood, like Abdel Moneim Aboul Fotouh, who managed to achieve a decent result in the 2012 presidential election, have been successively pushed out of the governing body of the group. The lack of appreciation for transparency is also mirrored in Morsi’s governing style. The president often did not even try to explain his decisions to the population. This lack of willingness to communicate was coupled with an uncharismatic and largely unknown Morsi, until his election.

Failure to Unite the Islamist Camp

Second, the Muslim Brotherhood was unable to unite the Islamist spectrum in Egypt. The Brotherhood, like foreign observers, was caught by surprise by the political success of the Salafis. The Salafist al-Nour Party (Party of light) was clearly the second strongest force in Egypt with 22% of votes during the first free parliamentary elections in 2011. Ever since, the party has developed further and has increasingly set itself apart from the Brotherhood and the FJP.

Although it is more conservative regarding socio-political positions, al-Nour showed a greater willingness to engage with the opposition. The party did not participate in the mass demonstrations against Morsi, but stressed the legitimacy of the elected president. However, it unequivocally asked Morsi to set new elections and until then to form a technocratic cabinet. It remains to be seen whether this strategy will pay off for al-Nour. In any case, the Islamist camp is split because of this, and the Muslim Brotherhood will have a harder time portraying the calls for Morsi’s resignation as an attack against the “Islamic identity of the country” — a formula which they were able to successfully deploy in the past in order to mobilize for its goals.

Third, the Muslim Brotherhood was not successful in coming to an agreement with important state actors. They only managed to bring about a power-sharing agreement, apparently in the form of a “gentlemen’s agreement,” with the military leadership. The military accepted the civilian president and, in return, it was awarded significant autonomy through the new constitution, pushed through by the Muslim Brotherhood.

The Brotherhood leadership apparently believed naively that through the agreement with the military, it could gain control over other established state institutions, like the internal security services and the judiciary. This was not the case; although the media, often critical with respect to the Muslim Brotherhood, decried an “Ikhwanization,” an infiltration of institutions by the Brotherhood.

Due to a lack of control over the interior ministry, the organization did not manage to start an urgently needed reform of the security apparatus and to break the informal networks and structures of the Egyptian police. The judiciary laws proposed by the Muslim Brotherhood, such as a change in the electoral law, were successfully blocked.

In the coming days, we will see whether the Brotherhood leadership will own up to its political failure or whether it will risk a confrontation with large parts of the population, especially the military. This could be dependent on how successful the Brotherhood will be in mobilizing its members and supporters. On this point, it is completely unclear over how many supporters the Brotherhood can count on – information ranges from several hundred thousand to several million people. It is also unclear to what extent these supporters could be mobilized for nationwide demonstrations – or whether there will be internal resistance against the leadership’s policy. During the last several months, there have been repeated reports of criticism against the movement’s governing style, coming from within the Muslim Brotherhood. The organization’s internal cohesion could tip the scale.

*[This article was originally by Stiftung Wissenschaft und Politik (SWP), and translated from German to English by Manuel Langendorf.]