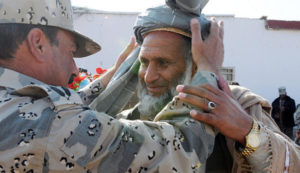 NANGARHAR PROVINCE, Afghanistan (Jan. 21, 2010) Afghan Border Police Col. Niazy, the commander of Nangarhar provinces ABP Zone one, presents Malik Usman with the longi, a traditional headdress symbolic of tribal leadership and adherence to Pashtunwali, during closing ceremonies at a tribal meeting held in eastern Afghanistans Nangarhar province, Jan. 21. Pashtunwali, the ancient code of honor for the Pashtun people, is a set of rules that guides both the individual and community and is thought to predate Islam. Maliks, or tribal leaders, from six districts attended the jirga, which hosted 170 village elders, who met to denounce the Taliban and corrupt governance. The jirga also involved the collective signing of an anti-Taliban Shinwari Pact, where local leaders promised to assist security forces in battling anti-Afghan forces.
We are now one tribe committed to a common cause, Niazy proclaimed. (Photo by U.S. Army Sgt. Tracy J. Smith, 48th Infantry Brigade Combat Team Public Affairs)