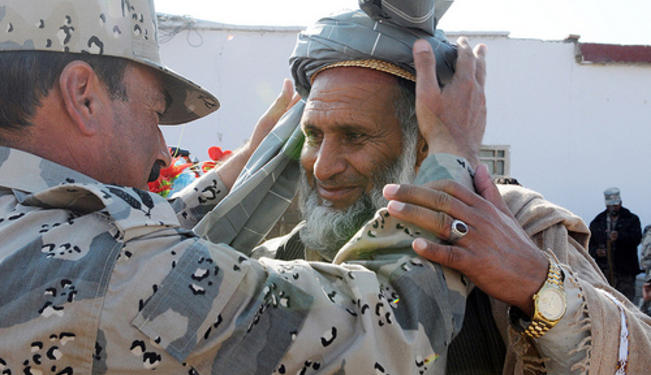 US success in Afghanistan requires a change in strategy.

Last week’s Bonn Conference was another lost opportunity to promote a genuine multilateral approach to Afghanistan. For the past decade, and especially after President Obama took office, the West has pinned its entire Afghan strategy on Pakistan.

Yet, despite spending US$ 386 billion and losses of 1,774 lives since 2001, America’s return on investment has been truly dismal. The reasons for this have been clear all along – America overinvested in Pakistan and underinvested in the rest of the region.

It is important to revisit why the West’s “Af-Pak” strategy collapsed and what is the best way forward.

To eradicate radicalism in Afghanistan and Pakistan, a purely counter-terrorism mission could not have worked, at least in the initial phase. In the tumultuous political setting in which state sovereignty has eroded over the decades, especially in the case of Pakistan’s borderlands – in which it was never established – neutralising terrorism requires some element of state building on both sides of the Durand Line. Thus, the Afghan question logically evolved into a counter-insurgency mission that could only be fulfilled via a limited nation-building project.

Yet, the massive boots required for such a strategy have not been deemed domestically sustainable in the West. This mismatch of ends and means led directly to the heart of the problem – adopting a counter-insurgency strategy that depended on the collaboration of Pakistani boots across the Durand Line. In this sense, the American geostrategy has clearly been Pakistan-centric.

The next challenge before the American planner was to persuade Pakistan to abandon its hedging strategy of supporting proxy militias on their western front. Normalising Pakistani threat perceptions, therefore, became a logical extension of the Afghan strategy.

How did the US respond to this reshaping of Pakistani threat perceptions? This involved cajoling India to reassure Pakistan. Here India’s restraint and reassurance has been stretched to the limit. Nevertheless, we have seen that reassurance that satisfies Pakistan, if taken to its logical conclusion, implies outright capitulation by its immediate neighbours. The US also directly reassured Pakistan by signalling a long-term commitment to address Pakistan’s fear of abandonment, and provided capacity-building support to help Pakistan help itself.

Changing Pakistan’s worldview and reconstruction of its identity, however, has proved impossible for three reasons.

First, lack of intent – Pakistan has been reluctant to fully cooperate with America to break the back of the insurgency. It hopes to retain some leverage via the Afghan Taliban not only for potential influence in Afghanistan but also in ensuring that Pakistan’s 27 million Pashtuns do not create a blowback for the Pakistani state. In fact, it is Pakistan’s Pashtun problem that is the principal driver for its “strategic depth” policies, which are then legitimised by the “India threat”.

Second, lack of capacity – an important assumption was that the Pakistani state, including its military, had the capacity and discipline to prosecute a counter-insurgency strategy, which to be politically useful must be followed up with an administrative absorption of the ungoverned frontier regions into the Pakistani state. Again, Pakistan has not demonstrated sovereign governance capabilities to “hold and build” western Pakistan. For all practical purposes, the writ of the Pakistani state does not extend beyond the Indus.

Third, an ideational paralysis – the objective of the permanently changing Pakistani calculus presumed that Pakistan’s fuedal elite could change course by dismantling its strategic reliance on radical Islam. And this in turn presumed that Pakistan would be able to substitute the diabolical use of Islam and ideologically reinvent itself as a normal nation-state with normal threat perceptions.

This was always a tall order because it implied an ambitious geopolitical reconstruction of the post-1947 subcontinent and body politic. Ironically, what the post-transition phase actually needs is a predictable transactional relationship between the US and Pakistan where all western aid is conditioned on sustained anti-terrorist measures by Pakistan against groups targeting the international community.

Now if a Pakistan-centric approach has reached a dead-end, we need to have a look at what can be done differently on the Afghan side of the equation.

First, western discourse focuses on breaking the link between Al-Qaida and the Taliban so that the latter can be accommodated in a power-sharing arrangement in Afghanistan. But to execute this top-down reconciliation strategy would require Pakistani intent, capacity, and real governance being extended to the tribal areas and the safe havens in western Pakistan. The prospect of this happening is structurally nearly impossible.

But what about pursuing an alternative strategy that can actually be implemented from within Afghanistan? Breaking the Pashtun link from the Taliban or at least de-legitimising the narrative that the Taliban factions are the sole voice for the Afghan Pashtun is something that has not been pursued seriously. The main reason for this is the US strategic establishment has held on to the optimistic scenario that Pakistan would ultimately emerge as an intermediary in a grand top-down bargain with the Taliban confederacy.

An Afghan state that possesses basic institutional capabilities supplemented with a wider patronage system and security for the southern and eastern Pashtuns can make it harder for the Taliban to sustain Pashtun allegiance, at least on the Afghan side of the Durand Line. So, instead of outsourcing the Pashtun problem to Pakistan, which in turn outsources it to radical proxies, rebalancing institutions within Afghanistan and giving them a pan-ethnic inclusive expression would help. Here rebalancing the ethnic composition of the Afghan National Security Forces to increase the share of Pashtuns would help in widening the legitimacy of the Afghan state.

Second, is to consider what can be done on the Afghan side of the Durand Line to promote Pakistani behaviour that is evidently in its self-interest.

A strong “anvil” on the Afghan side, including a robust intelligence, surveillance and defense on key border passes would imply that Pakistani inaction and intransigence over its Pashtun areas would hurt Pakistani interests more than Afghanistan. This is more likely to adapt Pakistani behaviour – become the “hammer” or face the prospect of getting even more destabilised itself. At the very least, this would produce a structural reaction rather than waiting for Pakistan to unilaterally change the way it deals with western Pakistan and its 27 million Pashtuns.

Finally, a sincere diplomatic effort at bringing Afghanistan’s other neighbours such as Russia and Iran into the equation offers an alternative path. Russia’s role in expanding the northern logistical route to Afghanistan as an alternative to the one from Karachi underscores that it has a stake in Afghan stability. Iran, which shares a 936-kilometre border with Afghanistan, too, has a vital interest in stability. According to the 2011 United Nations Drug Report, Iran has intercepted 89 per cent of all the seized opium worldwide on its eastern border. India’s modest but well-executed reconstruction effort has endeared it to all sections of Afghanistan. In sum, the region has provided more tacit and actual support to Afghan stability than is generally recognised.

America can leverage these national efforts, however provisional they might appear, to promote a common goal for Afghanistan. But before that, Washington needs to scale back its own geopolitical ambitions in southern Eurasia. A geopolitically neutral, ethnically inclusive, and a minimally capable Afghanistan that is neither a breeding ground for terrorism nor a potential power-projection base for the West would be acceptable to all regional stakeholders, including Pakistan. If such a vision for Afghanistan is pursued it would make intervention into Afghan affairs unnecessary and increase the prospects for a genuine multilateral commitment to Afghanistan’s future.

Even the original protagonists of the ‘great game’ – Russia and Great Britain – recognised the futility of an expensive and destabalising rivalry in Afghanistan. They ultimately called a truce in the Anglo-Russian Convention of 1907. Russia acceded to Afghanistan’s semi-neutral status as a British protectorate and in lieu received assurances that Afghanistan would not be used as a bridgehead to meddle in Central Asia. This arrangement kept the peace for nearly 70 years.

The 1979 Soviet invasion reopened the ‘great game’ by attempting to transform Afghanistan’s neutral status into a sphere of influence. It failed miserably. The US must learn the lessons of the past and craft a multilateral compact that brings all regional actors including its rivals on board with a common aim of ending the ‘great game’.