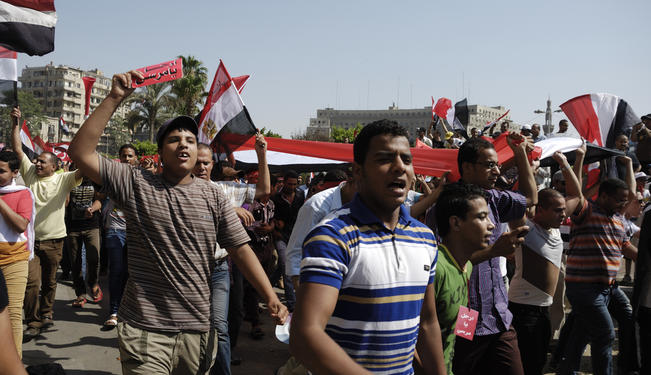 The Muslim Brotherhood must learn the art of compromise and forget their initial goals.

On June 24, 2012 Mohammed Morsi, a candidate from the Muslim Brotherhood, won Egypt’s first presidential election after the overthrow of Hosni Mubarak. On July 3, 2013, following the huge protest movement of June 30, the Egyptian military stepped in to oust him, suspend the constitution, and appoint Adly Mansour, chief justice of the Supreme Constitutional Court, as interim president until new elections can be held.

Many blame Morsi for the unhappy end of his short era. His critics argue that during the year he spent in office, the Egyptian people tried to convey their demands to him, time and time again. But Morsi failed to respond positively to those messages. Instead of being the president of all Egyptians, he remained confined to the Muslim Brotherhood's political goals which, in the end, doomed him.

Morsi’s opponents decry his inability to understand the spirit of the January 25 revolution. The Muslim Brothers, critics say, jumped onto an already moving train. The popular revolution did not wait for the politicians to burst out. Like in Tunisia, the Egyptian uprising was not an event that occurred upon the directives of some high-perched leaders. No theory preceded these revolutions. They really were a spontaneous mass movement, grown out of grassroot activism.

Indeed, Morsi and the Brotherhood made countless miscalculations. First, they linked the revolution that toppled Mubarak to the movement that Hassan al-Banna initiated in 1928 to prepare for an Islamic state. Such a project has nothing to do with the liberal democratic pluralism that young Tahrir Square activists – and before them, Kifaya and other civil society movements — were claiming. Moreover, the Brotherhood defined itself by opposition to the Western political system.

The Muslim Brotherhood did suffer from exclusion and repression under the rule of Mubarak and his predecessors, but it was not the only political victim of the former regime. Thus, nothing entitled the Brotherhood to claim the “paternity” of the revolution.

Everybody remembers the controversy over the pseudo-constitutional expansion of the presidential powers — that was Morsi’s second mistake. Moreover, he alienated liberals and secularists – Copts included — by failing to reassure them, moving to entrench Islamic laws and concentrate power in the hands of the Muslim Brotherhood. In a context inflamed by attacks on Christians and Sufis, and a wave of mosque takeovers, with the Brothers losing student elections at the University of Alexandria to the benefit of Salafists, the Muslim Brotherhood found themselves in danger of being outflanked to the right. To protect their Islamist base, they alienated secularists and liberals when they seemed to be involved in an outbidding process with the Salafists over social choices.

Against such behaviour, the opposition mobilized its forces to stop the Brotherhood’s fast attempt to swallow Egypt's government institutions. The January 25 revolution, according to the June 30 movement, was diverted from its initial course to the benefit of a single component of the Egyptian political spectrum: the Muslim Brotherhood. For the June 30 movement, it is now time to get the revolution back on track and link it to its historical antecedent: the 1919 revolution against the British, which represents the starting point for a progressive and liberal Egypt.

The Islamist and liberal-secular narratives were already in confrontation with each other, well before Mubarak's ouster. For Islamists, what happened on July 3 was a coup against a democratically elected president. Whereas for the liberal-secular bloc, Morsi's overthrow by the military was the will of the people.

This has led to some observers asking, what next? Will we see the Algerian scenario of the 1990s unfolding in Egypt, with an Iraqi sectarian scenario?

Given what is happening in Syria and the violent history of the Brotherhood, it is hard to rule out a violent reaction from the Islamists. Over time, the Muslim Brotherhood has followed three different ways as a strategy to reach power: Da’wa (missionary work); participatory politics; and violence.

In the 1950s, the militant faction of the movement clashed with Gamal Abdul Nasser’s new military regime, which led to the dissolution of the Brotherhood in 1954. However, inspired by Sayyid Qutb, the takfiri factions started their activism. To reach the end goal of an Islamic state, they adopted the strategy of a violent takeover of the state, with a top-down Islamization model. Even throughout the 1970s and 80s, I. E. Altman reminds us that the disciples of Qutb:

“…rejected as apostasy the ideas of democracy, political pluralism, parliament, man-made laws, elections, and political parties, and objected to any involvement in the Egyptian political system and institutions, as these were non-Islamic entities borrowed from the infidel Western world and serving a jahili (non-Muslim) state.”

However, resorting to violence will not help the Brotherhood return to the political stage. The Egyptian military proved again that it is not only the backbone of Egyptian society, but also a political actor. As with Turkey, where the military intervened several times to oust Islamists and get the institutions back on the secularist track, Egypt could undergo such a test on the long path to democracy.

The Art of Compromise

To do so, the Muslim Brothers would have to adjust to the requirements of modern Egyptian society — not the other way around.

Since the 19th century, Egypt has been the engine of modernism in the Arab world, with liberal thinkers like Salama Musa (1887-1958), Ahmed Lutfi al-Sayyid (1872-1963), and Taha Hussein (1889-1973). Democracy, for Musa, was “a system of society before it became a system of government. Nay, it is a system of government only because it is the result of a certain system in society.” Al-Sayyid , a self-declared disciple of John Stuart Mill, promoted the idea of an independent Egyptian nation, organized according to the principles of liberalism, governed democratically, and linked educationally and culturally to Europe.

While we find this trend still working through the Egyptian cultural and political spectrum, the Muslim Brotherhood initially made reassuring statements, referring to the Turkish model (i.e. the AKP of Erdogan). The question is: How could the Turkish Islamists reach power several times without a compromise with the secular state and its military guardians? Such a compromise is needed if a national consensus is the target of the Islamists who would never be able to govern Egypt without it.

In other words, if Islamists want to remain as a positive component of the political scene in Egypt, the Muslim Brothers should learn the art of compromise. Most importantly, they should forget their initial goals (i.e. the strategy of gradual Islamization of society and state) for the sake of democratic participation in a liberal, pluralistic political system.

A Hudson Institute paper by I.E. Altman noted three distinct stages in the evolution of the MB.

“The first phase, from the MB’s [Muslim Brotherhood] foundation in 1928 to the 1952 Revolution, was dominated by the classical MB strategy formulated by the Movement’s founder, Hasan al-Banna, namely the educational or missionary (da’wa) strategy — the Islamization of society and the creation of an Islamic state as a gradual, multi-stage, ‘bottom-up’ process. The rise of a militant faction in the Movement toward the end of this period and the rivalry with the new military regime led to the second phase — dissolution of the MB in 1954 and its harsh suppression by Abd al-Nasir, organizational paralysis, and the emergence of the takfiri factions inspired by Sayyid Qutb. The third phase is that of the ‘Second Republic,’ under Presidents Sadat and Mubarak. Rejecting the isolationist and violent strategies of the takfiris, the MB opted for reform and gradual Islamization ‘bottom up’ through both da’wa and increased use of the democratic tools made available to them.”

Clearly, the Muslim Brotherhood was at the third stage. However, the movement of June 30, backed by the military, is pushing the Brotherhood toward a fourth stage, wherein the notion of gradual Islamization has to be abandoned if the Islamists are to survive as a political movement. An evolution toward the acceptance of a liberal, secular, and multi-partisan society is the open gate for participation in power. If the Brotherhood refuses this option, it is difficult to predict its future.

The choice is painful for the hardliners who have asserted they will not cooperate with the new “illegitimate power.” While many of the Muslim Brotherhood's leaders are now in custody, the outcome of the test is still unpredictable.