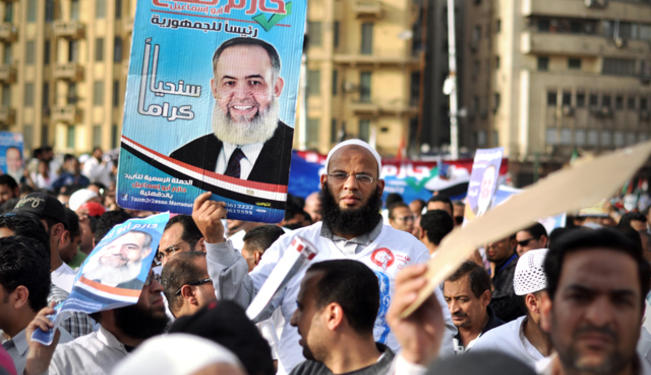 Omar Farahat examines the origins of Salafis, and argues that the question of shari’a has to be resolved before Egypt can witness any kind of durable stability. The following is an executive summary from the essay, originally featured in the Arches Quarterly.

Prior to the outbreak of the popular revolution against Mubarak’s regime in January and February of 2011, and the subsequent developments, talk within political and intellectual circles about Islamist presence and potential in Egyptian politics was almost exclusively centered on the Muslim Brotherhood. After all, it was the Brotherhood that consistently competed for parliamentary seats, organized massive student protests, and overall showed their readiness and willingness to participate in Egypt’s messy political and social affairs.

However, in the tumultuous transitional period that Egypt embarked upon following the eruption of the popular revolt early in 2011, the picture was complicated by the emergence of other self-proclaimed Islamist groups as capable political actors, such as the al-Jamaa’a al-Islamiyya, but most significantly, the Salafis. While the former were notorious for their violent history, the latter had been virtually invisible on Egypt’s political radar since their establishment in the 1970s and until their rise to prominence following the revolution. Salafis stormed into the spotlight over the past two years, not only becoming a constant fixture in Egyptian daily media, but winning, through their recently-formed Al-Nour party, almost one quarter of the parliamentary seats in the first post-revolutionary elections, a massive victory by any standard.

Scholars and political analysts watched these developments with a sense of helplessness, and often disbelief. “Where did they come from?” is a question that would, more often than not, be raised in discussions that involved the rise of, and, most recently, divides within, the Salafis in Egypt. This would often lead to the misguided claim that, after the series of Arab popular uprisings, “clusters of worshipers across the Middle East have morphed into powerful Salafi movements that are tapping into the disillusionment and disorder of transitions,” as indicated in a New York Times  article.

Salafism and the Salafis

Before asking why, and to what extent, the Salafi influence was underestimated for all those years, we ought to think about what it means to be a Salafi or Salafist. The “salaf” are the righteous predecessors, more specifically the Prophet Muhammad and his companions, or, in a stricter sense, simply the prophet. Accordingly, being Salaf-i means to adopt the example of the righteous Salaf as the primary, or even exclusive source, of ethical – and, eventually, political – guidance.

The current political reality of Egyptian Salafism as shaped and re-shaped by the post-January 25 events gives political Salafism a very particular form that easily distinguishes it from, on the one hand, the historical trends it attempts to identify with, and, on the other hand, the most general habits and convictions of Egyptian Muslims at large. One significant aspect of the inevitably politicized version of Egyptian Salafism in the post-revolution era is the insistence on strictly and mechanically judging contemporary socio-political phenomena through the lens of what appears to Salafi leaders as the self-evident normative positions of Muslim ethics, as would have presumably been approved by the righteous predecessors.

The sharpness and inflexibility of much of the politically-relevant Salafi positions are received by non-Salafi Egyptians with very diverse reactions, including sympathy, indifference or even amusement, but almost never with profound well-reasoned approval.

It may seem odd to claim that a group that achieved such a massive electoral victory is out of touch with reality, and in fact it is. However, I believe that the Salafis’ success and on-going turbulence are profound signs of the uniqueness of the political scene in post-January 25 Egypt.

To a large extent, the impressively broad Salafi clientele was constituted of social segments that had become economically and socially irrelevant to capitalist-oriented state. After the revolution when the virtual lines of social segregation had finally been broken, it was inevitable that any attempt to begin a democratic process would include this widely popular group, even if their followers did not particularly sympathize with democracy itself.

We ought to consider whether adherence to a supposedly superior and glorious past is in fact a feature of modern Egyptian Salafis. In other words, ought we to believe the Salafis of al-Nour party when they claim that they are really Salafists? In order to be Salafi, one should faithfully follow a convincingly similar version of what can be seen as the practice of the predecessors in question. It is, however, my contention that the modern Salafis’ approach to matters of Islamic law and ethic is radically removed from anything that can remotely be attributed to an established legal-ethical practice in the first four centuries of Islam, if not more. Not only are responses given by Salafi scholars to questions of Islamic ethics entirely unrelated to the epistemological system within which early Islamic law functioned, the recent figures they hold as authoritative, such as Ibn Baz and al-Albani, employ juristic methods that were unheard of in early Islam.

By and large, contemporary Egyptian Salafi scholars, and the scholars they heavily rely, upon employ a method of extensive citation of textual sources, predominantly sayings (ahadith) of the prophet, following which they immediately pronounce their answer to the question.

The modern Salafi manner of approaching Islamic law and ethics has been utterly unknown in early Islamic history. During the early expansion of Islam, as shown by recent studies, the proper course of conduct of the members of the new Muslim community was established, in light of the Qura'nic ethics, with a combination of references to actions of the prophet and his companions, and by well-reasoned opinion.

By the early twelfth century, the shari’a had emerged into an extremely complex intellectual edifice, which combined, among other things, sciences of authentication of prophetic traditions, interpretation of the Qur'an, and disciplines of juristic theories and methodologies, the most prominent of which being usul al-fiqh (lit. the roots of legal knowledge). At no point during those first centuries, in which shari’a was the supreme source of control of conduct in the Muslim world, had the opinion that solutions follow immediately and mechanistically from the text been given any significant weight.

We have shown that the claim by modern Salafis to establish some form of continuity with early Islamic legal and moral traditions is tenuous at best. How, then, can they enjoy such a wide popularity if their most basic claim is so deeply flawed?

Even though they fail to establish a genuine continuity with early Islamic thought, or, for that matter, fail to offer any intellectually valuable contribution to Islamic legal theory, Salafis do impose on the excessively fluid Egyptian political scene the most basic question in its crudest form: what about shari’a? For anyone who is willing to face the messiness of Egyptian politics in its face, it is flagrantly clear that the question of shari’a has to be resolved before Egypt can witness any kind of durable stability. A very significant segment of the Egyptian population is simply not ready to give up on twelve centuries of history and some central elements of its identity, for the sake of a secularist project promoted by a condescending elite that promises very little beyond some Enlightenment values and materialist gains.

Whereas the Muslim Brotherhood represent the most opportunistic form of political exploitation of such fact, the Salafis bring it forth in its more radical and blatant form. Merely pointing out to the abstractness of some of their positions will not help solve Egypt’s complex socio-economic issues.