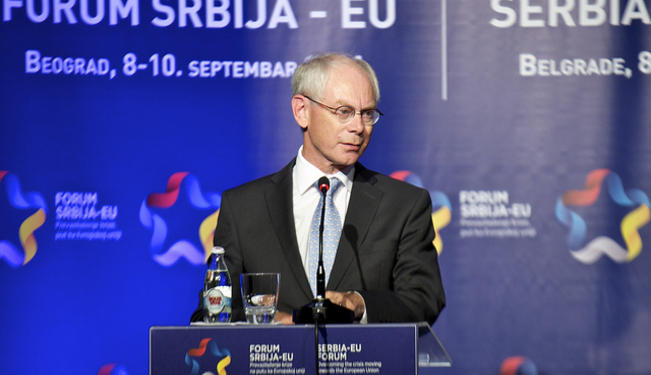 Regional stability in South East Europe, as the main concern of the EU enlargement policy, needs to be supported further. Dušan Reljic thinks it is necessary to publicly strengthen the spirit of Europe to achieve this goal.

For the first time since the ‘Euro-barometer’ came into existence, the majority of the respondents from the EU member states oppose the admission of additional countries to the EU. Right now 53% are against further EU enlargement. Germany has the most reservations: only 20% would welcome the admission of additional states to the EU. Only in Poland there is still a clear majority of 62% in favor of further enlargement. It seems that in the light of the worsening Eurozone crisis, EU citizens are losing their will to show solidarity with the “poor relatives” in Eastern Europe who are lining up at EU’s doors as candidate countries.

The West Balkan countries that are hit hard economically could need the welcoming arms of the EU – the same is true for the post-socialist countries of Central Europe or the post-authoritarian states of Southern Europe (Portugal, Spain, Greece). After all, the West Balkan crisis is only partly home-made, since most of the acute problems are a result of an “infection” created by the close relationship with the EU. Since the economic situation in the most important EU partner countries is floundering, the national economies of the West Balkan states are in freefall. In the areas of external trade  – around 60% of which is with the EU – capital investment and banking, the region mainly depends on (in anticlimactic order) Germany, Italy, Austria, Greece, France and Hungary. The Eurozone crisis has led to shrinkage of exports from Southeastern Europe to the EU and of investment from EU companies. Banks in the West Balkans are mainly controlled by Italy, Austria, Greece and France. A lot of them are at risk and refrain from handing out new loans.

Economic transitions has failed in most West Balkan states

In most West Balkan states the transition model, which was highly praised by the EU, the International Monetary Fund (IMF) and other international partners have all failed. Although the economic systems in the region have been liberalised during the past two decades, industrial production and international competition have been in decline, while foreign debt and budget deficit have been on the rise. The far-reaching privatization of the economy and large-scale borrowing from foreign countries have not led to the promised push in modernization and exports. On the contrary, big parts of the real economy have been waning, and the inflated trade and service sector is not profitable enough to pay for the debts and to make new growth possible.

Because there are no real alternatives, Southeastern Europe will have to continue its current economic strategy: the West Balkan states will have to ask the IMF for new bridging loans. Fresh money from Washington will not be handed out without further cuts to the budget, particularly to the already-low welfare benefits. The few remaining profitable state owned companies like, for example, in the areas of telecommunication, energy supply and toll collection, highways and airports will sooner or later have to be sold to transnational investors. In short, Southeastern Europe can only hope for a quick recovery of the EU. Countries on the European periphery could then again export more to its core; these investments would come back to the regions, and local branches of Western banks would then again provide more capital to the economic cycle.

There are two surprising political tendencies in the West Balkan states. Actually, one would think that the dramatic economic crisis has shattered the population’s trust in the post-socialist political order and EU accession as the only reasonable future prospect. However, throughout the region, fairly democratic elections and undramatic power transitions – as seen recently in Serbia – are still taking place. Regional stability – one of the core concerns of the EU enlargement policy in Southeastern Europe after the end of the wars in the former Yugoslavia – has basically not been damaged so far, despite the failure in applying the Western free-market model. Also, in most West Balkan states, the majority still wants EU accession to take place – despite the “infection” caught from the EU’s economic struggle and despite the reluctance of most EU citizens to welcome new “cohabitants” into the “European house”. Reform laws recommended by the EU are still being passed in the parliaments without any reservations. Even though support for EU accession is not at 90% anymore, the number of accession advocates has stabilized at between 50% to 60% according to the ‘Euro-barometer’.

Democratic stability and the preservation of EU orientation in the West Balkans are good news for the EU. Now it is up to the politicians to circulate it widely and remind EU citizens of the central and strategic goal of the EU: the strengthening of peace on the continent through the accession of new states to the Brussels community. Especially during the times of the debt crisis, the European spirit has to be strengthened and pursued further, with the support of EU citizens.

This text was translated and originally published by SWP on 28 August 2012.