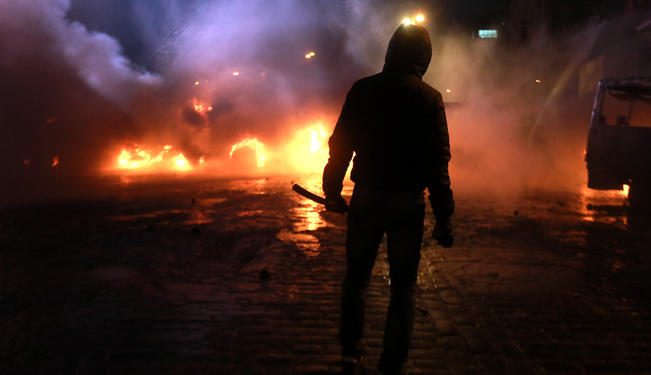 China's autocrats are hoping for a Russian victory in Ukraine.

As events unfold quickly in Ukraine, Russia's increasingly close ally China is hedging its bets on an uncertain outcome. China has been quick to condemn US and European involvement in Ukraine's affairs, but has withheld judgment either for or against Russia's military actions in the country.

Meanwhile, Chinese Communist Party (CCP) propagandists have made use of the unrest in Ukraine to serve as a warning for Chinese citizens of the dangers of rapid political change.

In official state-run media, the Chinese government has accused the West of maintaining a "Cold War mentality" against Russia in the contest for influence in Ukraine, and of "meddling" in Ukraine's affairs by manipulating popular opinion against Russia to favor Western interests.

Before the fall of pro-Russian President Viktor Yanukovych, China said that the West "frequently interferes in [Ukraine's] internal affairs by instigating the opposition party to challenge the incumbent government," and warned that China must resist Western influence to avoid the "torment" and "turbulence" countries such as Ukraine have experienced.

Since the fall of Yanukovych and the onset of hostilities with Russia, China has assumed a measured tone toward Russian moves while continuing to criticize the West and to use the unrest in Ukraine as a warning for domestic Chinese audiences. "China is deeply concerned with the current Ukraine situation," said Foreign Ministry Spokesman Qin Gang on March 2, urging a "political solution," and adding that "there have been reasons for today's situation in Ukraine" without detailing what those reasons might be.

The CCP, as China-based writer Adam Minter observes, "views unrest anywhere in the world as a teaching moment for those who might clamor for more rapid reforms in China."

To begin with, China is one of the few countries in the world whose leaders still openly mourn the collapse of the Soviet Union (USSR) and the disintegration of the Soviet empire. While Western audiences cheered the fall of the Berlin Wall, Chinese leaders must have wept and quaked with fear at the prospects for their own future hold on power. (In statements that must have deeply endeared him to Chinese leaders, Russian President Vladimir Putin has also called the collapse of the USSR a "genuine tragedy" and "the greatest geopolitical catastrophe" of the 20th century.) "With its disintegration," according to China, "the USSR that could once help resolve the contradiction between East and West Ukraine will help no more."

State-run media in China abound with pro-CCP explanations on the crisis in Ukraine and how China can avoid similar problems: CCP theoretical magazine Seeking Truth (Qiushi) identified voting as "the root of the problem," because voting allows ethnic differences, religious differences, and differences of opinion among people to get in the way of national unity. As long as China has a one-party dictatorship, says the CCP, Chinese people never need worry about any such differences getting in the way of Chinese national unity.

Qiushi’slist of things for Chinese people to fear and avoid also included "failure of democratic governance" leading to "social unrest" and "chaos"; and "velvet revolutions" incited by the United States based on its "need to dominate the world."

A New Axis of Autocracy

China and Russia have been described as a "new axis of autocracy," jointly pursuing a common interest in preserving anti-Western authoritarian rule by "exporting repression" and collaborating in a mutual support network with anti-Western autocrats throughout the world.

For Russia, this effort has mainly focused on backing pro-Russian autocrats like Viktor Yanukovych and cultivating grassroots pro-Russian support in former Soviet satellite states — the latter includes granting easy Russian citizenship to Russian speakers in former satellite states, so as to have a ready population of Russian citizens to "protect" through military intervention.

If anyone is guilty of harboring a "Cold War mentality," it is not America and the West but China and Russia.

China's autocrats are surely hoping for a Russian victory over pro-Western forces in Ukraine. No one likes to be caught rooting for a loser, however, and China has economic interests in Ukraine that will be important for Beijing in any event. For the present, therefore, China's autocrats are hedging their bets, and warning their own citizens against any similar turn of events in China.

*[This article was published in partnership with the Foreign Policy Association.]