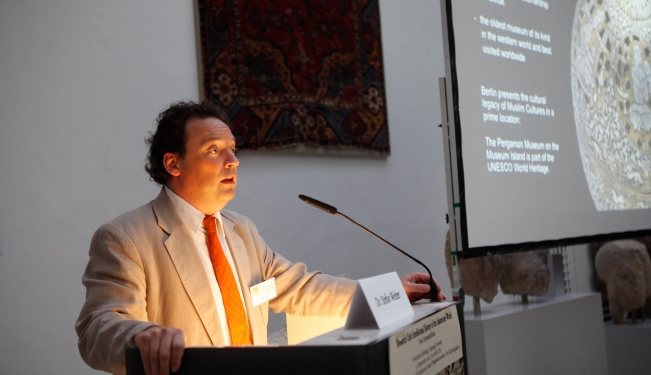 A review from the opening ceremony at the Museum of Islamic Art, where the Research Unit at Freie Universität Berlin presented their study of the intellectual history of the Islamicate world.

Respect for other religious faiths, and interreligious exchange did not appear for the first time during the Enlightenment. In fact, one theory among scholars posits that there was close intellectual exchange between Muslims, Christians and Jews during the Middle Ages.  At Freie Universität Berlin a new research unit was established to study the intellectual history of the Islamic world with a focus on illuminating the beginnings of close intellectual exchange among these groups. In an official opening ceremony in the Museum of Islamic Art in the Pergamon Museum, Professor Sabine Schmidtke introduced her research team and described the work and goals of the Research Unit on the Intellectual History of the Islamic World.

“Understanding is the basis for open dialog,” stated the president of Freie Universität Berlin, Professor Peter-André Alt, as he welcomed the large audience. Understanding in turn requires knowledge about history. A new, well-founded assessment of the intellectual history of Islam and more knowledge about the possibilities for productive and peaceful coexistence between religions are “essential for the future of the globalized world.”

The director of the research unit, Sabine Schmidtke, a professor of Islamic studies at Freie Universität, described the close symbiosis between Muslim, Jewish, and Christian thought in the Islamic world since the Middle Ages. Professor Annette Schavan, the German Federal Minister of Education and Research, stated that she expects that the new research unit will add momentum to the development of a rational perception of Islam. “A comprehensive view of the intellectual history of Islam from the Middle Ages to modern times is crucial for the self-understanding of Islam as well as for the perception of Islam in the West and the relationship between the two.”

The Mschatta Hall in the Museum of Islamic Art in the Pergamon Museum was an appropriate setting for the opening ceremony of the research unit; it contains an ornate facade from a desert palace (located in present day Jordan) of the eighth century. The intricately designed building is symbolic of the complexity of the Islamic world during the Middle Ages, and served an impressive and fitting backdrop for the presentations.

International Network in the Middle East, Europe, and North America

The diverse academic perspectives of the presenters reflected the various disciplines covered by the members of the research unit. Working in the Middle East, Europe, and North America, they are scholars of Islamic studies, Jewish studies, and Christian Orientalism. Their aim is to make a combined effort to overcome the current division between Muslim and non-Muslim research on Islam. Consisting of both Muslims and non-Muslims, the researchers intend to examine the intellectual richness and cultural diversity that have characterized the Islamic world since the Middle Ages. The group endeavors to overcome traditional disciplinary boundaries, and the various faiths of Islamic societies represented by its members will also play a role. With this approach, Sabine Schmidtke and her team will be working in the tradition of the scholars whose ideas they are investigating. Schmidtke is looking forward to working with the multi-religious team. “We find it important to emphasize that pluralistic social models are not a new invention, but rather, that they existed in the Islamic world for centuries. Since the Middle Ages, Muslim, Jewish, and Christian thinkers have been influencing each other.”

For a full documentation (videos, picture gallery etc) of the Opening Ceremony of the Research Unit Intellectual History of the Islamicate World, September 13, 2011, see
http://www.geschkult.fu-berlin.de/e/islamwiss/Intellectual_History_in_the_Islamicate_World/opening/index.html