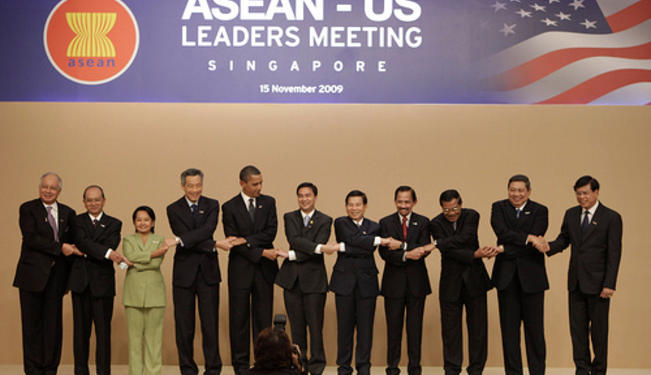 After years of isolation and sanctions, the US-Burma relation has seen improvements in recent months. What is the prospect of this rapprochement? The article analyzes the bilateral relationship in historical perspective.

The US-Burma relationship was mostly cordial in the years following Burma’s independence from the British in 1948. It strained with the Burmese military coup in 1962, and worsened in the aftermath of the 1988 mass uprising and the subsequent 1990 general election.

The uprising and general election marked the beginning of the United States’ isolationist policy towards Burma. The massacre of thousands of demonstrators and the nullification of the election result in Myanmar stood in stark contrast to the US’ fundamental diplomatic goals of spreading and promoting democracy and human rights.

The consequence of diplomatic fall-out was evidenced by the downgrading of the US representative in Burma, from ‘Ambassador’ to ‘Charge d'Affaires’. The mission of the last ambassador, Burton Levin, was terminated in September 1990, four months after the May general election. Ambassador Levin was replaced by Charge d'Affaires Franklin P. Huddle, Jr., and since then no full diplomatic relationship has been resumed.

The troubles in the relationship were exacerbated by the imposition of a broad range of sanctions primarily during the administrations of Presidents Clinton and George W. Bush in the 1990s and the 2000s respectively. The incumbent President Obama renewed sanctions after he assumed office in January 2009.

The actions of the executive branch have been overwhelmingly endorsed by the legislative branch, and vice-versa. Since the sanctions were first imposed, there has been no tangible disagreement amongst US lawmakers over the question of renewing them, despite the existence of other ideological and strategic differences along party lines. Campaigns by advocacy groups, and the situation inside Burma, provided adequate empirical evidence for the justification of continued sanctions.

The rationale behind the US’ sanctions policy is to punish the Burmese military government for two reasons: its gross human rights violations, and for not honoring the results of the 1990 elections. Through sanctions, the US government intended to pressure the Burmese government to pursue the path of democratization.

While the US pursued an isolationist approach, the Burmese government leaned toward other international actors in the region, such as China, India, and members of the Association of Southeast Asian Nations (ASEAN) to sustain its rule and for economic assistance. Apart from economic and military reasons, the Burmese government also befriended China and Russia for their veto power at the UN Security Council. The Burmese government’s policy was to hold on to power for as long as it could despite sacrificing the benefits that would possibly accrue from cooperating with the Western nations, particularly the US and the EU. While the US and the EU kept Burma at arm’s length, the economic and strategic interests of several Asian countries led the latter to engage with Burma in defiance of the US. Such conflicting interests and approaches from the international community well served the needs of the Burmese military regime.

The engagement policy provided a platform for the US to work with both pro-sanctions and pro-engagement groups. The engagement policy was boosted by the confirmation of Derek J. Mitchell as Special Representative and Policy Coordinator for Burma in August 2011. His appointment created the opportunity for more high-level meetings between the two nations, and a venue for building mutual trust.

The progress of bilateral relationship was contingent upon political development inside Burma. The first sign of political thaw emerged when President Thein Sein invited Aung San Suu Kyi, then general secretary of the National League for Democracy (NLD), for a meeting in August 2011. The meeting was followed by NLD’s re-registration, since it had been disbanded in 2010.

US Secretary of State Hillary Clinton’s visit to Burma in December 2011 significantly boosted the engagement strategy. This top diplomatic visit, the first since the one made by John Foster Dulles in 1955,was arranged after the Burmese government implemented a series of tangible democratic reforms, such as reaching ceasefire agreements with armed ethnic groups, reconciliation with the NLD, and the releasing of political prisoners.

After the successful by-election in April 2012, the US reciprocated with some key initiatives, including Washington’s intention to re-establish the US Agency for International Development (USAID) mission to Burma, and to lend support for a normal UN Development Program (UNDP) country program. The Obama administration also plans to authorize funds to be sent by private US entities to Burma for non-profit activities, to facilitate travel to the US for select Burmese officials and parliamentarians, and to begin a process of easing bans on the exportation of US financial services and investment.

Since the announcement of these key steps on April 4 by the Secretary of State, the United States Treasury Department has issued a general license authorizing certain financial transactions in support of humanitarian, religious, and other not-for-profit activities in Burma, including projects for government accountability, conflict resolution, and civil society development. These developments are indicative of the improvement in the bilateral relationship.

Despite this, some fundamental questions remain unanswered. For example, will the present Union Solidarity and Development Party (USDP)-led government be willing to amend a constitution that guarantees military dominance, including the reservation of 25% of seats in the parliament? Will the central government be willing to grant autonomy to ethnic minorities, which has been the root cause of the country’s insurgency problems? Will the government hold a free and fair election in 2015? If so, will the result of such an election be honored?

Until these core issues are addressed, the political problems in Burma will persist. Without their proper resolution, Burma can revert to either military dictatorship or another form of authoritarianism. A political environment of this nature will only be a hindrance to the full normalization of the US-Burma diplomatic relationship.