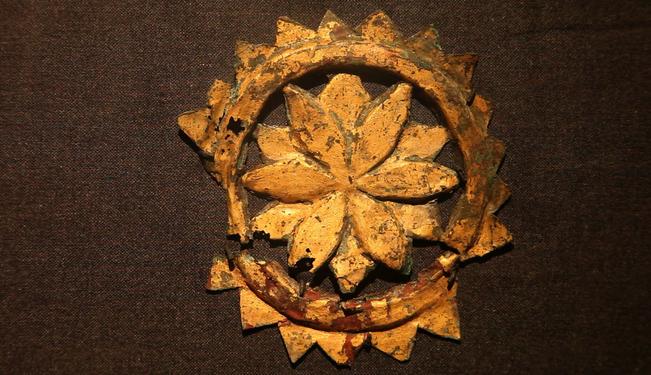 What will the fate of Afghanistan’s culture be? [Note: Click here to view the photo feature.]

Years of war have ravaged Afghanistan’s archeological heritage. The demolition of the Buddhas of Bamiyan only presaged what would be a decade of destruction, smuggling, and looting of Afghanistan’s rich culture.

Despite international condemnation of the bombing of the Buddhas by the Taliban, few have noticed the situation of Mes Aynak, a vast and rich archaeological site in Logar Province, Afghanistan. Mes Aynak rests upon a copper mine worth billions of dollars. In 2007, the China Metallurgical Group Corporation (MCC) was granted rights to mine the site, meaning that Mes Aynak would be razed to the ground.

Brent E. Huffman, an award-winning documentary filmmaker and associate professor at Northwestern University’s Medill School of Journalism, has launched a project to save Mes Aynak. He also plans to release a documentary film about the site.

Will Calhoun: Can you give us some background on Mes Aynak? How is the site significant?

Brent E. Huffman: I’ve described it as an ancient city of vast size. It was located at a major crossroad on the Silk Road. There are many layers of material. The top layer that archaeologists have done the most work on is a 2,000-year-old Buddhist site that’s over 500,000 square meters in size, or 98 football fields — so an enormous area. There are over 400 life-size or bigger Buddhist statues, ancient manuscripts, temple structures, just a wealth of discoveries and information.

The Buddhists were mining for copper using ancient techniques, so archaeologists are really excited about the ancient mining and smelting that was done. Beneath that Buddhist site is a 5,000-year-old or older Bronze Age site, an enormous area filled with this treasure trove of Bronze Age material.

Calhoun: When was the site first discovered?

Huffman: That’s sort of when things get complicated. I’m sure the site was known about before this, but the first written evidence that the site was traveled to was in the 1960s by French archaeologists. I don’t know if there was any significant study of the site at the time. The site was left completely unprotected. No protection or way to visit the site was ever put in place, so Mes Aynak has been heavily looted since the 1960s.

The big irony is that when MCC arrived, they were unaware of the Buddhist site, so they signed the contract without knowing of the existence of the site above the copper deposit. When they came in they destroyed a local village to set up their camp, where they are currently staying. Initially they brought in 1,500 Afghan police officers to guard the mining compound and, in addition to guarding the compound, the officers were guarding the site. The Chinese have basically brought in this force that’s now protecting Mes Aynak really for the first time. Since the site is so famous, it is likely that it would be looted again if the Chinese were to leave, so it’s all quite complicated.

Calhoun: Who is mainly doing the looting?

Huffman: I would say that it is people from Pakistan who are crossing over, working with local people in Logar province who are very poor, starving to death, and have little employment. Selling these relics, unfortunately, makes sense for local people who have no other prospects. Looters from Pakistan return to the country and sell the relics.

Calhoun: How has the Afghan government been involved in efforts to preserve the site, if at all?

Huffman: In my opinion, the Afghan government has been part of the problem. There is massive corruption in the government, especially in the Ministry of Mines. When the deal was first signed in 2007, the rumor was that the minister of mines received a $30 million bribe from MCC. He denied accepting the bribe, but he did step down from his position.

I think it is quite likely that he did accept the bribe. He has since been replaced, but I fear the same sorts of allegations of corruption are true within the new Ministry. Obviously they want mining to begin, and they want it to begin as soon as possible. I think the archaeological findings are a thorn in their side, delaying the time when they can extract copper.

Calhoun: How about the international community? Have any organizations been involved in trying to preserve the site?

Huffman: This is an area in which I have been frustrated. I have tried to get UNESCO involved, and they won’t even speak to me.

I think the big fear is that when NATO and the US pull out of Afghanistan, there will be even more real serious safety concerns of how NGOs operate in the country, and big organizations like UNESCO are not involved. The big player initially was the French Archaeological Delegation, and they were really overseeing the Afghan archaeologists and giving expert advice. They’ve been forced out of the site more and more in the last few years, and I don’t really know how much access they have to Mes Aynak right now.

There has been some really bad news recently. Over the summer, I heard from the head of the Afghan archaeologists that due to worsening security, many of the foreign archaeologists had left Mes Aynak and sites have been abandoned. Right now only Afghans are working there, without funding, not knowing what the next steps will be.

Calhoun: Can you give us a picture of what the security situation is like at Mes Aynak?

How does one get there?

Huffman: That’s a good question. It’s very difficult to travel to the site, and security has been getting worse and worse. I started making the documentary in 2011 and, each time I traveled to Mes Aynak, the security situation had deteriorated. It’s only about 25 miles from Kabul, but because a lot of the roads are unpaved and rocky, whenever it rains the roads get washed away and become impassable, so it can take around 60 to 90 minutes to get there. It is located southeast of Kabul in Taliban country, so it’s pretty dangerous during the day and extremely dangerous at night.

I usually travel in an unmarked taxi from Kabul to get there. You have to get security clearance, and there are a series of checkpoints that the Afghan police have set up. The big security issue is that Mes Aynak is a combination of mountains and desert, so there are areas where you are very exposed, where you can be shot at or kidnapped. The main dangers are landmines or IEDs put on roads or bridges, and many Kabul police have been killed by landmines.

Another major issue is that MCC has made many of the locals very angry. The Chinese demolished a 500-year-old Afghan village called Wali Baba and made their base camp over that location. They made lots of promises to the locals, and those promises went unfulfilled. A lot of the locals feel like they have been lied to, and a lot of the security problems are related to that as well.

*[Read the final part on February 2.]