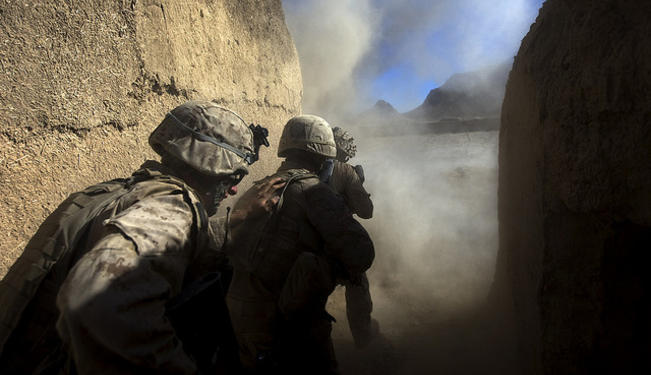 The global threat landscape this year will be shaped by the impending withdrawal of US-led coalition forces from Afghanistan. Jihadists will seek to extend their activities compounded by the uprisings in the Middle East.

A new global threat landscape is emerging with the impending withdrawal of US-led coalition forces from Afghanistan in 2014. This threat configuration will be shaped by the renewed activities of Taliban, al Qaeda al Jihad and a dozen like-minded groups located on the Afghanistan-Pakistan border who have survived a decade of global counter-insurgency and counter-terrorism measures. They are slowly but steadily returning to Afghanistan recreating the sanctuary they had pre-911.

In a reprise of the Soviet withdrawal in February 1989, the Jihadists and Islamists are already celebrating the Obama Administration’s plans to withdraw as Islam's victory over the West and a strategic defeat of the US. While most of them will focus on re-establishing a Taliban-like state, others will return to their home countries or neighbouring and distant conflict zones. The number of threat groups and state interests competing to advance their interests will turn Afghanistan into another Syria by late 2013 and 2014.

The complex but deadly mixture of competing forces will include over 20,000 fighters from two dozen jihadist groups on the Pakistan-Afghanistan border, mostly in North Waziristan. They include the Afghan Taliban, the Haqqani Network, Hezb-i-Islami, Pakistani Taliban, al Qaeda al Jihad, Islamic Movement of Afghanistan, Islamic Jihad Union and Turkistan Islamic Party.

In Afghanistan, state entities, surrogates and proxies of neighbouring countries Pakistan, Iran, India and Central Asian states, and distant powers like the US, France, Russia, China, and Saudi Arabia, will intervene overtly and covertly. With no boots on the ground, militarised counter-terrorism – US drone warfare and special forces -will be insufficient to push back Taliban's avowed return.

With the US-led coalition’s withdrawal Afghan security forces will have limited ability to fight back. While Pakistan will control developments in Afghanistan's Pashtun areas, Tehran will influence developments in Herat and surrounding areas bordering Iran. The regional warlords and transnational criminal organisations (TCOs) will compete to retain and expand their influence.

The developments elsewhere in the Middle East and Africa will compound the emergence of this new threat in South Asia. Although al Qaeda al Jihad is based on the Afghanistan-Pakistan border, it influences threat groups in North Africa, Levant and the Arabian Peninsula. Groups from outside the region notably from the Middle East are likely to return to Afghanistan and play training and operational roles.

The so-called Arab Spring in the Middle East and North Africa (MENA), contrary to Western expectations, has given a boost to threat groups in the region and created a permissive environment for violent extremism as much as democratic politics. The second and third order consequences of the West arming Libyan and now Syrian fighters, destabilised the Maghreb and Sahel and the Levant and beyond. Islamists from Caucasus to Southeast Asia are travelling to establish an Islamic state in Syria. The developments have already affected Jordan, a pillar of stability, and may eventually, destabilise the Gulf.

Africa is developing as a new epicentre of terrorism. The al Qaeda in the Islamic Maghreb (AQIM) expanded from North Africa to the Sahel. AQIM shared its expertise with Boko Haram (BH) in Nigeria. After Gaddafi's fall, North Mali has emerged as a training ground and a battlefield. Although al Shabab lost ground in Somalia its ideology has spread to bordering areas of Uganda, Kenya and Tanzania. Like al Shabab, BH is likely to join al Qaeda al Jihad in 2013.

The emerging threat of terrorism confronting the world will not be confined to conventional terrorism. While 80 percent of the attacks are using the gun and the bomb, recent developments in Syria, Iran, and North Korea and their links to or terrorist access to their arsenal, increases the likelihood of a biological or chemical attack.

In sum, the global threat landscape is likely to change dramatically this year. Functionally and regionally, the developments in Afghanistan will be the most influential. If the jihadists regain sanctuary in Afghanistan, it will affect not only Western security but Asia’s rise. Driven by success, returning fighters will reignite conflicts in Kashmir, Xinjiang, Uzbekistan, and Tribal Pakistan and other Muslim lands.

Battle-hardened fighters will threaten Asia. Seasoned by fighting Western armies in Afghanistan, they will contest Asian armies, law enforcement and intelligence services, which are 20 years behind western militaries.

Despite its formal withdrawal in 2014, the US will still remain the tier-one target of both al Qaeda al Jihad and the movement. Some associates such as al Qaeda in the Arabian Peninsula (AQAP), based in Yemen, present a comparable, if not, a greater threat to the US. Pakistan Taliban, as demonstrated in the Times Square attempt, has developed anti-western orientations.

Several new groups influenced by Salafi Jihadism have emerged in Syria and Libya. In place of one single al Qaeda, a multiple anti-US suicide- capable groups have emerged in the last 12 months. Like ordinary and organised crime, extremism and terrorism will remain long term threats to the world.

Of all the threats, the most significant will emerge from the US-led coalition withdrawal. The failure to build a credible Afghanistan military, law enforcement and intelligence capabilities before US withdrawal will create an environment of high threat like that of pre-9/11. A global strategy is needed more than ever before to better manage the existing and emerging security challenges in Africa, the Middle East and South Asia.

*[This article was originally published by RSIS on January 9, 2013].