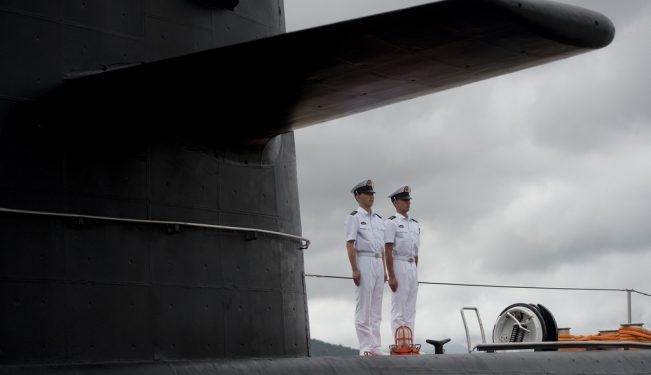 Ricardo Silva argues that China’s ascending naval power in Asian waters is changing the geo-political balance in the area and making Washington uneasy. Should China focus on maintaining an unstable peace with its neighbors, or on escalating its attempts to control the oil-rich fields lying under the seas adjacent to several of its neighbors?

After years of headlines about China’s economic ascendancy, it is now the Chinese Armed Forces which are making the news. From exotic weapons like the anti-carrier ballistic missile or the newest stealth fighter, the J-XX, to the aircraft carrier Shangri La and a growing quantity of advanced tanks, ships, and missiles, China is demonstrating new muscle in military affairs. All eyes are on the Taiwan Strait and the recent naval clashes between Chinese vessels and those of the Japanese Self Defense Force and of the US Navy.

Although Chinese diplomatic relations with the United States and Japan are a political issue of utmost importance for the region’s future, there are other tensions in the area that despite their potential for escalating into open conflict are not yet getting the same media attention.

Chinese borders have traditionally been a source of conflict. The last half century has shown that this trend is still very real. In the last fifty years, China did not go to war with either Japan or the US. Instead, it has fought its closest neighbors: Vietnam, India and the Soviet Union, following a pattern that shows just how unstable the frontiers of China are and how ready China is to go to war to defend what it believes is its territory.

The Rise of the High Seas Fleet

Since the Chinese army has traditionally been the big brother in the Chinese Armed Forces for most of its history, the People’s Liberation Army Navy (PLAN) has till now been a limited  green water (i.e. coastal) navy, concerned mostly with the defense of China’s coasts and maintaining the ability to put Taiwan under pressure. For decades it has complied with this mission by having scores of small ships that would be launched at the enemy in case of an invasion. The strategy was simple: the sheer number of vessels should counter any enemy fleet getting near the Chinese coasts, no matter how costly this could be. It was the naval version of the human waves tactics used in the Korean War.

But things are changing at a very quick pace. In just a decade China has built more warships than all the European countries combined. It has developed indigenous designs that range from small electronic sensors to nuclear submarines and it has also developed intercontinental ballistic missiles. In pursuing the capability to counter the US Navy, it has developed the world’s biggest conventional submarine fleet, and also managed to add dozens of modern frigates, destroyers and support vessels to its fleets. Moreover, China has recently raised the bar by completing its first aircraft carrier, the Shangri La (former Ukrainian Varyag). It is also believed to be working on two new carriers, thus creating a full carrier fleet. A new fighter, the J-15, is also being developed exclusively for use aboard the new carriers. In many ways it’s the Chinese copy of the Russian Su-33, but with new avionics and weapons. Photos of a naval AWACS (Airborne Warning and Control System) aircraft have showed up recently, and ASW (Anti Submarine Warfare) and SAR (Search and Rescue) helicopters will also be onboard the carriers. These will be protected by the latest destroyers and frigates of the fleet.

This latest development has created a big uproar amongst America’s right wing, which fears that China’s flattops could rival America’s naval supremacy in the Pacific. In reality, this Chinese carrier fleet will have little if any chances against the eleven carrier groups fielded by the US Navy. To counter these, China is developing an asymmetric approach, comprising the DF-21D, a ballistic missile that is being developed as an anti-carrier missile, the Xian H6D, an old bomber with a long range and the ability to carry two anti-ship missiles, and its huge conventional submarine fleet. These are the real dangers for the American flattops. Regarding China’s other adversaries; the Chinese carriers do have the ability to challenge them. For countries like Vietnam and the Philippines, the carriers will give the Chinese Navy the superiority in any conflict around the many islands being disputed in the South China Sea.

The South China Sea: The Next Battlefield?

With tensions running high between China and Vietnam, the Spratly and Paracel Islands have again become the main conflict between the two nations. A series of clashes in 1974 ended with China taking control of the Paracel islands. On the Spratly islands however, there is a stand-off involving not only China and Vietnam, but also the Philippines, Taiwan, Malaysia and even Brunei. Except for Brunei, all these countries have established military outposts over the forty five islands of the archipelago and there is growing strain to see who will start drilling the rich oil fields that lie beneath the sea.

At this point, China is showing an ever increasing presence in these waters. In the last two months several clashes have occurred between Chinese vessels and Vietnamese oil survey ships. Though cutting Vietnamese cables is the only violence occurring in the region, it’s more than enough to spur tension to a very high level, leading diplomats in the region to ask themselves a series of questions: How long will both countries avoid another military clash? And this time, will it be as limited as in 1974?

China now has a much more powerful navy than it did in 1974 and, in the near future, it will possess the ability to engage with a carrier group. It can also make extensive use of its submarine fleet and the huge quantity of naval mines it possesses. Vietnam could also use its growing naval capabilities to strike back at China where it hurts the most, i.e. its commerce, and the whole conflict could expand well beyond the waters around those tiny islands and become a fully-fledged war with unpredictable consequences for the region.

The Challenges That Lie Ahead

When looking at the PLAN it is possible to see the challenges that lie ahead for China. On the one hand, the need for open sea lanes for its commerce makes peace a necessity; on the other hand, energy is absolutely vital for an economy with double-digit growth, and the attempts to get to the rich oilfields in the South China Sea can potentially lead to dangerous wars with its neighbors. The balance between these two goals will require smart diplomacy from the Chinese Government.

Throughout the Pacific and Indian oceans, an arms race is taking shape. India is buying a dozen American P-8I: an ASW aircraft that could be very useful in countering China’s big submarine fleet. Vietnam, however, is buying strike fighters like the SU-30 MKK’s and a fleet of 6 Kilo submarines from Russia, giving the nation the ability to put at risk the commercial flow to Chinese ports. Even the Japanese government is planning to increase its submarine fleet from 16 to 22 and is developing a new ASW aircraft, the P1. South Korea is also investing heavily in its naval capabilities, and the Philippines is buying second hand ships from the US in order to bolster its naval capabilities.

The Korean War was a lesson to both China and the United States. Since then, both countries have kept a watchful eye on each other though neither seems too eager to have another go at war. The US has no defense treaty with Vietnam and is unlikely to intervene if China attacks Vietnam. On the other hand, the US navy is likely to come to the aid of Taiwan should it be attacked by its belligerent neighbor. If this comes to pass, China will try to attack US naval bases in Japan and Korea and it’s clear to the Chinese leadership that an attack against the US or its allies would have a domino effect that could draw China into a war against most of its neighbors. This would mean a naval and air blockade as well as the consequent loss of access to raw materials and export markets that could asphyxiate China’s economy.

For China, a war with Vietnam therefore represents a far smaller danger and the prize may be vital for its economy. So perhaps the biggest danger to peace in the region lies not in the rebel island of Taiwan but instead in the small Spratly and Paracel islands, where war may well one day redefine the whole balance of Southeast Asian geopolitics.