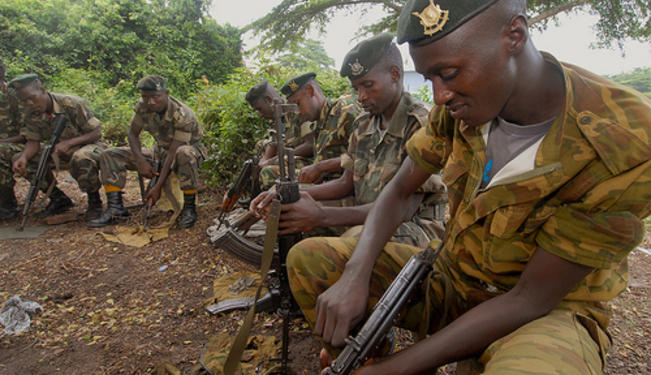 Analysis on US and UN efforts at reconstructing Somalia and the successes and challenges of this campaign.

Afghanistan scarcely flickers in the American campaign debate, and we have 90,000 troops engaged in active combat there. Therefore, it is no wonder that Somalia, where there are no regular US troops on the ground, does not register at all with the American political class.

Yet Somalia is, after Afghanistan, the most fiercely fought war zone in the world, where international forces are battling to prevent a country’s takeover by Al Qaeda allies. And the Obama administration has crafted alliances that are apparently turning the tide against Islamic extremists, alongside a multilateral naval force securing international shipping against piracy.

It is not surprising that Americans have erased Somalia from their memories. The US abandonment of a United Nations peace operation there after American deaths in a botched Rangers raid in Mogadishu in late 1993 was humiliating—and is said to have emboldened Osama bin Laden to global designs.

Besides, Africa doesn’t matter, does it? Then-Senate minority leader Robert Dole remarkably declaimed after “Black Hawk Down” that the lives of 500,000 Somalis were not worth the life of a single American soldier—which so spooked the Clinton administration that it stonewalled UN intervention against genocide in Rwanda six months later.

But leaving Somalia to its warlords has spawned Islamic extremism, much as the infighting among Afghanistan’s mujaheddin warlords in the 1990s gave rise to the righteous Taliban. Patient efforts by the UN to patch together an inclusive interim regime have foundered on the Transitional Federal Government’s infighting and its failure to inspire strong public support—and on attacks by al-Shabab, the group that holds the Al Qaeda franchise in Somalia.

After an Ethiopian incursion to overthrow the Islamists at the end of 2006, the African Union (AU) began to assemble an African “peacekeeping” force under UN Security Council authority to support the transitional government. Al-Shabab furiously fought the African troops—largely from Uganda and Burundi—and their mandate was soon changed to enforcement against the insurgents.

The advance into Somalia of Kenyan forces last fall has tipped the military balance significantly against al-Shabab permitting a faint optimism that Somalia’s long nightmare of anarchy might yet end. In a series of coordinated moves, the international community has intensified the pressure both on al-Shabab and on the ineffectual transitional government whom the internationals are backing.

The Security Council last Wednesday approved a 50% increase in the size of the African Union force, to 17,730, and relaxed its previous bar to participation by Somalia’s immediate neighbours so that the Kenyan force now in the country’s south could be integrated into the AU force. In exchange, Kenya is to receive funding for its costs from Washington and the UN. The force has been funded in part by voluntary contributions from outside powers—the US has contributed $338mn to date (a rounding error compared to its costs combatting jihadists in Afghanistan)—with some logistical support from the UN.

The Security Council also set August 20 as the date for closing out the “transitional” government and underscored its commitment to the “territorial integrity” and “unity” of Somalia. Would-be breakaway enclaves in the north—“Somaliland” and “Puntland”—are to be knitted back into a federal Somalia. Regional leaders from across the country recently joined a UN-sponsored national constitutional conference in Garowe that laid out arrangements for governance and power-sharing in the successor government, with selection of a national constituent assembly and two houses of parliament, with 30% of each body to be women.

In a sign of the importance the US attaches to resolving the twenty-year war, Secretary of State Hillary Clinton joined an international conference on Somalia in London last week to insist that the international community should now shift to supporting the country’s reconstruction as the new political arrangements take hold, pledging an initial US commitment of $64mn to that end. Still, the conference focused less on rebuilding the country than on suppressing terrorism and combatting offshore piracy.

By chance, it was with Somali pirates that President Obama first claimed the mantle of toughness against terrorists, when in April 2009 he authorized Navy snipers to kill pirate kidnappers of an American vessel’s captain. And he can claim success in strengthening the international coalitions on Somalia—coalitions that began to take shape during the Bush administration: the one on the ground that has been winning the country back from Al Qaeda control, and the one at sea against pirates that has harnessed dozens of countries’ navies, many of which have never cooperated with each other.

Still, the gradual restoration of peace in Somalia is hardly something for which American voters will reward a president. The country is obscure, and the progress is slow and very tentative. Indeed, all that can be claimed, UN Secretary-General Ban Ki-Moon reminded leaders in London, is that "we have opened a space for peace and stability in Somalia. It is a small space but it presents an opportunity we cannot afford to miss."

*[This article was originally published by The Century Foundation's Blog of the Century on February 24, 2012.]