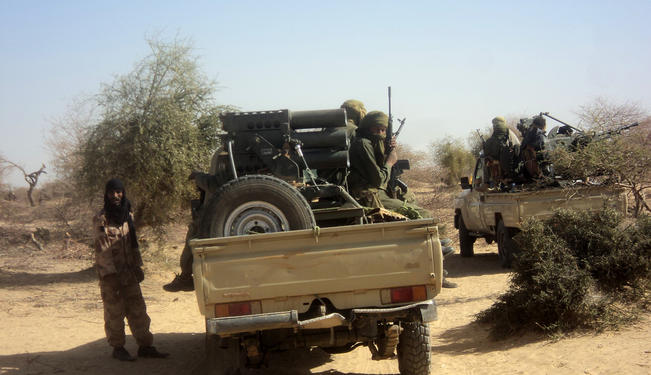 Although the jihadists in northern Mali share the same radical Islamist substrate, we were expecting to see Iyad Ag Ghaly’s Ansar Eddine (AD) movement cloak itself in a more moderate attitude in return for having obtained a respectable status in the Azawad conflict. This was the wish expressed by several international mediators—namely Algeria and Burkina Faso—given the different meetings held in Algiers and Ouagadougou. But some visible signs demonstrate an accord among the different jihadist groups that is too broad to avoid a collision with the international community.

In the start of the negotiation process, Iyad Ag Ghaly appeared to be the right interlocutor—someone who only had local demands, had never taken part in international terrorism, and promised to fight against drug traffickers and organized crime. There was, until now, a thin line that separated him from terrorists like Abu Zeid, the head of Al Qaeda in the Islamic Maghreb’s (AQIM), Katiba Ibn Ziad, or veteran Mokhtar Belmokhtar, a recent AQIM dissident who founded a new katiba named "Signatories by Blood.”

We are dealing with a three-faced jihadism: one that provides essential public services to dominated populations (the main one being the safety of people and property), one that is the face of brutality—including the terror of summary justice and violence  in the name of sharia. The third and final face is that of collusion with organized crime and drug trafficking.

While some countries did not want to launch a foreign military offensive without exhausting all possibilities for peaceful resolution (see: “Goodbye Afghanistan, Hello Mali!”), large portions of the international community insisted that the two Malian adversaries first explore all paths of discussion. But neither Bamako, AD, nor the National Movement for the Liberation of Azawad (MNLA) seem to have been sincere in their efforts to make compromises.

With the situation being dynamic and volatile, the events of the previous weeks also paint a new configuration where the chances of peace are dwindling. This is a situation where the two protagonists—Bamako and AD—seem to have applied Carl von Clausewitz’ saying, "War is a continuation of politics by other means."

For the next round of talks in Ouagadougou, originally scheduled for 10 January 2013, the transitional government in Bamako, as well as the AD movement, have publicly demonstrated firm and distant positions. On 31 December 2012, in an interview with Jeune Afrique magazine, the Malian government’s Minister of Foreign Affairs, Tieman Coulibaly, used language that can hardly be considered diplomatic. He prioritized a military intervention in the near future. Elections were postponed until after forces regained the North. He also held a radical position toward the rebels with whom he was about to enter into discussion:

Kidal is a region of Mali and it will be governed according to the laws and principles of the Malian constitution. Ansar Eddine does not represent the population of Kidal. It cannot enact Sharia or other laws that are inconsistent with the Malian Law. As long as Kidal remains in Mali, this will be the case.

In short, Bamako says there is nothing to discuss except the surrender of the armed Islamist groups. Is the Malian army reinvigorated to the point of launching a campaign of re-conquest immediately? Contrary to articles emanating from a blindly chauvinistic press and the exacerbated speeches from southern Mali, nothing seems less certain.

The immediate reaction of AD was to suspend the agreement to cease all hostility with Bamako, an agreement the MNLA co-signed on 21 December in Algiers. As a result, jihadists are mobilizing their troops. From its part, the diplomatic delegation of AD sent a "political platform" on 1 January to the Burkinabé President, Blaise Compaore. This seventeen page document calls for the end of secularism in Mali and a new constitution proclaiming the "Islamic character" of Mali. It asks primarily for "broad autonomy" of Northern Mali with the "strict" application of sharia.

But unlike the static posture of Malian army units, jihadist troops and militants have previously made ​​a number of military and political maneuvers, leading to a restructuring and strengthening of their forces on the ground. In mid-November, the jihadists of Gao, (those of the Movement for Unity and Jihad in West Africa with elements of the katiba “Signatories by the Blood” of Mokhtar Belmokhtar (MUJAO-SPS)) entered Menaka, East of Gao, after heavy fighting. To the West of Timbuktu, units of MNLA integrated with AD and others took refuge in Mauritania after giving their vehicles and weapons at the border to the Mauritanian authorities. On the Algerian border, jihadists disarmed and confiscated the vehicles of an Arab tribal militia, the Arab Movement of Azawad (MAA).

On 31 December, the MUJAO-SPS took control of Al-Khalil, a few kilometers from the location of Bordj Badji Mokhtar in Algeria and a very short distance from an important Algerian military base. On one hand, this suggests the  influx of Malian refugees into Algeria and other neighboring countries. On the other hand, this recent situation risks disrupting contraband circuits, which could be felt through the lack of necessary products in Azawad (see: Algeria and the Malian Borderline Disorder). The MNLA now control only the region of Tinzaoutine on the Algerian border. Without the help of the Algerian authorities, Tinzaoutine would not not be able to resist a jihadist assault for very long. With a sense of urgency, the MNLA organized a three-day congress there, starting 7 January. The MNLA is gradually sliding from an active player in the Azawad conflict to the role of a spectator with no influence on the ground. Moreover, Ansar Eddine sent a delegation to Tinzaoutine to demand that the last military units of the MNLA either integrate into Iyad Ag Ghaly’s movement or give up combat and abandon their armaments. Additionally, during a tour in the west of Azawad, Iyad Ag Ghaly received the support and allegiance of several tribes. This tour was preceded by similar tours in the east and north.

Thus, the jihadi movements, Ansar Eddine, MUJAO-SPS, and AQIM seem to have collaborated to control the territory of Azawad through different military and political approaches. The alternative forces of MNLA, MAA, and probably National Liberation Front of Azawad (FNLA) are now marginalized. At the same time, the jihadists have created new katibas oriented along ethnic lines, such as the Songhais, Moors (Ansar Sharia), and others.

An Offensive Geared Towards Mopti to Influence Negotiations

During the last few days, dozens of vehicles and around three hundred of Ansar Eddine’s combatants have been spotted moving towards the south. They have entered into a village called Boré, on the national route RN 15. This strategic route, with multiple villages, may be at stake during combats these next days; whoever holds the route effectively controls this territory.

Heavily armed combats and exchanges with the Malian army have taken place on 7 January in Konna as well as Sévaré. In this last location, the objective was to disrupt the Mopti airport’s function as a strategic base for reinforcements, arms, munitions and rations. The strategy of the jihadists may be to harass the Malian military on a broadened front and to exhaust the Malian forces by cutting their access routes and by interrupting the commercial flow on the Niger River. This way, they could hold a partial siege of the city of Mopti. It must also be noted that if the jihadists know how to utilize guerrilla tactics, the Malian army has not yet been able to prove its efficiency in using mobile armed units in pursuit of rebels.

It is hardly likely that jihadists will attack the city of Mopti head on, given its population of 120,000 and the several military quarters. The primary purpose is to allow for the movement, led by Iyad Ag Ghaly, to come to the negotiating table in a strong position. The head of their delegation at Ouagadougou, Alghabass Ag Intallah, just demanded the postponement of discussion until 18 January–enough time to obtain a political success (a rally of the last forces of MNLA at Tinzaoutine) or a military success (the fall of a location like Konna).

As Carl von Clausewitz said, “War is merely the continuation of policy by other means,” yet it would be necessary for Bamako to have the means to implement this policy. It is the moment of truth for the new Malian army. Is it capable of reacting and recapturing the area around Mopti? Any static or defensive attitude would amount to nothing less than defeat at the level of diplomacy.

A version of this article was originally featured by Jadaliyya. The piece was originally published in French on Un regard averti sur l'Algérie et le Monde. It was translated to English by Allison L. McManus and Mickael Vogel.