We may not like what President Donald Trump is saying about the World Health Organization (WHO), China and the world at large. In fact, we do not like it at all, but Trump has a point, and acknowledging it would empower us to address him in earnest, with honesty and efficiency.

The world is led by two things: bombs and dollars — a carrot and a stick. The United Nations is no different. While the strong prefer to see the world the way it is, the weak prefer to paint themselves a pretty picture and complain whenever reality fails to meet their imagination. This self-infused bipolar syndrome is in the interest of the strong, for it keeps the weak in a permanent state of sedation, exposing them to exploitation.

Africa is a classic case in point. After years of exploitation by the West, Africans seem to wish for a kinder master: Beijing. However, recent images of mistreatment of Africans in China give us a taste of how that would work out. They confirm the ancient wisdom that a new master is just as oppressive, if not more. One is invariably best served not by a master but by oneself.

The Emperor is Naked

For all his sins, Donald Trump has the merit of removing the veil regarding mastery. He speaks the language of truth: money. Trump believes that if his government gives more of it to the UN, America should get better treatment at the international table. This has always been the case, but the US president strips away the pretense. It is known to everyone that big contributors get VIP seats at charity events.

Trump’s premise is not skewed — it’s just uncomfortable. Acknowledging that premise will empower us to break it down to the US president that hefty UN contracts go to American firms, that the UN headquarters are based in New York, that American citizens occupy top positions in UN agencies and that member states are incapable of adopting international sanctions against the US and its allies, let alone enforce them. In other words, the US gets a good return on its investment in international systems. Washington and its allies can and do violate international law frequently and with no consequences, while the rest of us remain its prisoners.

So, Trump’s decision to cut WHO funding will affect the US more than it will affect the WHO. The WHO and Dr. Tedros Adhanom Ghebreyesus, its executive director, will survive without American money.

Tedros is employed by the WHO’s Executive Board that comprises 34 members selected from the UN General Assembly on a rotational basis. The executive director reports directly to the UN secretary general. Both entities find Tedros’ performance outstanding in response to the novel coronavirus. Any resolution initiated by Trump in the UN Security Council to have him removed would manage two out of five votes at best. Only the UK is likely to vote with the US. In other words, Tedros is untouchable.

There is a strong chance he might outlive Trump in office. Furthermore, while the US contribution accounts for around 25% of the WHO budget, UN agencies are capable of fundraising on a bilateral basis. As the US announced its withdrawal from WHO, China, which seems to have been the source of the WHO’s misery, has pledged $2 billion over a period of two years in a historic speech by President Xi Jinping at the opening of the 73rd World Health Assembly on May 18.

That’s not all: Xi took the opportunity to announce the creation of a WHO global humanitarian depot, essentially making it the UN world’s pharmacy, among other exciting measures, especially targeted at developing countries. The US seems to have served the UN to China on a silver platter. This is a colossal strategic error by Trump and an uncertain prospect for the rest of the world.

What Can Africa Learn?

Where does this change leave Africa? Africans would be wise to learn a thing or two from Trump. This world isn’t as flat as they imagine it to be. No one hates or loves Africans. All nations of the world, except African ones, are enlisted in a race for power and influence. It is high time for Africans to get their act together and join in, instead of complaining from the sidelines. Their nations may be weak but, united as a continent, Africans could be strong.

Let me illustrate. India is a multiethnic society much like Africa. It was colonized for longer than Africa. After years of talking about peace and disarmament, India initiated its nuclear program. As soon as it did so, the balance of power in the region tipped in its favor. It was only a matter of time before it would have had the upper hand in the Kashmir region. In due course, the entire region could have been unilaterally annexed, and even Pakistan as we know it could have ceased to exist.

From then on, alea iacta est — the die had been cast. In 1965, Zulfikar Ali Bhutto, then prime minister of Pakistan declared: “If India builds the bomb, we will eat grass and leaves for a thousand years, even go hungry, but we will get one of our own. The Christians have the bomb, the Jews have the bomb and now the Hindus have the bomb. Why not the Muslims too have the bomb?”

Sure enough, they got their bomb. In January 1972, Pakistan rallied scientists to build an atomic bomb for national survival and, on May 28, 1998, a few weeks after India’s second nuclear test Pakistan, detonated five nuclear devices of its own. Islamabad claimed that their nuclear weapons were not for offensive purposes but were developed to give Pakistan “nuclear deterrence capability.”

Unlike big powers, Africans have been weak and divided. These two capital sins never allowed them to have the bomb and the money, the only two things that rule the world. Yet Africans should not forget they have leverage. The uranium that was used in the two infamous American bombs dropped on Hiroshima and Nagasaki came from the Democratic Republic of Congo. If one African country attempted to develop the bomb on its own, it would be eradicated from the face of the earth.

That is what happened to Libya. However, if Africa as a continent developed a bomb together and established a nuclear deterrence post somewhere, say atop Mount Kilimanjaro, no single country could be sanctioned. The entire continent could not be bombed to oblivion by the US or NATO. All of Africa would then become secure.

Ironically, when it comes to Africa, Trump is reading from a script written by his liberal critics. They want to help poor Africans. Western media and their experts never cease to mention aid when they talk about Africa. The truth is that Africa does not need Western aid. Africa needs unity, organization and ambition. In any case, aid represents a meager 2% of Africa’s GDP. In contrast, capital flight from Africa to the West is about 45% of the continent’s GDP. If France says it is withdrawing aid to West Africa, the right rejoinder is not to appeal to French President Emmanuel Macron’s sense of solidarity but to tell France that Africa will kick out Areva, Bolloré and Total in response.

Luckily, Macron is a reasonable man. Unfortunately, Trump is a bully. The only effective way to deal with bullies is standing up to them, not appealing to their non-existent generosity. Africa must unite behind Dr. Tedros. He will not resign from his job. Other nations and private money will fund the WHO when Trump pulls the plug.

Lately, African leaders and thinkers have been speaking more frequently with a common voice on international matters. We welcome this. But they remain weak as long as they do not have the bomb or the money. To quote Nelson Mandela, “A person in chains does not negotiate.” Amid a global crisis, it is incumbent upon Africans to not be comfortably numb. To borrow a quote from a European statesman, Winston Churchill, “Let’s not let a good crisis go to waste.” They must think creatively and act speedily to make their own bomb, earn more money and protect their earnings and their people. Africa Needs Its Own “New Deal” 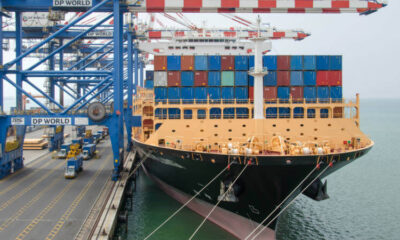 Did Djibouti Just Jeopardize Investment for All of Africa?