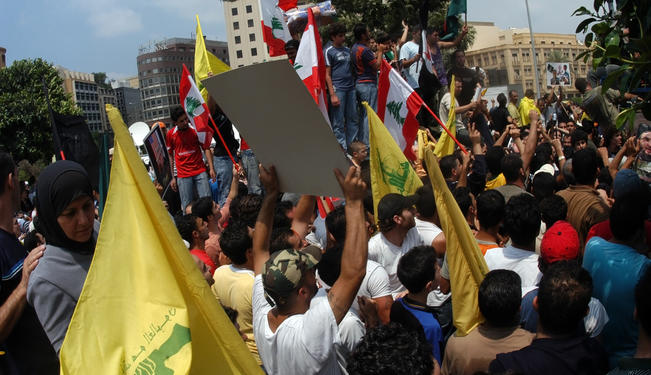 Not all Shi’ites support Hezbollah and not all Jews support Zionism. A response to Josef Olmert.

While I appreciate your understanding of the nuances of “modern” Middle Eastern history, I believe your analysis of the region’s socio-political dynamics is overly simplistic and dismisses any opportunity for the Middle Eastern population to express itself outside of its traditional “sectarian structure.”

Firstly, allow me to introduce myself, while conforming to the “sectarian” stroke with which you have defined all Levantines: I am a Christian Maronite Lebanese-American that grew up in the Catholic town of Zahle. Zahle falls within the largely Sunni-Shi’ite region of the Bekaa Valley, bordering the Alawite-controlled Sunni-majority country of Syria and the Jewish-controlled Sunni-Christian-Jewish country of Israel.

Born in 1982, I (luckily) grew up in a post-war Lebanon. During that period, southern Lebanon was controlled by Jewish-Israel with its typical flavor of paranoia, suppression of human rights, and disregard of national sovereignty. The rest of Lebanon was controlled by Syria with Alawite Assad’s signature iron-fist dictatorship. Having grown up much closer to Syria’s border than to Israel’s, my life was much more influenced by Assad’s attempt to crush our spirit of freedom, control every corner of Lebanon’s economy and politics, and suppress our society.

In your broad secular categorization of the Middle East, I must fall under the category of a Maronite that supported Israel’s invasion of Lebanon in 1982; a Maronite that is part of a “regional minority” that should support Hezbollah and Bashar al-Assad, the last bastions defending “minorities” from the invasion of a Sunni tsunami that is bound to come. I must have loved living under Assad’s violent and barbaric regime in Lebanon, since it meant that Christians were “protected” from the Sunni-Palestinians. While your article is an interesting academic exercise in geopolitics, it falls far short of the true facts on the ground. While I agree with your assumptions regarding the leaders’ motivations, I disagree with the idea that such leaders represent in any way the diverse populations of Shi’ites, Sunnis, Christians, or any other so-called factions that you have assumed they represent.

In your article, you mention: “Hafiz al-Assad said bluntly that Lebanon and Syria were one country, artificially separated by the machinations of Western imperialism. Therefore, he went on, Syria had a full right to intervene in Lebanon.”

Unfortunately, his claim is true. Zahle, my hometown, was the border of the Ottoman Empire’s state of Lebanon before the French Mandate expanded Lebanon into Syrian territory and formed what was called, Greater Lebanon (present day Lebanon). Prior to implementing the Sykes-Picot agreement and the Balfour Declaration, the West’s plans were to develop a pan-Arab state in alliance with Arab leaders. Such plans would have had their own set of disastrous repercussions, but this does not delegitimize Hafiz al-Assad’s statement: most borders in the Middle East are artificial, and most were created with British and French interests trumping those of the local people.

I had additional issues with other statements that I extracted below:

“Then came the Islamic Revolution in Iran, a Shi’ite eruption, which from day one was perceived by Saudi Arabia, Saddam Hussein’s Iraq, and other Arab Sunni states as a clear challenge to the long-held Sunni domination of the Arab Middle East.”

“The Shi’ites refused, claiming that they needed to maintain the militia in order to continue the ‘resistance’ to Israel.”

Not all Shi’ites support Hezbollah, not all Christians support Samir Geagea or Michel Aoun, and not all Jewish people support Zionism. The voices of moderate Shi’ites are suppressed by the bullying and tyrannical actions of political leaders. I would have expected that such moderate voices be acknowledged in an analytical article such as this one, particularly when the article’s author is a professor at one of the world’s leading universities and a supposed expert on the region.

“Here we have another illustration of the old Middle East rule that it is always convenient to use the classic boogeyman, Israel, at a time when the real motivation is elsewhere. In this case, it is the Shi’ite-Sunni War.”

First, the boogeyman is a fictional character in the lives of young kids. Israel is in no way fake, and many full-grown adults in the Middle East have every right to be scared of Israel and its tactics. I believe that calling Israel a boogeyman completely disregards the very real human, social, and political challenges that this country has brought onto the region. Furthermore, if a couple of leaders were leveraging fears of Israel for their own benefit, we cannot simply conclude that the only other real motivation is a secular Shi’ite-Sunni war.

Am I concerned that uprisings might fall in the hands of extremist leaders? Absolutely! Has it happened before? Of course! But does the fact that I am a Maronite encourage me to support one dictatorial extremist tyrant over another? No way!

That is because in addition to being a Christian Maronite from a Catholic town in the middle of a Sunni-Shi’ite region, I am a human being that cares for economic growth, social wellbeing, justice, freedom of expression, equality, rule of law, national sovereignty, and many other philosophical and practical concepts that trump the religion which I was born into.

With all best wishes,