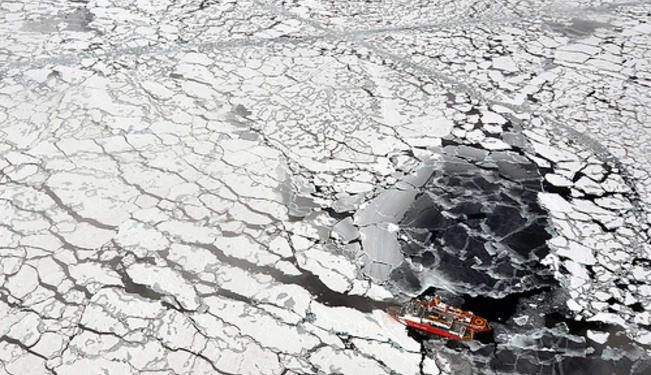 The effect that climate change has had on the Arctic, and commentary on various efforts to control the resources of the region.

The impact of climate change in the Arctic has resulted in unprecedented melting of sea ice. Climate change is in the news mainly because of the way melting has made resource extraction, particularly from petrochemical reserves, more accessible. Less thought has been given to other equally important issues, such as how climate change will impact regional health and safety as traditional food sources become inaccessible, traditional hunting methods fail, and buildings collapse from unstable structure. Add to this the environmental damage generated by potential oil spills and other resource access-induced disasters, the need to reconsider and reinforce indigenous interests and land claims generated by the UN Declaration on the Rights of Indigenous Peoples, and the limitations on how the Arctic Council develops regional standards and practices.

Unlike the situation in the Antarctic, where treaties bind nations by law, the Arctic Council has no legal force in the Arctic region. It has, however, developed something else—a consensus by all Arctic nations to work together in dealing with the region’s challenges. This includes expanding its raison d’être from that of an environmental watchdog dedicated to environmental and scientific issues requiring regional action, such as monitoring the presence of pollutants or protecting Arctic fauna and flora, to a body concerned with increasing international awareness and action towards issues such as sustainable development and general access to health and education.

The Arctic Council is a cooperative institution that raises issues and develops consensus. Its interest is with the entire Arctic region and not any particular nation, although some nations are more powerful than others within the council. The United States, for example, is an important member state and has made numerous contributions to the body’s successful functioning. However, its individual bias gives more attention to science and health concerns while social issues are given little attention. There is evidence that this bias is changing though, resulting in a broadening of the council’s vision.

At the same time, international attention has shifted from issues the council has been traditionally concerned with (“human” and “environmental security”) ))to those they had not previously addressed and which, it could be argued, have been successfully kept off the table – namely territorial and sovereignty issues, conflict resolution, and building “peace” in the region.

The Arctic Council indeed cannot determine these issues. International law forces territory and boundary claims to be adjudicated by a specific, and different, international body whose jurisdiction is not regional, but global. According to this UNCLOS convention on the law of the sea, the pertinent states to deal with issues surrounding Arctic boundaries are coastal states—those that border the Arctic Ocean. Of the eight Arctic nations represented in the Arctic Council (Canada, US, Russia, Iceland, Finland, Sweden, Denmark, and Norway) only five qualify (Canada, US, Russia, Norway, and Denmark).

Canada, US, Russia, and Denmark are actively engaged in activities designed to stake territorial claims in the Arctic Ocean. This means that if the Arctic cooperation agenda becomes increasingly focused on territorial claims, as it seems to have been doing the past three years, there will be marginalization both for Finland, one of the founders of the “environmental agenda” that led to the historic Arctic co-operation agreements of the 1990s, and for Sweden, the Arctic Council Chair from 2011 to 2013. Iceland will also be left out of the equation, despite its maritime environmental setting and close proximity to the Arctic Ocean.

This structural and historical disconnect raises several potential challenges for the future. One is the way the consensus-based Arctic Council is being sidelined in the popular imagination by a rhetoric devoted to resource and territorial competition. The new “Cold War”, or race for the Arctic and its “icy treasure trove” appears to be a more interesting and common scenario used to portray the current situation in the North. Countries like Russia and Canada have contributed to this rhetoric.

Another challenge is how the Arctic Council has been divided into two camps: the inner and outer coastal states. The former are considered to be the actors with legitimate “state” interests who are authorized to act on the stage of international law, while the latter are not. This sends a potentially mixed message regarding the continuing significance of regional political cooperation. Indeed, it has already engendered protest from both the US and indigenous Arctic peoples’ organizations.

The region’s cleavage by national interest and territorial claims is to be expected and is not particularly troubling because international rules and the mechanisms for peaceful cooperation are well established. It is probably inaccurate to see the Arctic Ocean as a place where cooperation will be shattered by competitive national discourses and territorial claims. All nations staking claims to the Arctic Ocean are following UNCLOS rules; they are mapping the ocean floor and undertaking scientific exploration to meet the Commission on the Limits of the Continental Shelf (CLCS) process. They have also affirmed the importance of UNCLOS and their desire to abide by it in the IlulissatDeclaration Agreement of 2008.

Therefore this most recent round of interest results not from a remilitarization of an old Cold War front but from the intersection of new, different opportunities in context of a regional political cooperation (under the Arctic Council). None of the eight Arctic nations that belong to the Arctic Council are truly suggesting a “go it alone” approach. Indeed, the geopolitical history of the Arctic as a region over the past two decades has been one of increasing cooperation and has resulted in the building of civil society through inclusion and cooperation efforts among nations, NGOs, indigenous peoples, and a variety of institutional actors.

For this reason, brazen territorial claims and bold militarization may not be as close at hand as media pundits predict and maritime claims will likely be resolved in an orderly process. What is troubling is not the fear of an armed regional conflict, but the fact that this discourse detracts from a more substantive understanding of how co-operation needs to proceed and how a broader-based human security needs to be developed in the North.

The potential militarization of the Canadian North, for example, as promised by the Canadian Government (again arguably a discourse designed to please a domestic audience) is a case in point. Canada’s Prime Minister Harper recently promised navy ships and deepwater ports with an increased military presence to signal Canadian sovereignty over its Arctic territory. While a military presence may or may not be a reasonable response to the shrill territorial competition rhetoric of recent years, there is little public discussion of how such military initiatives affect funding and programs in other areas of the Arctic that might have social, health, and educational impacts.

Funding dedicated towards military ends needs to be understood and evaluated against a backdrop of regional housing shortages, lack of health and educational opportunities, limited economic opportunity, historical neglect by southern Canada, and rampant substance abuse among its youth. What do indigenous populations believe to be the issues and solution? Why is nearly a millennium of occupation by indigenous Canadians not enough to secure Canadian claims to the region? Does this redirection of Arctic issues towards a militarized definition of security challenge a regional agenda such as that of the Arctic Council’s by deflecting attention and funding?

So the problem is that these substantive issues concerning quality of life, the lack of political power, and the limited control over how economic development and resource access is to proceed in Northern regions have taken a backseat to a discussion of what are the easier issues to resolve at the national level: Where will the territorial lines be and which governments will have what resources? Even Norway is in some ways an exception: because of its emerging, and potentially more conservative, approach to new offshore oil development, it has not been immune to the struggle for territorial claims. Moreover, its recent territorial agreement brokered with Russia in 2010 gave both nations a clearer understanding of the resource boundaries. Whether true or not, this agreement puts Norway on Russia’s side and heightens rather than dampens territorial tensions in the Arctic region.

So the significant and long-term impact of this focus on Arctic bounty—its orientation towards the “bonanza” of new resources and territory for outsiders—rather than environmental, economic, and governmental deficits within the North, is very real. Unfortunately, the greatest threat to the Arctic region and its inhabitants may not be territorial competition as a result of climate change, although this is a very substantial challenge, but the way in which competitive southern geopolitical and geo-economic discourses concerning development re-colonize the North and re-marginalize its peoples. It is ignoring the peoples’ voice, interests, and expertise in shaping their own future while promoting a competitive paradigm cultivated by media and domestic political agendas.

This makes comprehensive regional institutions comprised of state and non-state actors all the more important. Cooperative institutions like the Arctic Council attempt to cultivate an interest in regional issues such as the impacts of climate change, sustainable development and quality of life for northerners, and in this sense, the important story is not geopolitical but developmental. It is a quieter and ongoing discussion that is less likely to attract attention than international geopolitics playing out in the region, but arguably much more important.